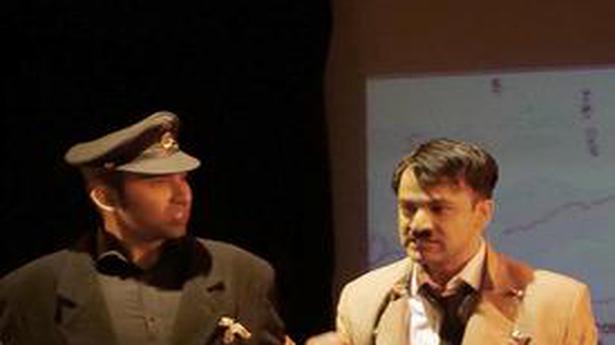 Set in the backdrop of World War II in Prague, Czechoslovakia, Bertolt Brecht’s Schweik In The Second World War is a retelling of Jaroslav Hasek’s novel, The Good Soldier Švejk. Theatre personality Ranjon Ghoshal presents Schweyk, The Warrior in English. The play revolves around Schweyk, a good soldier, who survives World War I, and tries to survive World War II as well.

Schweyk is eventually forced into war, but lives through dangerous situations in the Gestapo headquarters, a military prison, and a voluntary labour service. The authorities, on the other hand, have even more grandiose plans than the first World War. Schweyk gets lost in a snowstorm near Stalingrad, where he meets an equally lost and bewildered Hitler, whose path is blocked by snow, frozen corpses, the Soviet Army, and the German people. The play gives an insight into the situation of the ‘little man’.

Schweyk, The Warrior , directed by Ranjon Ghoshal, will be staged by Forum Three Theatre, which has been presenting quality productions in the city for 40 years. Another highlight of the play is that it is being produced by well-known multilingual actor, Prakash Raj, who has had a long association with Ranjon, and is an avid theatre enthusiast and patron.

Ranjon says the play is relevant more than ever. “Schweyk is the common man, what Hitler describes as ‘the little man’. The common man wants education, healthcare and jobs, but the authorities call for war, under such circumstances, what does the common man do? This is the crux of the play. Brecht wrote Schweyk, The Warrior while he was in exile in California.”

The play has 22 characters and is a musical, with an original score composed by Sudipto Das and choreography by Antarleena Sikdar. “It took us six months to put the play together,” says Ranjon.

Schweyk, The Warrior will be staged on March 16 at 7 pm at Chowdiah Memorial Hall, Malleswaram. Tickets are on bookmyshow.com.

‘I want to try and surprise the audience’

When asked about his decision in The Zoya Factor, Dulquer Salmaan is emphatic, “It was a bit of a no-brainer for me,” he says. It’s his second Hindi film after the Irrfan Khan-starrer Karwaan (2018). Approached by producers and long-time friends Pooja and Aarti Shetty, Salmaan agreed swiftly to do the film. He had been […]

This is what SJ Suryah is dreaming about in ‘Bommai’

This is not exactly Being John Malkovich but we find ourselves inside the head of actor-director SJ Suryah on a bright and sunny afternoon. He is dreaming, and he has a dream girl for company. The portal that leads us into this castle in the air Suryah has built is the Thaamara Studioz in Vadapalani. […]

When illusionist David Copperfield sat down with 15 Indian magicians

“Why do people like magic? Because lives can be full of problems, but with magic they can escape them for a while,” says David Copperfield. This, he believes, is the responsibility of magicians: to occupy people’s minds in such a way that they forget about their worries for even a little while. For the first […]