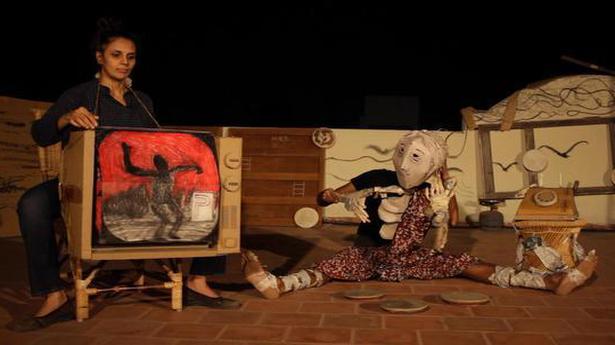 As an old woman goes about her daily chore of sorting lentils, her mind wanders. Her memory revisits instances from her past, and poignantly she realises the passage of time. Woman Cleaning Lentils — a poem by Armenian poet Zahrad, is what inspired Lentils and Stones, a collusion of theatre, puppetry and dance, which will take to stage this weekend at Adishakti Theatre, Puducherry. Conceived by Vijay Ravikumar as part of the Take Flight support and mentorship programme by Perch Collective, Chennai, the play focusses on the natural concept of ageing.

Vijay, who has been part of Perch Collective as an actor, says that the production, being staged for the second time, is “still evolving”. Each time it is performed, a new dimension takes shape. “In the story, the woman realises that unseen domestic work that swallowed her adult life, scooped her up as a child and deposited her off in the present, as a lonely old woman,” he says. As the storyline goes forward, her television watches on, “in a curious reversal of roles”. The television wishes to understand this woman’s paradoxical relationship to her past. While Vijay plays the protagonist’s role, manifested through puppetry, the television too comes alive as a puppet. “The play uses the poem to explore memory and labour, and the general theme of ageing,” says the director.

How did the idea of using puppetry come about? “I have been working with puppets since 2001, on and off. In this production particularly, the characters do not speak as they would in real life. It’s a very evocative character trait that makes you read between the lines and puppets, I thought, will work well in that setting,” concludes Vijay who plans to bring the play to Chennai and Bengaluru soon.

Lentils and Stones will be staged on July 20, 7 pm at Adishakti Theatre, Edayanchavadi Road, Near Auroville Post, Puducherry. Entry is free for all.

‘Kuppathu Raja’ is a bit like ‘Gemini’: GV Prakash

The shy music composer who was introduced to audiences in 2006 has grown up to act in author-backed roles and dance in kuthu songs. When GV Prakash debuted as an actor in 2015, people were unsure how long it would last. Today, the actor has completed films with Bala and Rajiv Menon, and will have […]

Despite the final season of Game of Thrones coming in for criticism from fans for its character arcs and ending, the HBO show today bagged the most awards at the 2019 Creative Arts Emmys. Considered the technical equivalent of the main Primetime Emmy Awards event that is scheduled to be held on September 22 in […]

In the corner of Vincent Van Gogh’s Starry Night, is the moon, facing away, as if ready to exit the frame. This very moon is the centrepiece of Tabrez Alam’s work of art. The cheesecake yellow backdrop is embellished with the silhouette of Elliot carrying ET on his bicycle, riding across the sky — and […]