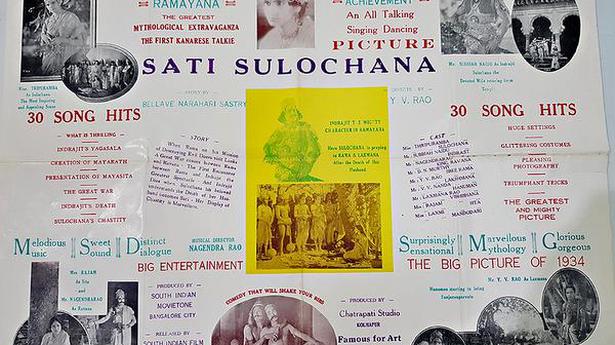 Sati Sulochana, the first Kannada talkie, was released on March 3 in 1934, and the day is now marked as Kannada Cinema Day. Details of what went into the making of this film are being pieced together now, thanks some newly found material. This might help rewrite the history of the infancy of Kannada cinema.

Till date, it was believed that Sati Sulochana had 18 songs. Now, a gramophone record jacket, found in the private archive of writer Vijaya Subbaraj — whose father, Seetharam, worked with South India Movietone that produced the film — shows it had as many as 30 songs.

Ms. Subbaraj handed over priceless materials related to the film, including screenplay of some of the scenes, lyrics of the songs, articles, poster, photographs, newspaper reports, and brochures, to film historian N.S. Sridharamurthy. He is now putting together the pieces of evidences to reconstruct the history of Sati Sulochana.

Ms. Subbaraj told The Hindu, “There was some material in our house. Also, my paternal uncle C.T. Sheshachalam had joined Gubbi company [Gubbi Veeranna’s theatre company] when he was 10. He played the role of Narada in the film Sati Sulochana. Sheshachalam’s daughter had got some archival material of the film from him and she handed them over to me. I gave them to Mr. Sridharamurthy hoping that history of the first Kannada talkie should be re-written.”

Mr. Sridharamurthy said he was surprised at the materials found. The materials found reveal that 8 RMP (revolutions per minute; speed at which a record is played) gramophone records of Sati Sulochana were imported from Columbia Records. Publicity material found mentions that the film has “melodious music, sweet sound and distinct dialogue”.

Mr. Sridharamurthy said, “The sad thing is that we have the gramophone record jacket but not gramophone record or celluloid reels of the film. I even checked with the family of producers. They have nothing pertaining to the film.”

I try to be fearless when I pick my films: Aditi Rao Hydari, who is looking forward to ‘Sufiyum Sujathayum’

The actor on OTT platforms, being a multi-lingual artiste and her choice of roles Source Related

The Buddhas of Pakistan

Just when yours truly thinks he is being helpful in suggesting to Naman Ahuja that he visit the Gurusaday Museum in Kolkata’s Joka, the cheery 44-year-old art historian tells me that for his 2013 exhibition ‘The body in Indian art’, held in Brussels and New Delhi, he had chosen a Jamini Roy painting of a […]

‘This is the longest journey from me to myself’

Torch-bearer of the Patiala-Kasur gharana, Pandit Ajoy Chakrabarty will impart advanced training to a selected group of Indian music students as part of an educational initiative by the NCPA. To select participants for this workshop, the NCPA has invited applications from across the country, though a preference will be given to those who have at […]