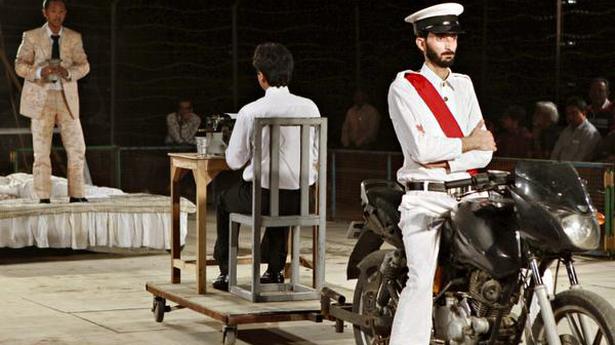 Perhaps, one of the fallouts of the digital age is that images — accessible, easily reproducible and viscerally charged — speak louder than words, and now more than ever before. In theatre, the still photograph is very often the artefact that carries a production into a posterity of some distance. The first totem of an unlimited archive, aside from the title, is the ‘display image’. If one were to pay attention to neatly tucked away credits, a legion of photographers emerge as custodians of what has been an eternally ephemeral art almost born to be forgotten. There are many claimants to the ownership of a theatre visual — the expressions of actors, the hues and alignments of light and material, the director’s vision lurching at the back — but there is one author, the photographer, whose gaze illuminates the memory of a transient moment experienced live only by those in an audience, in many different ways.

It has been a little more than a month since the passing of S. Thyagarajan, the photographer whose long association with the National School of Drama (NSD) spanned almost four decades. Starting out as a darkroom attendant in the early 1980s, he rose to a position of senior photographer at the campus, and was single-handedly responsible for what has become an invaluable theatre repository of thousands of still images. Over the past few weeks, glimpses of his sheer prolificacy have emerged on social media timelines as practitioners paid homage to a master of his craft, one with a higher name recall than most lensmen in the business who work assiduously behind the scenes with little recognition for their contributions.

In recent years, a gallery at the school during the Bharat Rang Mahotsav (Bharangam) was dedicated to Thyagarajan’s photographs, bearing testimony to his tireless legacy. In this collage-style wall-to-wall showcase, many of the photographs possessed the quality of garnering our singular focus to the exclusion of everything else, transporting us immediately to the realm of a living-breathing production. Live performance is all about changes in time and space and lighting, and often operates at a distinct remove from the freeze-framed ‘instant in time’ that photography concerns itself with. Here, it is as if two pantheons emerge in Thyagarajan’s collection of ‘best moments’, that of the carefully pre-arranged publicity photograph, with its distinctive aesthetics, and the live photograph that is almost always candid and spontaneous.

The most recent edition of the Marg quarterly, dedicated to academic essays on theatre practice, is a de facto tribute to Thyagarajan’s oeuvre. Several of the writers and practitioners in focus, like Anamika Haksar, Maya Krishna Rao, Zuleikha Chaudhari, Deepan Sivaraman and Abhilash Pillai, have had their works immortalised by his lens. The cover photograph is his evocative still from Neelam Mansingh Chowdhry’s adaptation of Manto’s stories, ’Bitter Fruit’, featuring women masked with white handkerchiefs and dark glasses. In the inside pages, are photographs from Rao’s Ravanama and M.G. Jyotish’s Sagarakanyaka, examples of Thyagarajan’s work with practitioners across India.

Further examples crop up in any theatre-related book one might chance upon. The Routledge Handbook of Asian Theatre, for instance, features an animated capture of a scene from Behular Bhasan, a Univeristy of Dhaka production from 2006 that was performed at the Bharangam, hence coming under the coveted purview of Thyagarajan’s view-finder. In Learning Through Theatre: The Changing Face of Theatre in Education; a photograph from an NSD TIE Company production of Pandita Ramabhai. In Gendered Citizenship: Manifestations and Performance; searing moments from Dialogue (a performance of Sophocles’ Antigone and Tagore’s Muktadhara) and Santhal Family, an art-installation-cum-performance. In The Performance of Nationalism: India, Pakistan, and the Memory of Partition; a scene from Kirti Jain’s Aur Kitne Tukde featuring Harnam Kaur as a failed martyr.

These are glimpses into a theatre of patronage that very seldom travels beyond the bounds of an institution. Yet, it is an institution that has also brought to its auspices hundreds of Indian and international productions. Hence, the performing history captured by Thyagarajan is not just a chronicle of institutional theatre, with its particular trappings, but also a far less visible timeline of national theatre caught in a state of flux.

Straddling the quotidian and the celestial

N.S. Harsha’s exhibition Recent Life features his works from the last two years that reveal an expansion of his palette, unique constructions of pictorial spaces, and a conscious scaling down in size from his distinctive panoramic paintings. Harsha’s works integrate elements from everyday life in Mysuru, where he grew up and currently lives. “He knows […]

Salman Khan’s much-anticipated Dabangg 3 trailer was released on Wednesday evening, with the actor reprising his smash-hit character Chulbul Pandey. Other regulars like Sonakshi Sina and Arbaaz Khan will also be seen in the third installment of this franchise, that is directed by choreographer-actor-filmmaker Prabhudeva. Prabhudeva and Salman had earlier collaborated for a hit in […]

HCL Concerts, amidst the COVID-19 lockdown, has launched an online concert series, ‘HCL Concerts – Baithak’, featuring several accomplished Indian classical artistes. ‘HCL Concerts-Baithak’ series, which is free to view online, spans two months and features performances by over 25 established and upcoming artists . The performances will be streamed live on the Facebook page […]