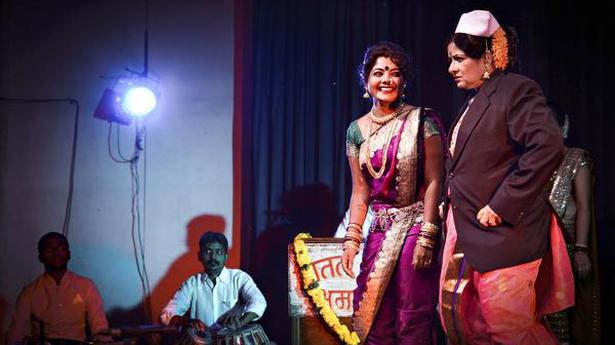 What do the ancient Tamil folk form of parai attam, Soviet era surrealist Daniil Kharms, a bevy of bodacious lavani dancers from Maharashtra, Simon and Garfunkel obsessives from Bengaluru, a Carnatic-inspired indie group and frenetic drag kings from a thriving if fictional queer revue culture have in common? Arguably much more than meets the eyes, if one were to connect the dots with a degree of doggedness. However, you could save yourself the trouble and head to salubrious Adishakti in Puducherry, where a motley crew of performing artists have assembled this week for what is the fifth edition of the ‘Remembering Veenapani Festival’, an annual event that pays homage to the popular art residency’s inspirational guiding spirit and now guardian angel — Veenapani Chawla. The selections are eccentric enough, especially when compared to the predictably-curated arts fests elsewhere, and is almost an ode to Chawla’s own famously eclectic predilections.

A glance at the itinerary would certainly satisfy those looking to match the programming with the aforementioned listicle. For instance, the Buddhar Kalaikuzhu, an atypically mixed-gender troupe engaged in both performance and pedagogy of the ancient percussive form of parai attam, was an early act in the free-for-all festival that commenced on Monday at Adishakti’s open-air amphitheatre. Thursday evening will see a performance of Chennai-based Perch Collective’s Mondays are Best for Flying out of Windows, the intriguingly named new production by Rajiv Krishnan, based on the writings of the rebellious Kharms, a writer often persecuted by the monocratic regime that ran parallel to his prime. In one story with a self-explanatory title, ‘The Plummeting Old Women’, elderly women topple out of windows (possibly on Mondays, as Krishnan’s title has it) and are smashed into smithereens like old china. The piece was commissioned by the Serendipity Arts Festival, and Adishakti was among the spaces where it was nurtured into being.

The weekend ushers in Mumbai productions, including the effulgent Sangeet Bari with its collection of vintage love poems written by men but performed by women with a sheer abandon that might only be rivalled by the effervescent Shammi Kapoor — one of the drag acts in The Gentlemen’s Club aka Tape, which closes the festival. Like Kharms, the art of lavani is a hidden canon, and no less incendiary, and just one look from doyenne Shakuntala Nagarkar can throw the lid open on centuries of repression.

What marks this edition of the festival as different from its predecessors is its week-long programming. In the past, the festival took place over several weekends in a month. In another departure, this edition also did not run a crowd-funding campaign on a public platform. Adishakti’s continuing work in the arts is a testament to the fact that the falling of a giant tree still leaves behind an imprint that can sustain the legacy of its august presence. The year has certainly been special for long-time collaborators Nimmy Raphel and Vinay Kumar and the others who have made Adishakti their home. Raphel’s Bali, so typical of Chawla’s oeuvre yet so fresh in its spontaneity and vim, was flagged off exactly a year back, and opened this year’s festival, after a nationwide tour spanning multiple cities. Internationally, Bali was staged at Singapore’s Kalaa Utsavam Indian Festival of Arts.

It must be said that Adishakti has been at the forefront of community engagement within theatre, with its coveted acting workshops, residencies and collaborative works. It is an important part of an ethos of a growing symbiosis. An example of this is Perch’s Take Flight 2019, a modest grant announced by Krishnan last month which supports ‘the messy beginnings of creative ideas’, and is the group’s own way of extending the support they have received over many years. Paying it forward is just one of the ideas that has steadied Adishakti’s sails over the past few tumultuous years, both in terms of what it has humbly received and what it has generously imparted — knowledge and goodwill and an artistic temper that might well be an unstinting beacon to those who voyage in the temperamental waters that arts practice indubitably is.

Disclaimer: The writer is part of The Gentlemen’s Club aka Tape’s devising team

‘Kalki’ film review: a sorry show of a ‘mass entertainer’

A local goon runs out of the police station with flames eating up every inch of his body. Behind him, one catches the hero walking out with a swagger, donning dark glasses and with a cigarette on his lips. He then stands tall before the station display board and demands his subordinates to remove the […]

Nitika Kurian was sick of all the pining-for-lost-love songs. What is the polite way of saying “screw you”? she wondered. All that angst found its way into the 19-year-old’s debut song, ‘Phoenix’, a smooth R&B-soul track, which was released last month… and Nitika is still slightly dazed by its success — the track has garnered […]

Meet the 34-year-old lyricist Vivek, who, in a short span, has captured the hearts of a lot of people. He has worked with leading music composers including A R Rahman, Santhosh Narayanan, Anirudh Ravichander and Yuvan Shankar Raja. In 2018, his ‘Simtaangaran’ took social media by storm. The lawyer-turned-lyricist has several projects lined up this […]