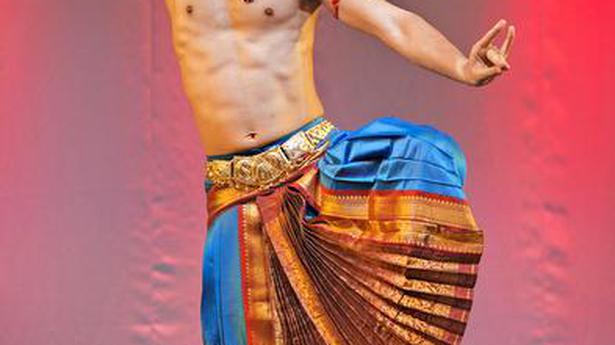 In a YouTube video that the Bharatanatyam dancer Revanta Sarabhai sends me, he is about to dance to a love poem. He has composed the poem with his mother, dancer and activist Mallika Sarabhai. He performs to a Tamil translation of this poem, now couched in the metre of the padam. In a shift from the usual romantic landscape of classical dance, one of forest groves, birdsong, and rustling leaves, Sarabhai mimes using a smartphone, placing a phone call. “Please, please, please,” he mutters, as the call goes unanswered. Shaking his head with a slight smile, he begins to dance, telling a story of love across the oceans. In everyday parlance, it’s about a long-distance relationship. This poem is one of the pieces that Sarabhai has included in his performance, In the Shadow of the Gods, in the city this week.

In the Shadow of the Gods is rooted in Sarabhai’s training in the Pandanallur style of Bharatanatyam. The programme covers a wide range of spatial, temporal and thematic concerns, from newly choreographed work to traditional Pandanallur pieces. Sarabhai has been dancing for over 25 years, and over time, he has seen his relationship with classical dance evolve. “When I’m on the dance floor practising, rehearsing an old piece, or learning a new piece, I’m still pushing myself to sit deeper in my aramandi, to bend further and stretch more in my adavus, so…there is a constant striving for better form, cleaner lines, a constant striving for that ever elusive technical perfection,” he says about his training. For Sarabhai, exploring the rasas, is an introspective process that helps in identifying and portraying through body and facial expression, numerous subtle variations of the basic navarasas.

It was while interpreting broader tropes from classical dance, that Sarabhai found himself casting an inward gaze on embodiment. Watching his teacher Maheshwari Nagarajan find multiple layers in a single emotion or situation gave Sarabhai the impetus to look inward and sharpen his abhinaya, eventually finding what he terms a certain “maturity” in his narrative work. The process of developing new work has led Sarabhai deeper into the classical vocabulary. The beauty of classical vocabulary and a testament to its timelessness for Sarabhai lies in that he’s using an ancient art form to create pieces that are radically modern in nature. “While I dance pieces about climate change or long-distance relationships, I still use the strictest of Pandanallur Bharatanatyam to do so, mostly because I haven’t felt that the classical language has needed any modification or expansion to be able to tell stories of present times,” he explains.

The relationship between mythology, deities, and classical dance is increasingly a fraught one, at a time when boundaries between religion and spirituality are blurred. How then, does Sarabhai balance the divine with the spiritual? He shares, “Almost all the pieces that form Bharatanatyam — or for that matter, any Indian classical dance repertoire, have to do with gods and goddesses. While I am dancing about things like long-distance love in these times of technology or the destruction of the earth, I’m not rejecting the traditional format of the dancer speaking to, or of the Gods.” Sarabhai says that he’s using the form as a vehicle to put forth a new idea. “The relationship between the dancer and divinity goes beyond traditional roles, with the former sometimes even questioning the relevance or existence of the latter. While the pieces in this show aren’t your typical bhakti pieces, they tell new narratives in the shadow of the Gods,” says the dancer.

Among the ashtanayikas, we often find female protagonists who pine for their absent lovers, away at work or at war. Sarabhai while playing the male protagonist in his piece, also pines for his lover, wondering why she can’t take his call and put him out of his misery. But he acknowledges that she has things to do, “That her work is as important” as his. In doing so, his work also evinces a questioning and recalibration of gender roles, where waiting and ‘longing’ isn’t the heroine’s default state of being.

In the Shadow of the Gods, by Revanta Sarabhai on May 9 at 7 p.m. at the Royal Opera House, Girgaon; for more details see: insider.in

‘Gurkha’ movie review: The one where comedy dies twice

Okay, let’s address the elephant in the room: the Tamil comedy scene is almost on the verge of extinction and beyond redemption, unless some writer miraculously pops up to save the dying art of comedy. In Tamil cinema’s universe, it’s easy to gauge the success of a comedian. A couple of hilarious films and it […]

Achal Mishra’s debut turns the lens on his ancestral home to build a portrait of changing times, nostalgia and an assertion of old values Source Related

‘I’ll have to learn the ropes on my own’

Saiee Manjrekar’s earliest memory of being on a film set involves Maggi. She was just four when the young actor, who makes her debut opposite Salman Khan in Dabbang 3, was hiding in her father and director-actor Mahesh Manjrekar’s (Vaastav: The Reality, Astitva) vanity van so she could eat noodles. A few years later, as […]