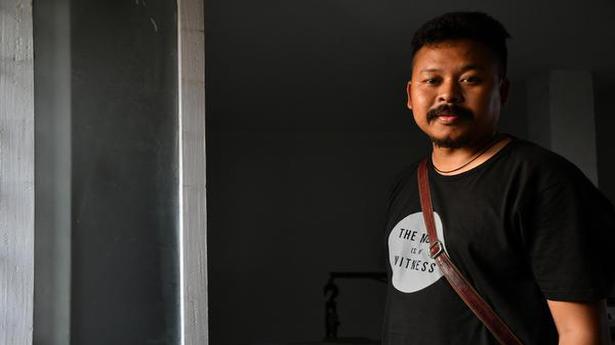 “It’s really hot here,” says Akhu Chingangbam, as we catch up with him on a sultry March afternoon in Fort Kochi. And then he says, “Back home, it’s beautiful right now”. Home is Imphal, where Akhu’s roots, heart and inspiration are, and where he keeps going back to through the length of our conversation.

Akhu is the founder-songwriter-frontman of the folk-rock music band, Imphal Talkies and the Howlers, known for their powerful stand and songs against the Armed Forces (Special Powers) Act and human rights violations in Manipur. There is also, in Akhu’s songs written both in his native Meiteilon and English, a fierce assertion of the Manipuri identity and a vehement resistance against efforts to annihilate their indigenous culture.

The lyrics of Stand United Against CAB, their latest song released on YouTube is unambivalent in its criticism of the Citizenship Amendment Bill. The song, says Akhu, came from his many sleepless nights, and it was put together without a plan. “Anyone who listens to it will know that it is a spontaneous song.”

Growing up in Manipur, violence was an everyday aspect of Akhu’s life. He would attend school, then go out to protest in the streets, the routine of most school-going children and what they deemed was normal. And like most Manipuris, he watched Bollywood movies and listened to Hindi songs, and believed he was as Indian as anyone else in the country. But Delhi, to where he moved to pursue higher studies, brought him the realisation that violence could not be the norm, and that he was an outsider. “I realised I was not one of them, and that was eye-opening.”

He took to singing in Delhi streets, at protest venues and found that music had the power to express his deep-rooted angst and anger. Akhu sings, “Is there a dream that we share from east to west?/Is there a song that echoes from north to south?”

But a lot has changed since 2008 when he formed the band and recorded the first album, says the musician. “I am not as angry as I was.” The credit he gives to the children he worked with as part of his project, A Native Tongue Called Peace. Since 2015, Akhu has been teaching music to the residents of a children’s home in Imphal. While making music with them, he is careful not to let politics seep in, for, he doesn’t “want to be yet another guy who runs an organisation to spread propaganda”. The project produced five original songs and has been a healing experience for children who came from broken backgrounds. Music uplifted their spirits and gave them confidence; for Akhu, it brought hope.

Hope came to him again last year, when the India Foundation for the Arts granted him a 14-month fellowship, with which he toured parts of Assam and Bangladesh to meet Manipuris living there. While the radical Manipuri poetry of the 1960s and 70s has inspired him, he had grown weary of going back to the same stories time and again. He wanted to look beyond the geographical boundaries and hear stories of his people who had fled Manipur in the 19th Century and settled down in other regions. In his quest, he stumbled upon a treasure trove of stories – of people whose notions of Manipur were still romantic and filled with hope. Out of his travels was born the album, ‘Ema gi Wari’ (Stories of my mother), with seven songs, all connected to each other that they seem like a story.

The Imphal Talkies gave the first public performance of their album at the Cabral Yard in Fort Kochi last weekend as part of the Kochi-Muziris Biennale. The band also performed at a show presented by Alt Wave in the city. The Biennale, says Akhu, has inspired him to go back to Manipur and organise the sixth edition of the music and arts festival, “Where have all the flowers gone”; commemorating American folk singer, Pete Seeger.

There are days when the musician finds the going a tad difficult, especially after an accident last year left him deaf in his right ear. “Sometimes I think I am yet to come to terms with my loss. There are days when I wake up and try to imagine how it was when I had hearing in both my ears.” But nothing can stop him from making more music. When Akhu returns home, he has a lot of unfinished music to work on, and left unrecorded, he says, it haunts him. “I will make music till the end of time, or as long as I survive.”

Vaathi Coming, the second single from Vijay’s Master has been released. The song, which is a kuthu number, has been composed by Anirudh Ravichander and sung by the composer along with Gana Balachander, who has also written the lyrics. The duo also feature in the video of the song that has been released. [embedded content] […]

Should you watch Netflix’s ‘The Goop Lab’?

I’ve always told people that my mum was a bit of a hippie growing up. What I really mean is that she is what many in the New Age community call ‘a seeker’ — someone who is looking for answers to the big questions about life and the universe and, fundamentally, happiness and our purpose […]