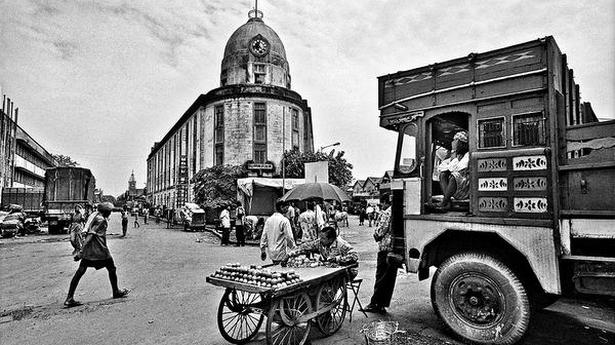 In 1999, with the encouragement of late historian Sharada Dwivedi, photographer Chirodeep Chaudhuri put together his debut show featuring 20-odd shots of clocks scattered around South Bombay. The passion project has continued for more than two decades, crowdsourced via email, text, Instagram, and Whatsapp. Chaudhuri has also come across clocks rather serendipitously: whether stuck in a traffic jam, overhearing conversations in public places, flipping through novels about the city, or dropping off a co-passenger in an Uber Pool. “Some of the stories are rather bizarre,” says the photographer and city chronicler. “I remember travelling in a cab with my student and coincidentally stopping outside the Anand Niwas building. Lost in conversation, she asked me how I usually find these clocks, and I told her, ‘You never know, you might look up and just find one’. Sure enough, there stood the clock at Anand Niwas!”

After a span of two decades years since his debut, Chaudhuri returns to clocks with an ongoing show at the Max Mueller Bhavan (part of the ‘Women In Design 2020+’ conference organised by the HECAR Foundation and Somaya and Kalappa Consultants). Seeing Time: Public Clocks of Bombay is birthed through obsessive observation, featuring 81 public clocks. “By now, I can say with surety that there must be only two-three existing clocks that I still haven’t found,” says Chaudhuri.

In his photographs, we see popular working timepieces at the Victoria Terminus booking counter, Crawford market, Mumbai Central Railway Station, and the David Sassoon Library, among unnoticed clocks dotting the edifices of the Christ church School at Clare road, Byculla, the Indian Sailors’ Home in Masjid Bunder, the sundial at Kamala Nehru park, and the eighteenth Portuguese sundial at Manor House, Bombay Castle.

While time barely stands still in this metropolis, Chaudhuri, looks past the city’s circadian time, and instead, documents it. The photographer’s documentation is as an allegory of how time means money, physically representing an era dependent on public edifices for time. “But I’m not interested in mushy nostalgia about a time long gone,” asserts the photographer. “For me, the larger story is about technology and its redundancy.”

Like public clocks of the eighteen and nineteen hundreds, that are often abandoned because of rusty gears, the difficulty in replacing broken parts, delicate mechanics, and daily/weekly need for winding. In fact, this is why the series is photographed only in daylight, since the clocks wouldn’t illuminate at night, merging in with the shadows. So who then, are the custodians of the dials that still move with the times? Chaudhuri documents them in a few stories on Instagram.

In a photograph posted in early January this year, the time chronicler features Mr. Rajkumar, an employee at the Western Railway’s Lower Parel workshop who is in charge of maintaining the ‘heritage ghadi’ on the premises. The 1889 vintage model is carefully oiled and wound by Rajkumar, and his colleague, Norbert D’Mello, as the former casually informs Chaudhuri how the clock loses three minutes every week. Many of the photographs in the show are labelled ‘clock working,’ or ‘clock missing,’ with the assumption that the unlabelled entities are either not working or unserviced. Intentionally or otherwise, Chaudhuri’s frames capture the contrasting days in various parts of the city, from North to South. How does a day in Vile Parle look in comparison to an afternoon in Sikanagar? The clocks are central protagonists in a much-larger story, conspicuous in their presence and even absence, characterised by empty spaces on walls. My eye is drawn to photograph the Indian Mercantile Building (Dadar), which dons the frame of a clock, now making way to cascading plants. Similarly, the circular ring of the clock at the Shanti Sadan Apartment (Sion) acts like a window, welcoming the trees that flank it.

As our conversation shifts from Chaudhuri’s existing photographs, to the next phase of his project, he shares stories of ancient Bombay archives that documented clocks on buildings that no longer exist. “For example, a friend, Rajan Jayakar, has a picture of the Khada Parsi that was originally placed in Nagpada, with the backdrop of a building embedded with a clock. The façade doesn’t exist any more,” says the curious photographer. Interestingly, these are the clocks that Chaudhuri is now in search of — seeking time that literally stands still.

‘Football is a game of deceit’

British filmmaker Asif Kapadia’s third in the trilogy of documentaries, Diego Maradona, on the Argentinian football legend Diego Maradona, premiered earlier this year at the Cannes Film Festival. In many ways it carries forward from his previous work — Amy (2015, on singer Amy Winehouse) and Senna (2010, on racing champion Ayrton Senna)—in showing the […]