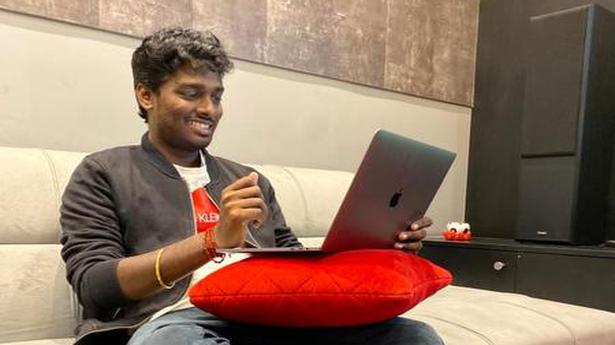 With Vijay’s Bigil all set to release tomorrow, there is huge hype and anticipation around the tightly-guarded plot and making of the film, that is touted to revolve around a girls’ football team and their coach, played by Vijay.

Very little information about the film has been revealed so far, with plenty of questions over how many characters Vijay plays in the film, what are Jackie Shroff and Nayanthara’s characters, and so on. Director Atlee, who hasn’t spoken about the project so far after the audio launch, took to Twitter on Thursday evening to field questions from fans on not only Bigil, but also what he thinks of Ajith, the rumours surrounding his Bollywood film with Shah Rukh Khan and of course: the Atlee-Vijay bond.

“The railway scene towards the interval is my favourite bit of the film,” said the director, while also revealing that before the making of Bigil, the character of Vetrimaaran (played by Vijay) in Mersal was his fondest, but now Rayyappan has overtaken it. “Even you guys will like Rayyappan the most among the characters.” he added. Atlee’s previous films Theri and Mersal have also had strong interval sequences.

He refused to divulge how many roles Vijay essays though, saying he “doesn’t know maths” when quizzed on if Rayyappan, Michael and Bigil were two or three characters. However, he hinted that Bigil has shades of a ‘gangster’ film, and that Nayanthara is the movie’s ‘angel’ and has an emotional and inspiring arc in the film. He also called Kathir (who stars in the film) a ‘rockstar’, and Jackie Shroff his ‘buddy’.

Another surprise was when Atlee revealed that there are two more ‘emotional songs’ in the film, apart from the ones released in the album by A.R. Rahman.

Social media is notorious for Ajith-Vijay or rather, Thala-Thalapathy fights, but when Atlee was questioned on what he thinks of Ajith, the filmmaker replied saying that he had “great respect for Ajith. My recent favourite films of his are Viswasam and Nerkonda Paarvai.”

He also expressed his desire to work with Dhanush, and again hinted at doing a Telugu film with Jr. NTR stating that the actor “calls me after every film and appreciates my work. I’m waiting for his call tomorrow after Bigil.”

There were words of praise for Lokesh Kanagaraj, Vijay’s next director in Thalapathy 64, whose film with Karthi, Kaithi, releases tomorrow as well.

On Vijay, Atlee said that he was a “true human being who gives love and no hatred,” and that he ahd learnt to ‘I.N’: ignore negativity, from him. He also picked the 2004 film Ghilli as his favourite Vijay film, outside his own.

Finally, addressing talk on directing Shah Rukh Khan in his next Hindi project, Atlee said, “I have a huge amount of love and respect for #SRK sir and he also loves my work. Soon, hopefully, we will do something about it.”

Rounding up a not insignificant bouquet of three top-billed stage productions (out of five) based fully or partially on works by women writers at this year’s Prithvi Theatre Festival, is a new play written and directed by the prolific Faezeh Jalali. It comes at the heels of Annie Zaidi’s award-winning Untitled 1, directed by Danish […]

In 1999, with the encouragement of late historian Sharada Dwivedi, photographer Chirodeep Chaudhuri put together his debut show featuring 20-odd shots of clocks scattered around South Bombay. The passion project has continued for more than two decades, crowdsourced via email, text, Instagram, and Whatsapp. Chaudhuri has also come across clocks rather serendipitously: whether stuck in […]

From the first Dilwale Dulhania Le Jaayenge inspired scene to the last, the “Ja Simran, jee le apni zindagi” dialogue uttered by an equally stern Bauji (patriarch) and an Aashiqui-inspired image of young love thrown in the middle. It’s evident what Hitesh Kewalya is doing with what could, perhaps, be the first unabashed same-sex love […]