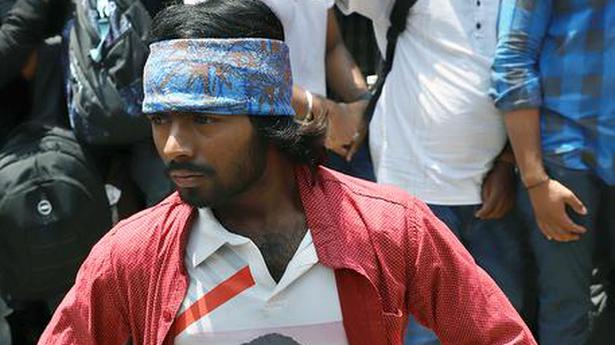 A kilometre-long queue, of mostly bearded, well-built youngsters, waited in front of a private hotel on Malleswaram, 8th Main, as curious bystanders looked on.

It was a busy Friday again for the Kannada blockbuster K.G.F.: Chapter 1 (KGF), this time for its yet-to-be-made sequel.

Awed by the massive success of the first chapter, aspirants for supporting roles in the ambitious sequel of the film, starring Yash and directed by Prashanth Neel, made it for the auditions. Some of them even made the trip from outside Karnataka.

Karthik Gowda, creative executive producer of K.G.F.: Chapter 1, told The Hindu: “Following an online call for auditions, over 4,000 youths from various parts of the country queued up in front of the hotel. We needed only five to 10 of them for various roles.”

Abu Dinal, who had come all the way from Kochi, said he got to know about the auditions through different social media platforms.

A quintessential characteristic of most of the characters in the film, who went on to become instantly recognisable, was their long hair and beards.

The look donned by most of the characters in K.G.F.: Chapter 1, including Yash, went on to become an instant hit. On Friday, as the queue swelled, several aspirants were called out of the line and asked to leave because they did not “fit the character”. Some were told that they were not “hefty enough” for the role, and some others because they did not have a beard. Those who were waiting eagerly from 5 a.m. were left disappointed.

“They initially pulled me out of line saying I did not fit the criteria. They only let in those who sported a beard,” said Tej Kumar from Thiruvananthapuram. Those who wanted to audition could either perform something they had prepared on their own or deliver the dialogues given to them.

“Though thousands registered online, some came just on the feeling that they would fit into the character and try their luck,” said a member of the audition team.

The enthusiasm was triggered after the success of multilingual K.G.F.: Chapter 1, which was touted as the biggest film — budget-wise — in the history of Kannada cinema. The film catapulted Yash to superstardom not only in Karnataka, but also elsewhere.

“The sequel, which is set to release in 2020, triggered curiosity as it would provide answers to all the apprehensions in the first part of the film. The shooting of the film will commence in the first week of May,” added Mr. Gowda.

(With inputs from Meghana Vasanth)

The Spirit Remains Unlocked is an online project launched on March 25th, the first day of the three week lockdown, by Gurugram-based art consultant and curator Lubna Sen. The commercial project initially had just 10 artists, but today has 30 from across the country. “Art has always been a cultural documentation of the time that […]

Kabir’s doha Ghat Ghat Mein Panchi in the melodious voice of Hindustani musician Kishori Amonkar reverberates through the room. I close my eyes, a warm kurta that I’d been ironing still in my hands, and let the music flow over me. Just then my phone rings. It’s my daughter upset about a colleague’s immature behaviour […]

In the works of several of the artists showing at Gallery Threshold, in a quiet residential neighbourhood in South Delhi, the skin is the keeper of memories. It could be the surface on which the scripts from our lives are preserved, or the sheath behind which they try to stay hidden. The group exhibition, Skin: […]