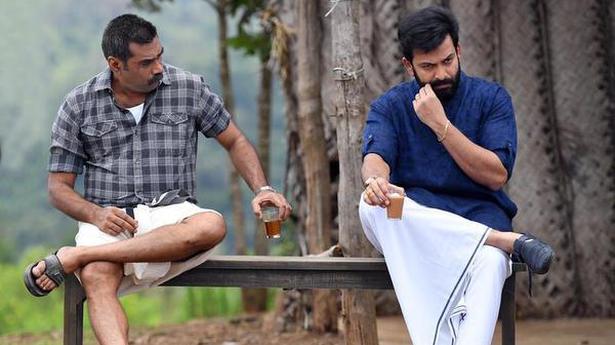 A stray incident snowballing into a feud and nearly three hours of riveting reel time devoid of any customary gimmicks.

It is a dialogue-driven narrative, as much verbal as visual, but without over-punctuation or the burden of forced hilarity. The film also comes with a highly textured screenplay, creating an immaculate balance between lightness and intensity.

Ayyappanum Koshiyum has Biju Menon and Prithviraj playing its sparring heroes, two flawed men who extract an instant nod of approval from the audience.

They meet on a forest road, one fighting tipsiness inside a car and the other on duty checking vehicles in Attappady, an alcohol-free zone. Koshy, a 38-year-old retired havildar, is taken into custody with his stock of alcohol. He brags about his ex-military status, challenges the policemen and runs amok till Ayyappan intervenes. He is slapped, dragged to the police station and unceremoniously dispatched to jail.

USP of the film

The day Koshy comes out of the prison the war is declared and he finds a formidable adversary in SI Ayyappan Nair, who has only a couple of years left for retirement. The USP of the film is the way Sachy builds an engaging and nearly perfect entertainer, right from the lightweight conflict in the beginning. It is not all about the nauseous flare-up of machismo as the script brings in awkward home truths and urgent arguments. Though both men come with shades of grey, the film also raises some pertinent questions about privilege and fairness.

It touches upon toxic sense of entitlement and modes of resilience, it talks about people who revolt when pushed back to their limits.

Though the dialogues mostly set the pace of the film, they are more or less organic and commonplace, not designer one-liners penned for a special purpose.

Biju Menon brings in a kind of freshness to the ‘audacious underdog’ and ‘beast-unleashed’ themes while Prithviraj is equally impressive as the boozing, carefree brat.

Ranjith plays his father Kurian, a man who exudes arrogance from every cell of his body, an epitome of disgusting patriarchal pride, something he always celebrated in his movies as a director and scenarist.

Gowri Nanda gives a neat performance as the Adivasi wife and all the supporting cast leave an impression.

The music is another vital aspect, which adds to the tempo of the film and cinematography by Sudeep Elamon maintains the mood without any disconcerting fluctuations.

And together they make Ayyappanum Koshiyum a gripping affair, rugged and confident.

Hollywood icon Al Pacino turns into a Nazi hunter in his web series debut, Hunters. The highly anticipated series will see him go on a murderous rampage. The trailer of the conspiracy thriller, produced by the award-winning Jordan Peele, was released on Friday night and has been garnering quite a buzz. The series follows a […]

A man with wings like an angel, crouches to chase after a snake. Set against dark shades of blue, this picture is grim. A fish bone, and few severed heads watch him. In another painting, the fish bone is hung against an earthy background sporting elements that could represent myriad meanings. The odd clock stands […]

Cosplay star AK Wirru on his first costume, whether cosplaying is an art form and more

This year, the Bengaluru Comic Con played host to one of the best cosplayers in the world. Quite literally as Sydney-based AK Wirru with his partner K, representing Australia, were named Grand Champions at the World Cosplay Summit 2019 in August. “It is kind of like the Olympics for cosplayers. Very intense and rewarding and […]