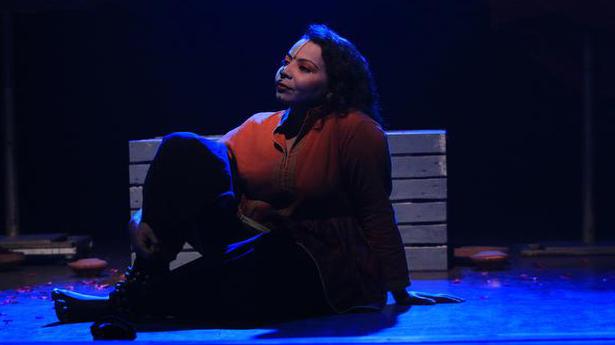 Something about everyday conversations, especially with unfamiliar people, nagged Sunandha Raghunathan when she was in London two years ago, studying for a master’s degree in Text and Performance at Birkbeck College and the Royal Academy of Dramatic Art. Many of them would ask her: where she came from, what she spoke, what she believed in. Questions of nationality, culture and faith. But, for Sundandha, who has been involved in theatre for over a decade, ultimately, it was the question of one thing: identity.

Scene two: Sunandha was back home in Chennai for the 2017 Christmas vacation. She was trying to come up with an idea for her final project at Birkbeck when she heard, in a radio channel, a spoof of astrology shows.

“They would be like, for example, ‘Aquarius: You will keep waiting for weekends but when they arrive, you will have nothing to do.’ They were funny. I wanted to do something like this for my project. But this seemed like stand-up comedy. And, stand-up is not theatre,” she says.

If not a stand-up comic, she decided to be a jester on stage. She harked back to her homeland — Tamil Nadu — specifically, its rural theatre form, kattai koothu, which involves a kattiakaaran/kattiakaari (male/female jester).

With the tone and form of the play in place, Sunandha needed a story to complete the jigsaw. She drew from her life, the questions she encountered in London, and from Mahabharata, the story of Aravan’s (son of Arjun) sacrifice.

Explaining how these aspects coalesced, Sunandha says, “I found that everything I identified with and as, I was also in contention with and opposition to. For example, I would identify myself as Tamil but I was continuing to make plays chiefly in English. So, I thought I will make a play about identity. But it cannot just be about me; else, it will look like I am making a video to put in my matrimonial profile. So, I was looking for something that juxtaposed with my own identity.”

She found a great parallel in Aravan, the tutelary deity of transgenders in south India. “Look at him. He is male but is identified as the god of the transgender community.”

“So, when I had to develop a show for my final project, it was always going to be Bad Hindu because I wanted to dissect the constructed nature of identity.”

Sunandha says her classmates and teachers were awed by her 40-minute play (in English but featuring Tamil songs). So were the audience at Hamstead Theatre, who watched a 60-minute version of Bad Hindu.

“They were all overwhelmed. They were like Game of Thrones is nothing. Most of the questions I got there after the screening was about the context and story.”

The audience’s response, however positive, was different when she performed in Chennai. “Maybe because most of them knew Mahabharata, they asked me more about the form, structure of the play and things like that.”

Sunandha has hitherto performed the play six times. “Each time, I try and share more about myself, try and be more honest of who I am.”

A seventh re-enactment beckons at Bengaluru for Sunandha.

Ashutosh Gowariker’s magnum opus Panipat is one of the most anticipated films of the year, as the director continues to add a stellar list of names to the cast of the historical drama. The latest addition is legendary actress Zeenat Aman, who will be seen in a special appearance, essaying the character of Sakina Begum. […]

The Hindu celebrates the talent of youngsters this Margazhi, in a web series. In the December Music Season, a young crop of artistes will get a chance to showcase their talent online. The Hindu brings you a month-long online series of recordings by these up-and-coming artistes. Carnatic vocalist Sudarshan Mohan has been learning music for […]

A space for artistic expression

In today’s fast-paced world there seems to be a dearth of places where one can foster artistic expression. To address this lack, two friends — Padmalatha Ravi and Deepika Mogilishetty — started a creative community space called kaTTe. In Kannada, kaTTe means a platform built around trees where people, in the olden days, would meet, […]