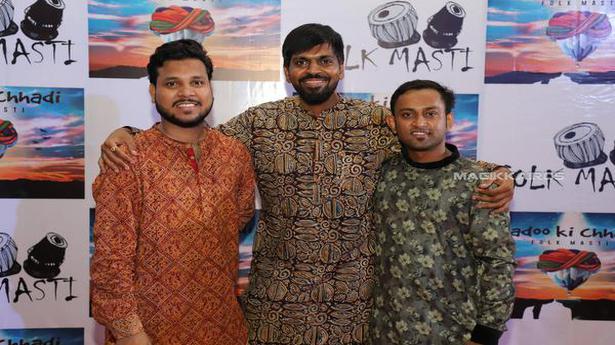 At their recently hosted set of shows in the city, Mumbai folk rock band Folk Masti made the most of a small room, like they have always done. Formed in 2014, the trio have performed across India and visited Bengaluru for the second time, performing a couple of intimate shows via community organizers Motojojo.

Founder, vocalist and guitarist Vipul Panchal says, “Both were amazing gigs. We love the audience here, because people listen to your words and the music parts, they enjoy each beat. Overall, I can say there is an educated audience here for indie music.” It was in April last year that Folk Masti were last in the city, performing at the erstwhile club venue Bflat. Panchal recalls there were around 45 people, which was heartening to see for their first time. He adds, “Unfortunately due to licensing issues, lots of venue are shut. The government should think on it so that our art can survive, as Bangalore has amazing independent artists and bands.”

Whilst in Bengaluru, Folk Masti also visited the region’s favourite troubadour Raghu Dixit and gave him a copy of their debut album Jadoo Ki Chhadi, which was released last month. Panchal recounts how Dixit joked about the band’s efforts to crowdfund the album, while he was toiling away and investing his own money. “He is so down to earth as an artist, he is one of our favourites. Appreciation coming from him is cannot be expressed in words,” Panchal says.

The album brings together playful country, pop, acoustic folk and rock across languages including Hindi, Gujarati and a bit of English. Live staples such as ‘Rundunana Re’ and ‘Life Is Crazy’ are likely to bring smiles to any listener’s face, heaping up feel-good melodies and simple, sing-along lyrics about life, modernity, devotion and the importance of music. The instrumentation ranges from Puneri dhol beats to ukulele and banjo, plus the regular rock offering of guitars along with a few electronic flourishes. Panchal says, “You can hear the vibe of Latin, folk, country, rock, fusion and pop in the album.”

Jadoo Ki Chhadi was in fact partly funded via Crowdera, on which they raised over ₹1.7 lakh of their intended goal of ₹ 4.5 lakh. It wasn’t entirely fulfilled. Panchal says it was a difficult prospect and that meant the band “had to suffer a lot” but he is still happy that crowdfunding gave them fans who are now invested in the band monetarily.

“Some people asked why we aren’t taking a loan from the bank and meeting our costs for the project. We could get the loan but we wouldn’t get those 104 people’s support. They have contributed to us so now they are part of our band’s family. They would be interested in what the band is doing and new music coming up,” Panchal explains.

When auteur Shaji N Karun gave actor Esther Anil the script of his film, Olu, to read, she was in two minds. While her parents were ecstatic about the opportunity to work with a filmmaker like Shaji, Esther wondered if she would able to step into the shoes of Maya, the lead character in Olu. […]

‘Saaho’ team to launch a game based on the film

The multilingual film Saaho, starring Prabhas and Shraddha Kapoor, is scheduled to release on August 30. Taking a cue from the Baahubali team that kept the frenzy around its film alive through games and comics, the makers of Saaho have also worked on a game. According to a statement from the unit, ‘Saaho – The […]

‘The Morning Show’ review: a thoughtfully-guided narrative around #MeToo

The opening scene of The Morning Show’s pilot episode sees a 3:30 am wake-up call on everyone’s iPhones — it’s an Apple original, of course — which shakes up the world of all-American news segment of the same name ‘The Morning Show’. “Someone better be dead,” says a groggy Mitch Kessler (Steve Carell) as he […]