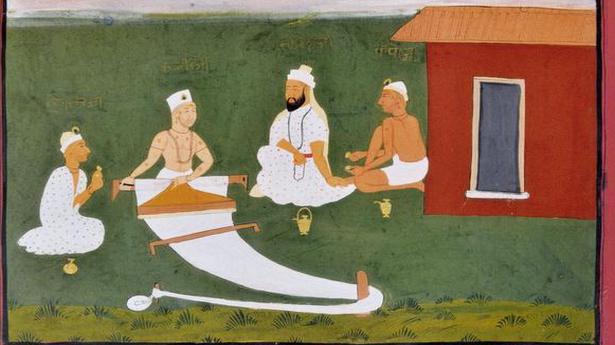 Kabir’s doha Ghat Ghat Mein Panchi in the melodious voice of Hindustani musician Kishori Amonkar reverberates through the room. I close my eyes, a warm kurta that I’d been ironing still in my hands, and let the music flow over me. Just then my phone rings. It’s my daughter upset about a colleague’s immature behaviour at work. “She undermines my efforts constantly,” she says. “I can’t take it any more. I’m going to quit!” she wails.

Thanks to Kabir, I’m able to tell her, “Listen to your inner voice. What do you think you should do?” There’s a momentary silence on the phone line, and then she says, “That’s actually good advice, Amma.” A week later, she does quit her job, and even now, every time we talk, she alludes to how glad she is that she listened to her inner voice.

That’s not the only call I get that day. As I try to get back to my ironing, a special ringtone informs me that my 80-year-old mother who lives in Chennai is calling me. “I need to go for more tests” she whispers. She’s just back from a visit to the doctor and sounds rattled. I bite my tongue so as to not dismiss her fears, and listen to her. I wouldn’t be stretching the truth when I say that most of my family are hypochondriacs. “I’m dreading whatever the doctor may recommend,” my mother continues. “What if he insists on an invasive procedure?”

When she begins to list other what-if scenarios I set out to cautiously allay her fears. As the Kannada poet and mystic Basavanna described the importance of good speech, Nudithare mutthina haaradhan thirabeku, Words should be like pearls strung on a thread.”

Fortunately, I sense that my words are reassuring to my mother. By the time I hang up, she’s calm and ready for her next appointment. I mutter a thanks to Basavanna and wonder if he’d have figured his larger-than-life influence on mother-daughter conversations in the 21st century.

Advice down the ages

With ageing parents, a spouse seeking a second career, and children entering the workforce, I am pulled in many directions. However, I recognise that the travails I’ve faced are by no means unique. Sometimes others have it a whole lot worse. Living in a high-context culture like India, if there is anything that is more frequent than the problems we face every day, it is the number of people who are ready to give advice. Family, friends, neighbours and strangers on the street are quick to lend gyaan, be it on the most mundane or the most complex problems.

Fortunately, many centuries earlier, the Bhakti mystics faced and addressed, or at the very least, offered coping mechanisms for many of life’s challenges. The Bhakti movement spanned a period from the sixth century all the way to the 18th century. The Bhakti mystics, a group as varied in gender, geography and social and economic backgrounds as India itself, searched for answers throughout their lives. Even as they sought a personal and simple relationship with god, they addressed everyday issues that people faced as much as they did spiritual matters. From Andal, Akka Mahadevi and Basavanna through Kabir, Meera, Surdas and Tulsidas, they challenged conventional wisdom, questioning not just religious but social mores as well.

Messages in the music

The movement gave rise to devotional poetry and hymns that addressed not only existential questions but real-world problems. Fortunately, they did all of this in the regional languages, composing in Braj Bhasha, Hindustani, Kannada, Maithili and Tamil, among others, making their message available easily to everyone.

When I first learned Andal’s Thiruppavai and Meera’s bhajans, it was as a musician, and I approached it merely as a musical exercise. However, singing with bhaavam requires understanding both the meaning and context of a work. But dealing with the daily challenges of a householder is what got me to truly appreciate the message of the mystics.

Beyond the personal, as my socially-conscious daughters and I encounter a variety of challenges, from the trivial to the serious, I find myself leaning ever more on the wisdom of the mystics. I share with them the story of Marathi mystic Soyarabai who sang Avagha Rang Ek Zaala to remind us that doing away with the differences among us is the way to avoid conflict.

It is easy in this era of #MeToo to be discouraged that we continue to fight many of the battles that mystics such as Akka Mahadevi in Karnataka, Karaikkal Ammaiyar in Tamil Nadu, and Soyarabai from Maharashtra did centuries earlier. Yet, it is in their evergreen compositions that I find inspiration every day. As you might too.

The writer is a Carnatic musician based out of Columbus and Bengaluru.

Biswa Kalyan Rath, 29, is many things. If you follow India’s stand-up comedy scene, you’ll recognise him from his appearances in Amazon Prime shows like Comicstaan, and as the co-host of the now-defunct YouTube series, Pretentious Movie Reviews (where he and Kanan Gill use a heavy-handed dose of sarcasm to comment about Bollywood hits). He […]

Man for all seasons

Ramesh Aravind captured the hearts of people with his hit talk show Weekend with Ramesh when it first aired in August 2014. Now, he is back again with Season 4. This season the show will feature Raghavendra Rajkumar, Sri Murali and Prema among others. Ramesh, who dons many hats — director, actor, television host, motivational […]

‘No Fathers In Kashmir’ movie review: In search of missing fathers

The past few weeks have seen two films pivoting on the missing men and half widows of Kashmir. Hamid, where the issue gets seen through the eye view of an eight-year-old child, is moving in its simplicity and humaneness. No Fathers In Kashmir looks at it through two teenagers-a British Kashmiri girl and a local […]