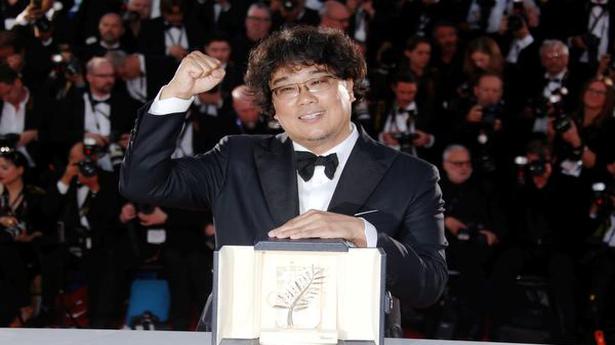 South Korean director Bong Joon Ho’s Parasite, an audaciously original take on the sharp rich-poor divide and its shocking repercussions in the city of Seoul, bagged the Palme d’Or at the 72nd Cannes Film Festival on Saturday evening, while three of the four films by women directors in this year’s Competition also ended up among the awards.

Bong Joon Ho is the second Asian director in succession to win the Palme d’Or, after Japan’s Hirokazu Kore-eda, who won last year for the film Shoplifters.

The jury headed by Mexican director Alejandro Gonzalez Inarritu awarded the Grand Prix, the festival’s runners-up prize, to first-time director Mati Diop’s Atlantique, an individualistic take on life’s struggles in Senegal, Atlantique. The award was presented to her by Hollywood star Sylvester Stallone.

The Jury Prize was shared by two films — French-Malian Ladj Ly’s Les Miserables, inspired by the 2005 riots in a Paris neighbourhood, and the Brazilian entry Bacurau, directed by Kleber Mendonce Filho and Juliano Dornelles.

Palestinian director Elia Suleiman’s It Must Be Heaven won a special mention from Inarritu’s jury. Portrait of a Lady on Fire, directed by Celine Sciamma and one of the best reveiewed films in Cannes this year, a Cannes Competition first-timer, fetched her the best screenplay award.

Antonio Banderas drew huge applause on being named the best actor for the role of filmmaker in Pedro Almodovar’s self-reflexive Pain and Glory. He received the trophy from Chinese actress Zhang Ziyi.

Our Mothers, a film by Guatemalan director Cesar Diaz, won the Camera d’Or for the best debut film in Cannes this year. The film was part of the parallel Critics’ Week.

The Un Certain Regard jury was headed by Lebanese director Nadine Labaki, who won the Jury Prize last year for Capharnaum in the festival’s main Competition.

In his acceptance speech, Ainouz drew attention to the current turmoil in his home country. Brazil is going through something very, very hard and it has got to do with intolerance, he said.

The Jury Prize in the sidebar was won by French-born Spanish filmmaker Oliver Laxe’s Fire Will Come, which is a powerful and slow-burning look at rural life faced with extinction in the Galician mountains.

The festival’s FIPRESCI jury picked Elia Suleiman’s It Must be Heaven, a characteristically personal, absurdist take on the state of being a man without a country to call his own, for its International Critics’ Prize for a film from the Competition section. For Un Certain Regard, it gave the prize to new Russian sensation Kantemir Balagov’s Beanpole for “its highly aesthetic use of the medium of cinema and its unique story of post-war trauma”.

FIPRESCI also gave a prize to The Lighthouse, directed by Robert Eggers. The film, which played in Directors’ Fortnight, was described as a “a brutal work of art, all shot in beautiful black and white cinematography and fuelled by a soundscape that echoes like a foghorn”.

About seven years ago, to inhabit the culture, consciousness and chaos of Carnatic music at its epicentre — Chennai — G Ravikiran, a Carnatic musician from Bengaluru, and currently a senior manager at Cisco, moved lock, stock and barrel, with his family — wife and two young children — to Chennai. Although the move came, […]

Akbar Padamsee: The Sanskrit scholar among the Progressives

Akbar Padamsee’s passing away invited an elegiac silence in the contemporary art world. India has lost the Sanskrit scholar among the Progressives. Padamsee, as an artist, led us into a space of refined aesthetic, balancing between the hieratic and the human. In the best of two centuries, Padamsee nourished himself as the fountainhead of regional […]

A friendship that lasts 50 years… Despite its saccharine title, Love Letters, the play by AR Gurney makes you question what love really entails. The internationally acclaimed stage hit is coming to The Hindu Theatre Fest in Coimbatore to tell the poignant story about Andy Ladd III, a serious, down-to-earth attorney and Melissa Gardner, a […]