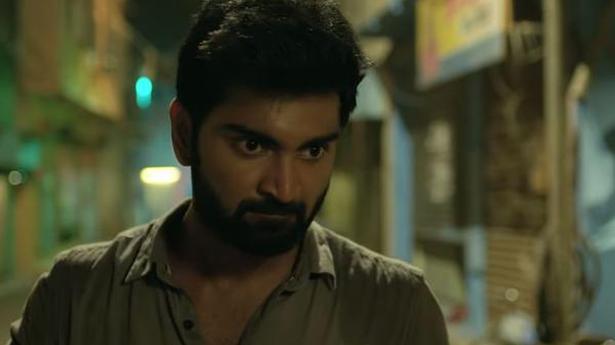 The first 10 minutes of Boomerang surprisingly hits you hard. Shiva (Atharvaa) has met with a fire accident and his face is burnt. He looks like… well, remember Vikram in I? But there’s medical help at hand, and a doctor announces that he could start afresh if he underwent a face transformation surgery. He’d get a new face then, she says. But that needs a donor. And the same hospital has a person on the verge of dying and his mother is willing to donate his face.

With his ‘new’ face, Shiva has to deal with all the battles that the person whose face he now possesses. Boomerang is a modern-day Pudhiya Mugham(remember plastic surgery?), so we think.

But director Kannan has different ideas. The minute the film gets into friendship zone (Sathish has a few clever lines but is plain annoying) and cutesy-romance zone (Megha Akash as a short filmmaker seems bereft of expressions) it takes a nosedive. Halfway through the film, the director disbands the great face transplant idea – which could have been exploited and fleshed out into a better commercial film – and veers into a commentary against corporate companies and the benefits of youngsters taking to farming.

The intentions are honourable, but the angst and frustration over the system (Aayutha Ezhuthu style…after all, the director is a former assistant of Mani Ratnam) doesn’t touch an emotional chord like it wants to. A clichéd villain arrives in the end, but by then, the film has already backfired.

This kind of a subject needs a bigger star – I kept imagining the possibilities of Vijay, Ajith or Suriya in such a storyline. Atharvaa is earnest, but the distractions in what could have been a straight solid storyline are just too many in Boomerang.

One of the most potent feelings cinema can create is that of nostalgia. Gitanjali Rao’s Bombay Rose is awash with an unspoken yearning for what Mumbai once was and the Bombay that it can still be; the genteel heart behind the visible aggression. It all gets amalgamated in the persona of Shirley D’Souza, a dancer […]

Writer and director Raaj Shandilya is the new name in humour business. He has written dialogues for “Jabariya Jodi”, and is directing Ayushmann Khurrana’s upcoming film “Dream Girl”. “The film’s idea came from my co-writer Nirman in 2013 and he wanted me to write it. In 2015, we completed the story of a man who […]

Game of Thrones star Sophie Turner has taken a swipe at actor Evangeline Lilly who had said that she won’t be going into self-quarantine amid coronavirus outbreak, as she values freedom over everything else. The Ant-Man and the Wasp star’s comments on social distancing didn’t go down well with Turner, who urged her fans to […]