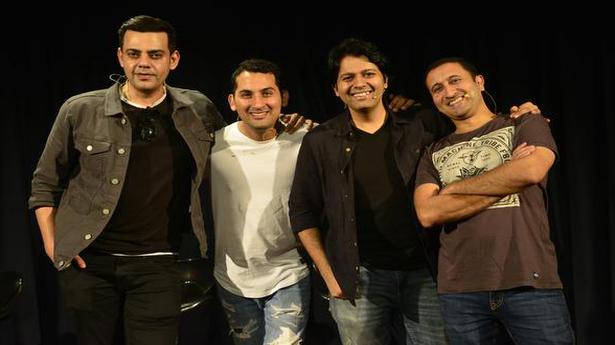 English record producer Brian Eno, of the difference between live and recorded music, says, “Musicians are there in front of you, and the spectators sense their tension, which is not the case when you’re listening to a record.”

The same can be said of a comic’s show on stage and its recorded video. In the former, you get to participate. The latter, you merely watch and hear. The surging excitement to yell a witty remark, the mild fear of being the butt of a joke and the exhilaration while joining a collective applause will be amiss..

The superiority of a live performance was proven again during The Improv’s improvisational comedy on Friday at the Alliance Française de Bangalore.

Started by comedian Saad Khan in 2012, The Improv is a deviation from the regular stand-up comedy. As its name suggests, the performance is unscripted and unrehearsed. Usually, the audience suggest a situation, topic or location to the performers.

Before Saad and an impressive trio of comics — Cyrus Sahukar, Danish Sait and Darius Sunawala — drew delirious howls of cheer and a spirited ovation from the audience, The Metroplus put their ability to come up with an instant funny story to test. Before the show, we asked them their most memorable traffic jams.

My favourite traffic jam… Well, actually, can’t call it ‘favourite’ because, well, it is a traffic jam. But I’ll still call it that because that’s when I first saw how beautiful Bengaluru is. There is a particularly horrible road that’s been horrible since it was made. It’s between Hosmat and ASC Centre. There’s always been [heavy] traffic on that road. But this is about one particular evening, which is at least a decade ago. It was raining and we were stuck there for a really long time. There was a car, which was right beside me in the traffic jam. The person was kind enough to roll his windows down and say ‘Do you want to come and sit inside?’ And, yeah, I parked my bike and went and sat with him for about 10 minutes. When the vehicles started moving, he said, “I think you should go now.” Thank you, Bengaluru traffic. You have bought some pleasant memories.

I was coming all the way from Whitefield to Sanjay Nagar, which is like going from Chennai to Bangalore. It took me at least three hours to get back home. The entire drive, weird things happened. Obviously, there were potholes and everything. But the thing that’s stuck in my memory was… I was driving and stopped at the traffic lights. Two people on a bike dashed into rear-view mirror. It broke. When I looked at them, they were glaring at me, asking, “What? What are you staring at?” And, a kilometre away from home, one of my back tyres got punctured. In the end, I just left my car there and walked home. So yeah, I love Bangalore.

In 2005, there was a huge flood in Mumbai. Everything was underwater. My car was almost floating. I didn’t know what to do. In that crazy moment, when you expect people to go at each other, I saw helpfulness. There used to be a Chinese food stall outside my workplace. So the guy running it would always give less chilli chicken, fleece some money here and there. But during the flood, he was giving free food to everyone. People were helping each other out. I saw the city come together. You see these apocalyptic movies where people are going through trauma and all that. But I saw people play water football and guys diving off cars. So, it was interesting to see how people react to an event of calamity. Some people became more fun, some more helpful… But the day the flood ended, the Chinese food guy went back to cheating people and everyone went back to being grumpy.

Bahubali actor Prabhas in self-quarantine after returning from abroad

South superstar Prabhas has announced that he is in self-quarantine in the wake of the COVID-19 pandemic. In a short statement posted on Instagram, the “Baahubali” actor said he recently returned from Georgia after completing a film’s shoot and therefore decided to keep himself insolation.   “On safely returning from my shoot abroad, in light […]

Dhanush praised me for the climax scene, says Ken Karunas on ‘Asuran’

When Ken Karunas speaks, one can see the innocence of boyhood in him — quite similar to his character, Chidambaram, in Asuran. Ken has been fielding calls and messages from industry folks and media persons. “Aiyoo, naal fulla interviews kuduthutu iruken anna,” he says over phone. Acting is not new to Ken. As a child […]