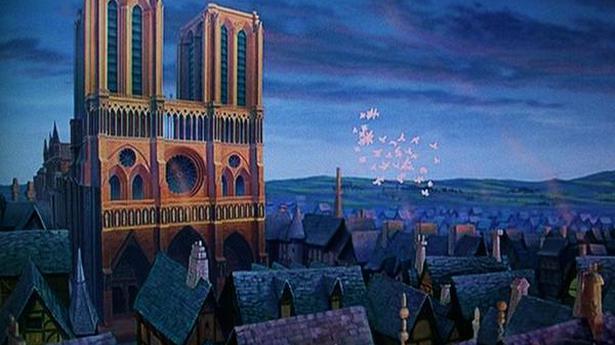 As I sat down to write this column, my various devices went berserk and social media began broadcasting heartbreaking live images of the Notre-Dame de Paris Cathedral burning, culminating in the spire and roof collapsing. My original intention was to write about something else, but my immediate thoughts were to write something about the representation of the cathedral on film. I nearly changed my mind, given that Twitterati were already on the case, but I decided to persist on the grounds that in the scant few hours from the horrific incident to when this column will be published, fickle public memory would have moved on to the next tragedy, meme or political jibe.

The obvious starting point would be the numerous versions of Victor Hugo’s celebrated 1831 novel Notre-Dame de Paris (The Hunchback of Notre-Dame in English) that details the tragic relationship between the cathedral bellringer Quasimodo and the gypsy Esmeralda. From the 1905 French silent short Esmeralda through to the 1996 animated Disney film The Hunchback of Notre-Dame and its straight-to-video 2002 sequel, the world has been fascinated by the subject, and has, across the years, attracted a galaxy of talent. A 1923 version starred Patsy Ruth Miller as Esmeralda and Lon Chaney as Quasimodo, while a 1939 adaptation starred Maureen O’Hara and Charles Laughton and a 1956 version, Gina Lollobrigida and Anthony Quinn.

When the BBC concluded their coverage of the fire with an extract from the Hugo novel read by the actor Tom Hollander, the composer Howard Goodall (Mr Bean, Johnny English) pointed out: “The book’s title is Notre Dame de Paris. The title you have used is from a film adaptation. Anyone who has actually read Hugo’s book will know that the cathedral, not a poor, persecuted bellringer with scoliosis, is the main character.”

While Notre-Dame was still burning, Twitter was already ablaze with Julie Delpy’s seemingly prescient remark from Richard Linklater’s Before Sunset (2004) where she says that Notre-Dame would be gone one day. In the film, that was preceded by a story recounted by Ethan Hawke’s character where he recalls a German soldier in charge of blowing up the cathedral during the Nazi retreat from Paris, who couldn’t bring himself to do the deed.

In any event, it is unlikely that Notre-Dame will be gone any time soon. As we speak hundreds of millions of Euros are being committed to rebuild the iconic structure. For a heartening example, the French only have to look across the channel at St. Paul’s Cathedral in London that was ravaged by fire, rebuilt numerous times, damaged during the Blitz, restored again, and renovated extensively less than a decade ago. Notre-Dame herself has survived various ravages over the years and the bells will soon ring out again and again.

Hugs and tears punctuated the taping of the last episode of The Big Bang Theory, a bitter-sweet moment for its stars, crew and audience alike. There were plenty of punchlines as well, as the true-to-form hit comedy about scientists and those who love them wrapped the two-part, hour-long finale that will air in mid-May on […]

Music and the city

On the heels of World Music Day (June 21), Hyderabad’s cultural venues are all out to celebrate the spirit of the occasion on Sunday, June 23. Fête de la Musique 2019 (World Music Day Celebrations 2019), will be spread across 14 venues and feature more than 200 musicians. Alliance Francaise has been celebrating the day […]

My parents would take me to watch movies when I was quite young; though I don’t really remember it. However, my earliest memory of watching a movie was of Mani Ratnam’s Anjali. I think I was a toddler then; but I went on to watch the movie several times later on and grew to appreciate […]