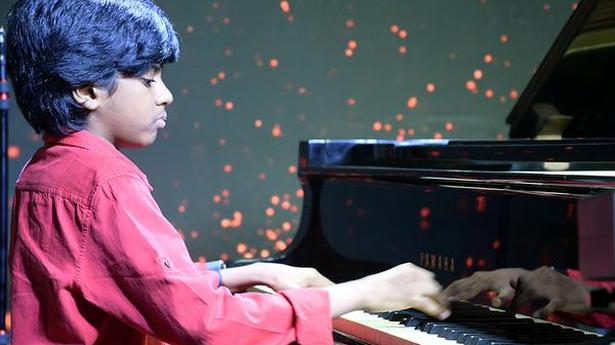 As his fingers flew over the keys, it became clear that Lydian Nadhaswaram, the 13-year-old child prodigy from Chennai, was the favourite to win ‘The World’s Best’ global talent contest. On Thursday Lydian was declared the winner, taking home $1 million in prize money.

The Chennai youngster, who spent four years at maestro A.R. Rahman’s KM Music Conservatory and is now tutored by his father Varshan Satish, stunned the judges at the contest by playing 280 beats per minute. He then increased his speed to 325 beats per minute.

“This is genuinely one of the best things I’ve ever seen live,” tweeted James Corden, host of the show.

Lydian also featured on the Ellen DeGeneres show last week after his appearance on the ‘The World’s Best’ contest.

The teenager, who is home schooled, told The Hindu that he spends on an average of six hours a day practising music under the guidance of his father Varshan Satish, a music director.

“I listen to music on YouTube and spend time going through music software. Along with my sister, I experiment a lot and we compose our own music,” said Lydian. The prodigy can play blindfolded, handle two pianos simultaneously, apart from being adept at playing the guitar and mridangam, his mother Jhansi said with legitimate pride.

Currently, he is investing time on the technical side learning skills such as mixing, sound systems.

The lad does not watch much television, but he is a regular on YouTube. “I recently picked up a movie from YouTube, then muted the sound and created my own audio. It was fun,” he said. Citing an example, he said he had tried this experiment with the animation Storks.

His performance has earned him an invite to the Jazz Foundation of America’s annual gala “A Great Night in Harlem” at the Apollo Theatre in New York on April 4.

Lydian says he wants to compose music for Hollywood. “I want to work for an animation film,” he said, adding that he also wants to play the piano on the moon at some point.

Lydian’s father, Varshan, said: “Last year, Micheal Novogratz sent Lydian a Steinway grand piano. Now he has invited him to perform at the concert with some musicians.”

His mother Jhansi proudly said that he also plays the guitar, mridangam among other instruments.

On Thursday afternoon, Oscar winner A R Rahman went to Lydian’s house in Saligramam (Chennai) and appreciated him. Lydian has spent four-years training on a full-scholarship at AR Rahman’s KM Music Conservatory under Surojeet Chatterji in the Russian Piano School.

‘You find home in bits and pieces’

Actor and writer, Dhruv Sehgal resents the ‘cute’ quotient associated with Little Things, his Netflix show about a millennial live-in couple, Dhruv and Kavya (Mithilia Palkar) navigating the contours of work, relationships and existence in Mumbai. “The first season was much more than ‘adorbs’. The treatment was light but it was also about freedom and […]