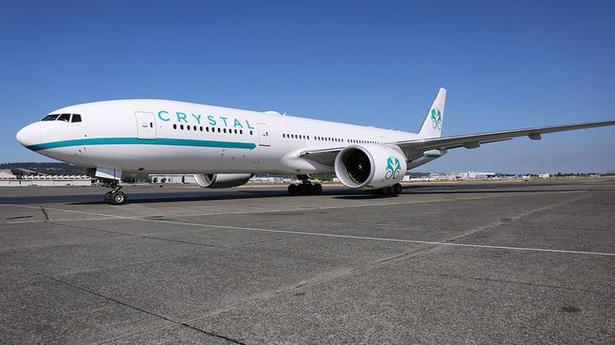 When Flight CS772 flew into Meenambakkam on Friday, September 13, 2019, shortly before 1 p.m., it scarcely created a ripple. But once the aircraft, Crystal Skye, was parked near a bay near the secondary runway with all the bustle of the ground handling agency concerned, there was realisation that this was a special flight.

The Boeing 777LR had flown in from Copenhagen to Mumbai on September 12 before continuing to Chennai. As aircraft go, the jet has been called the “most luxuriously appointed aircraft in the private aircraft industry”. The cabin, with 88 ultra plush and customised seats, is the byword in luxury travel, replicating the cruise ship experience in the air.

The few who can afford to charter it can expect customised linen, global Wi-Fi, inflight entertainment options of a comprehensive film and audio bank that includes live television programming and live flight deck-to-airport ground control listening. Inflight services that have been rated six-star, include steam irons and lens cleaners.

The dining experience features Michelin-inspired cuisine along with the services of an inflight chef, a sommelier and mixologist. The galleys with steam and convection ovens, espresso machines, blenders and ice machines promise gastronomic delights. The plane has four flight captains and 19 cabin crew well-versed in a number of languages.

The aircraft’s owners, global leisure and hospitality company Genting Hong Kong, which operates in the luxury hospitality industry space, turned down requests by The Hindu to offer information about the charter citing “customer confidentiality”. Sources at Chennai airport too declined to comment.

However, the mystery was solved when an aviation source in Mumbai said the aircraft had been chartered by the team of the film Tenet, an upcoming Hollywood film written and directed by Christopher Nolan and being shot in around seven countries.

The action thriller is scheduled for release next year. While the star-studded cast was completing its filming schedule in Mumbai, the aircraft was moved to Chennai to be parked and for crew rest.

The aircraft left Chennai for Mumbai early on Monday, September 23, and flew to Los Angeles later in the day.

The Marathi-language film, which looks at the world of classical musicians on the fringes of success, will be screened as part of the festival’s main slate Source Related

The subliminal sadness of ordinary love

On a recent vacation, I spent an afternoon in a cemetery. On some days, I sense the entire history of a city amongst its dead. On others, the sheer symmetry of the tombs and little chapels is breathtaking. More often than not, these visits feel familiar. Like an event not from the past but the […]