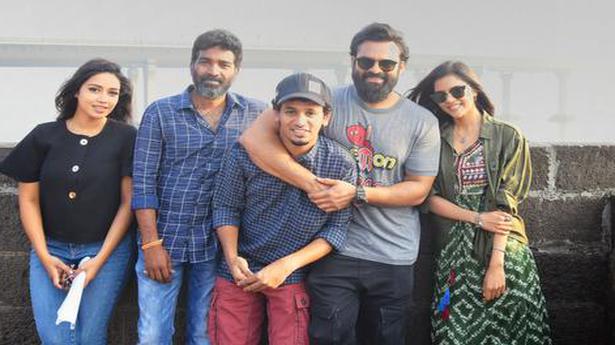 Cinematographer Karthik Ghattamaneni is never seen at social gatherings and official functions. He’s uncomfortable when facing a camera but at ease behind one. “I just go to Tirupati after the film wraps up and pray for the success, then I detach myself,” he shares during a chat. His film Chitralahari is set to release on April 12.

After Krishnarjuna Yuddham, Karthik didn’t take up any project for a long time, as he was committed to work on an untitled project to be directed by Praveen Sattaru. Unfortunately that got shelved after a spade work of six to seven months. He had to give up around six offersfor this project during that time.

Kishore Tirumala’s Chitralahari is the kind of cinema happening these days, the kind that works for Karthik. Until then, he had been getting only mass type of films. Commenting on his choice, Karthik states that there is no guarantee that films big in scale will work, but films like Chitralahari irrespective of the result, make him happy. He can contribute to the staging part and there is scope for creative freedom and discussions, as well as enough space and time to take the shots.

He has different strategies of camera placements for each director and film. He shares, “For three minutes of footage, you might take 15 or 10 shots but for the same footage in another film, there could be 50 shots and you don’t know if you are doing right or wrong. You can take too many shots if the planning is good. Sometimes for a formula film, on the day of shoot there is discussion happening, content improvisation happens on the spot and shot speed becomes problematic as we wouldn’t be ready. With spontaneous people, the process is different. With such directors around, I do key lighting only when actors starts performing; but in films like Awe, we did the lighting first and then called the actor for the shot. Each project has a different demand. Spontaneous shoot works with directors who are collaborative.”

Karthik comes from Rajiv Menon’s school where he was taught that if cinematography is clearly evident that means you are doing something wrong. If people say it is amazing then you messed it up. If your work supports it, then it becomes an invisible art form. He recalls his past two films and the feedback, “When people said lighting scheme in Awe was amazing, it meant they didn’t watch the film. For Ninnu Kori they said the film is nice and that is because they got connected to the story. After a point they are not seeing cinematography, they are seeing characters and their story.”

Karthik adds, “Both camera and story should travel together. Rajiv Menon would say if you are concentrating on photography, why choose films? For films of Sanjay Leela Bhansali, we see grandeur and we expect it, so we can show it on a big scale. When a character is living in a simple house, I don’t believe in elevating the scale.” He reveals directors Sekhar Kammula, Kranti Madhav, Kishore Tirumala are smarter, they don’t come up with their idea of their shot; they talk of content and want cinematographers to contribute. Only when they are not satisfied, do they suggest. They wait for the technician’s contribution, hoping their idea might be better. They value inputs.”

Since Chitralahari is about a guy with a lot of failures and his journey, Karthik treated it as a simple film that connects with young audiences. It is peppy, consistent, simple and candid, with a little stylisation through colour. Lot of yellows and blues were used and the art department kept it trendy. It is mostly an indoor film and the mood of the film keeps moving with the character’s mood. Seventy percent shot in Hyderabad and 30% in Mumbai.

It’s been a huge deacade for Disney; they’ve been on an aquisition high ever since their acquisition of Lucasfilm in 2012 and 21st Century Fox just this year. Ongoing now, at Anaheim Convention Centre in California, is D23 by the Official Disney Fan Club. As well as the new content which will have us ready […]

A fairly new theatre group from Bengaluru, the Big Fat Company (BFC), arrives in Mumbai this week with their new show, Name The Game. This is only their second production after the Hayavadana-inspired Head 2 Head, a play that attracted attention not only because of its spirited and unapologetically plus-size ensemble, but also its subversive […]

‘It was a ‘collision’ that became one big family’

Last year’s run of Nick Payne’s Constellations at the National Centre for the Performing Arts (NCPA) was a harbinger of sorts for its director Bruce Guthrie taking over as the head of theatre and film at the premier cultural institution, in what is its fiftieth year of existence. The flurry of activity at the NCPA […]