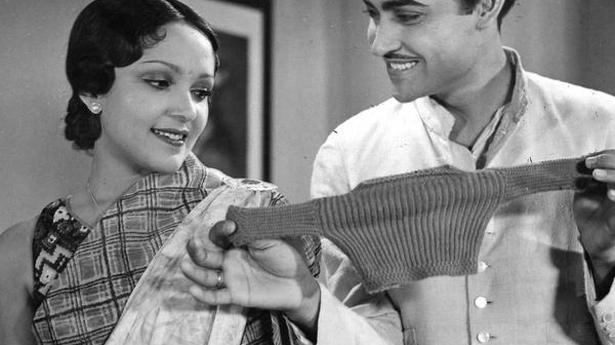 Devika Rani, the new play from the Primetime Theatre Company, focuses on the actress who holds an indefinite lease on the title of the first lady of Indian cinema. The play is written by author Kishwar Desai and directed by Lillete Dubey, and focuses on what is perceived as an actress’ prime — her years under the arc-lights — although conceivably, her life in Garboesque seclusion might well have made for a captivating study as well. In this production, a diligent Ira Dubey steps into the shoes of Rani, and Joy Sengupta tackles the part of Himanshu Rai, whose tempestuous marriage (and professional partnership) with Rani ran parallel to her decade-long career as iridescent prima donna of the early talkies.

What is immediately apparent as we settle into Desai’s narrative, is how the lives of leading ladies on celluloid, whether fictional or real, follow a rather predictably archetypal path. Rani’s early intrigues to garner a foothold in what was a fledgeling industry that was hers for the taking, the lure of lucre and fame, Rai’s depiction as a ‘sugar daddy’ (an age gap of 16 years) with his own cross to bear, all bear testimony to a standard issue cautionary tale about the price women must pay to succeed in a cynical profession. The signposts we are familiar with — the films, Bombay Talkies, the flagship studio Rai founded — are presented somewhat perfunctorily. Franz Osten, the idiosyncratic German filmmaker who was the architect of some of Bombay Talkies’ classics, is played by Marc Bennington, harnessing a broad German accent for comic relief, even as Rana Sachdev chips in a mildly amusing turn as Ashok Kumar.

In a play in which privilege is disconcertingly not seen as privilege, but rather as the status quo, perhaps the only character that escapes her paper-thin characterisation is Rani herself. Ira Dubey is never larger-than-life in the part, never quite her ‘screen’ alter ego, but her practiced speech and purposeful demeanour adds volumes to a performance that is refreshingly understated and well-calibrated. While the constant presence of her assistant, the fictional audience surrogate Purva (Akanksha Tambe), robs Rani of an effective interior world, Dubey’s porcelain fragility and moral rectitude gives even her go-getting avatar its soft edges. Rani’s affected acting style hasn’t quite withstood the test of time, and the play makes no pretence of casting her in the mould of a grand diva (a la, say, All About Eve) given to earth-shattering theatrics. It was her cultured poise and limpid eyes, and the studio sales pitch, that made her a mainstream icon. Dubey walks a tightrope when performing scenes from Rani’s movies. Vintage-era performing styles have been lampooned to great effect in plays like Amar Photo Studio. Here, the audience titters at the delivery, but to her credit, Dubey does not push it over the edge, and the homage stays on course.

The production really comes alive in set-pieces that reconstruct episodes from Rani’s life. One is speculative, as in the red carpet treatment accorded to Karma, her first film, in the States — a sea of imagined flashbulbs and faux American accents. The shooting of the iconic number, ‘Mein Ban Ki Chidiya’, from Rani’s landmark film, Achhut Kanya (1936), makes for a far more memorable sequence, with the song re-recorded in Dubey’s voice, but not sung live. The latter might seem like a cop-out given that Rani was a singing star, albeit in an era without sync sound. However, the slipping in and out of lip-syncing, while clarifying the use of recorded sound, creates wonderful allusions on stage of second skins inhabited and discarded with easy aplomb. Dubey’s printed blouse and simple cotton sari makes for great nostalgia, as does a later sequence in which she poses in a canary yellow bandhani sari for the Russian painter, Svetoslav Roerich, the man who was to become her life-long partner. The sartorial trappings of the bygone era have been authentically put into place by Pia Benegal.

Unlike, say, the inglorious swan song of Sunset Boulevard, Rani recedes much more gracefully into the background. Her years as producer are glossed over in the play, but Bennington returns as the measured Roerich. The grounded manner in which a woman of the world now receives a man’s proposition is a far cry from the dazzled ingénue we started out with. In Roerich, we discover a man who might admire the spark in a woman, but reserves the right to lay down the terms of engagement, making that life-force bend to his will as it were. Rani’s acquiescence is not capitulation on her part, but one of the first considered decisions of her life. It’s a wonderful thought to leave the play with.

It was 1985 and Albatros, a street theatre performance from Italy, was playing across many towns in Kerala. No one cared for the story; what left many in the audience awe-struck was watching actors running along the streets in giant stilts, almost as tall as the coconut trees. Albatros was performed at Irinjalakuda in Thrissur, […]

At first glance Rima Das’ Bulbul Can Sing appears to be carrying forward from where her much celebrated Village Rockstars left. Like the former, it is rooted in the daily rhythms of rural Assam. Her camera is in no hurry, it pauses and lingers long on the landscape — the ponds, the trees, the leaves, […]