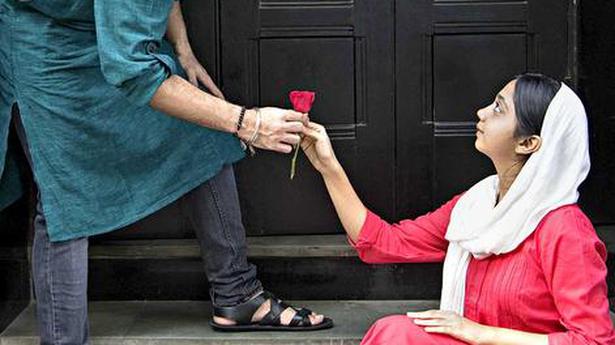 The spate of Valentine’s Day theatre specials this week, all presented by men, might be an happy accident but it does call attention to how even a phrase as innocuous as, “Will you be my Valentine?” is a gendered proposition. In the natural kingdom, where mating rituals are often described in hetero-normative terms, females preen and males strut. Conventional courtship is usually a male domain where the onus or agency of initiation and protraction ostensibly remains with the man, although some studies have indicated that the non-verbal behaviours of women could trigger and control courtship, but these notions are being constantly challenged and dismantled. That said, it is perhaps less than empowering for women theatremakers to kowtow to notions of courtship that originate in a patriarchy that has oppressed women for millennia (even if roses and chocolates are to be had). This is not apparently a conflict for men.

Through a modern prism

However, the sheer diversity of works on offer this week takes the commodified ethos of February 14 into somewhat edgier territory, where under the surface might lurch offbeat persuasions. While not explicitly billed as Valentine’s fare, a good place to begin could be the Amir Khusrau musical Jo Dooba So Paar which continued its run in the fringe circuit last weekend. Written by Ajitesh Gupta, the play intersperses rousing qawwalis attributed to Khusrau with narrative interludes fashioned along the lines of traditional dastangoi. The intense bond between Khusrau and his pir Hazrat Nizamuddin Auliya, is shrouded in language that is quite unambiguously romantic — one takes this by default as being ensconced in the realm of the spiritual, even if the connotations of unbridled love cannot be denied or not seen through a modern prism that is decidedly more sexualised. Gupta’s soaring vocals, ably supported by a team of musical accompanists and vocalists, provide his play several stirring moments of musical panache, even if the relatively prosaic dastaan portions merely amble along and could be extensively pruned. It works best if seen as a concert with a difference, even if Khusrau’s aphorisms could themselves have been worth the price of admission.

Among this week’s offerings are Deshik Vansadia’s Shakespeare’s Lovers and Nikhil Katara’s Letters of Love, another instalment in his Readings in the Shed series of rehearsed readings. Vansadia’s play has emerged out of Actors’ Club, a space where actors meet to hone their craft and keep “their creativity in motion”. It is an outing that is in keeping with his longstanding focus on the bard’s plays. From the ‘arranged marriage’ of Petruchio and Kate from The Taming of the Shrew, to the gender-crossed affair between Orsino and Viola in Twelfth Night, to the rhapsodic circumstances of Romeo and Juliet, Shakespeare’s Lovers touches upon agony and rapture equally through a series of vignettes performed by an eight-strong ensemble, including director Vansadia. For his epistolary evening, excavated with Himali Kothari, Katara has brought together three actors — Meher Mistry (fresh from her soulful turn in Rehaan Engineer’s Sounding Vanya), Keith Sequeira and Tavish Bhattacharyya — to give voice to love letters originally ascribed to figures as diverse as Simone de Beauvoir, Richard Feynman, Leonard Cohen, Carl Sagan and Rabindranath Tagore, among others. The evening unfolds through the gaze of Cupid himself, flustered by the erosion of love in these hate-ridden times.

Perhaps the cherry on top could be Javeda, a play written and directed by the upcoming Navaldeep Singh. It is a star-crossed (and deeply felt) love story between two men (Ahan Nirban and Aaryan Deshpande), one Hindu and one Muslim, set in a 1990s Mumbai riven by communal tension. That blurb might well have been preceded by a spoiler alert because the publicity campaign for the play comes across as a tad straight-washed — in the same way as Brokeback Mountain was initially showcased as a film about happy families. For many, a queer angle must still be introduced as a great revelation to purportedly insular audiences. Standard tropes of melodrama and comedy notwithstanding, Singh’s play gets its breathtaking preciousness from the choice of having the ‘female’ spirits of the men, played by Khushi Kothari and Yashaswi Gandhi, orchestrate a love affair for the ages all of their own.

Javeda at The Habitat; Shakespeare’s Lovers at Kreating Charakters; and Letters of Love at NCPA on February 14; see bookmyshow.com for details

Akbar Padamsee: The Sanskrit scholar among the Progressives

Akbar Padamsee’s passing away invited an elegiac silence in the contemporary art world. India has lost the Sanskrit scholar among the Progressives. Padamsee, as an artist, led us into a space of refined aesthetic, balancing between the hieratic and the human. In the best of two centuries, Padamsee nourished himself as the fountainhead of regional […]

In ‘Kennedy Club’, the girls are the heroes: Sasikumar

After more than a decade in the industry, and taking on a plethora of roles as a lead protagonist/ supporting actor, one would imagine that actor-director M Sasikumar has seen it all. “Not quite,” he grins, as he speaks about his role in filmmaker Susienthiran’s upcoming Kennedy Club that revolves around a group of female […]

Urvashi Rautela has wrapped up shooting for her upcoming untitled film, which is a Hindi remake of the 2017 Tamil hit Thiruttu Payale 2. The actress took to Instagram to share the news with her fans along with a beautiful video where she can be seen enjoying a boat ride on the Ganga in Varanasi. […]