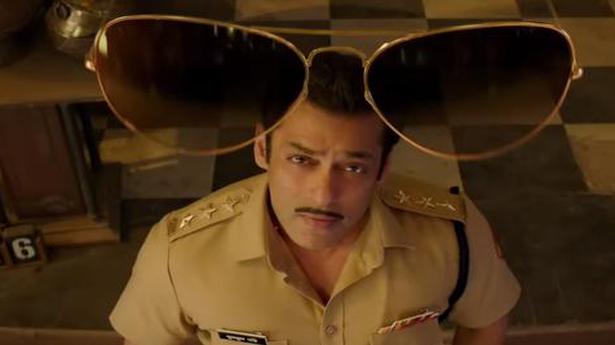 Salman Khan’s much-anticipated Dabangg 3 trailer was released on Wednesday evening, with the actor reprising his smash-hit character Chulbul Pandey. Other regulars like Sonakshi Sina and Arbaaz Khan will also be seen in the third installment of this franchise, that is directed by choreographer-actor-filmmaker Prabhudeva.

Prabhudeva and Salman had earlier collaborated for a hit in Wanted. Abhinav Kashyap directed the first Dabangg movie, while Arbaaz Khan took over the mantle for Dabangg 2.

In the clip, Salman introduces himself as a “policewala gunda” followed by several trademark Chulbul gimmicks and signature moves. The movie will also introduce Mahesh Manjrekar’s daughter Saiee Manjrekar as the love interest of younger Salman, and she is touted to play an important role in a flashback.

But fans will most look forward to Salman’s face-off with Kannada superstar Kichcha Sudeep’s character, known for his roles in other regional language films as well.

The movie is set to hit the screens on December 20 in Hindi, Tamil and Telugu.

Sadguru Sangeeth Sabha: Festival for all

The 24th anniversary celebrations of Sadguru Sangeeta Sabha that were held at at GVR Music College, Vijayawada attracted many young people among the audience. On the first-day, vocalist Vasudha Ravi started the concert with a brisk Daru varnam Mate Malaya Dhwaja Pandya Sanjathe in Khamas, setting the tone for the week-long celebrations. She next chose […]

‘Geetha Govindam’ and ‘HIT’ cinematographer Manikandan on his work mantra

Chennai-based DoP, Manikandan had worked in Mukunda, Srirasthu Subhamasthu, Geetha Govindam and now the just-released HIT. Is he elated at the appreciation the movie is getting? “HIT is a story that I fell for. From a cameraman’s perspective there’s a different way of approaching a thriller — a certain amount of ratio in the use […]