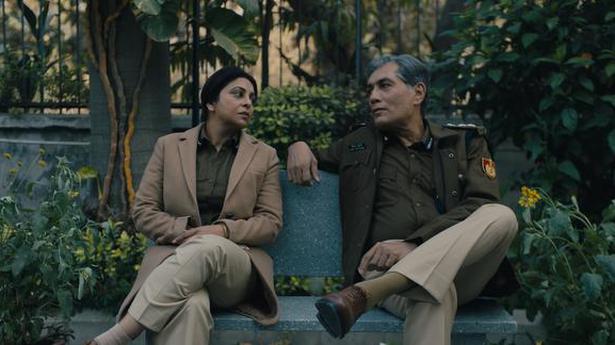 At the outset Delhi Crime establishes two things. That however far back into your memory you may have pushed back the heinous Delhi Gang Rape of 2012, it’s a wound that continues to fester. And, however contrarian may have been your experiences, impressions and apprehensions about the Capital’s “thullas” (Delhi slang for policemen), they conducted themselves impeccably in apprehending the culprits and in the speedy resolution of the case.

Thankfully Delhi Crime doesn’t go back to the crime in itself, there is no gratuitous visual detailing and elaborate dramatisation but the very mention of an iron rod, intestines, rectum and vagina are enough for anyone to feel the intense stab of pain; all over again. It’s hard not to be repulsed and enraged as the prime suspect Jai Singh (all names changed) goes about describing the deed in detail and capping it with the fact that he doesn’t have any regrets about doing it. Despite having known all about the rape, revisiting the insanity, inhumanity and barbarism, is as shocking for the viewer, as it was for the cops on the case.

“Papa ko mat batana (Don’t tell my father),” Deepika requests head constable Ram Pratap when she is picked up by the police from Mahipalpur roadside where she had been dumped—along with her friend Akash—after being repeatedly raped and brutalised. “Aaram aaram se chalana (Drive the vehicle slowly),” the elderly constable tells the driver with utmost concern and the ground is immediately laid out for what follows—a sympathetic portrayal of the world of cops.

Delhi Crime looks at the 2012 incident and its repercussions through the eyes of the policemen handling it. Each of them has a backstory, replete with throwaway details giving the show’s characters a humaneness that’s affecting. At the centre of it all is the DCP South Vartika Chaturvedi (Shefali Shah) —who is handling a gang rape while managing a rebellious daughter at home. There is the tactfulness in handling the team—from the SHO who wants to hit the gym when the investigations are at its peak to the call log specialist who is dying to go back home. The DCP, who rebukes a junior for trying to suck up to her (“Don’t blow smoke up my ass”), can also make coffee for the team and ensure that they eat well (“I need you to be healthy”). She is mad enough to feel like shooting them but is sure that she will “stand in between if someone else tries to shoot you”. Shah is on top of her game, conflicted yet sure of herself, vulnerable but strong, swayed by emotions yet never giving in to them, bristling equally with anger, concern, disappointments and dejection.

There is her trusted lieutenant, Inspector Bhupendra Singh (Rajesh Tailang), who heads the Special Task Force of the South district, yet faces humiliation while negotiating his daughter’s marriage. Tailang’s control, poise and measured way plays out beautifully against Shah’s dynamism to give us arguably the best on-screen buddy-cop team seen yet in India.

At yet another corner you have the young, new IPS recruit Neeti Singh (Rasika Dugal) who wants the heady big city experience and freedom from home. Her first round of duties—to be with Deepika and her parents—proves to be a tough call, changing life unalterably.

The hunches and thinking of the cops towards the crime are revelatory of the fundamental social equations, rather the lack of them, at the heart of darkness. There is Bhupendra’s persistent suspicion of Akash—almost holding him responsible for what was brought on them—against which there are sub-inspector Sudhir Kumar’s perceptive, canny observations about the schisms between the rich and poor, the lack of sex education and the objectification of women – all of which get bundled in crimes and misdemeanours.

On the flip side the broad brushstrokes in Delhi Crime are easy to spot. The media frenzy, the games played by politicians, the ministry of home affairs’ tussle with the state government and the portrayal of the chief minister – all of which are the show’s villains. The cops, on the other hand can do no wrong. Their minor flaws are indulged in. Even when in the wrong they are provided a justification. Being stoned at checkpoint duty? Well they were working for two continuous days. There is strong stress laid on the fact that Delhi Police is underpaid, overworked and under-staffed with limited budget at their disposal, electricity bills of the cop stations are met with their petrol budget, until that too gets exhausted. The cops have to run from pillar to post to get their arrears sorted. It’s a sad life out there.

Pulling favours with the Central Forensic Science Laboratory (CFSL), bribing a source with Glenfiddich, the dangers faced as crack teams—the rough and rustic methods might be very different from the sophisticated police procedurals seen in the Western serials. But Delhi Crime makes the ways of Delhi Police seem as persuasive as that of say the Los Angeles Police Department. The narrative flows smoothly from one set of characters and space to the other. The telling is matter-of-fact, without any dramatic flourishes or emotional indulgences; terse, gripping and disturbing, making a good crime drama, just a click away.

They were India’s golden couple of the 1920s and 1930s, two beautiful people who cut a wildly glamorous dash across the globe, being photographed by Man Ray and sipping cocktails with Hollywood stars. The extraordinary lives and impeccable taste of the yesteryear Maharajah and Maharani of Indore — Yeshwant Rao Holkar II and Sanyogita — […]

Between the playful and the political

A crossover genre with multiple influences, performance art continues to be intriguing, strange and full of surprises as it increasingly occupies more space in the arts arena in the country. Often immersive, amusing and rooted in radical acts, performance art is still considered relatively nascent in the Indian contemporary art scene. It eludes definition and […]

This fairy-tale adaptation is a multi-sensory experience

You half expect to run into a witch as you walk through the dim-lit passages of the theatrical set based on the Hansel and Gretel fairy tale. Especially, when the show is from a theatre company that goes by the name Trickster-p. But, there’s no sorceress cosplay in the Swiss company’s feted production .h.g. which […]