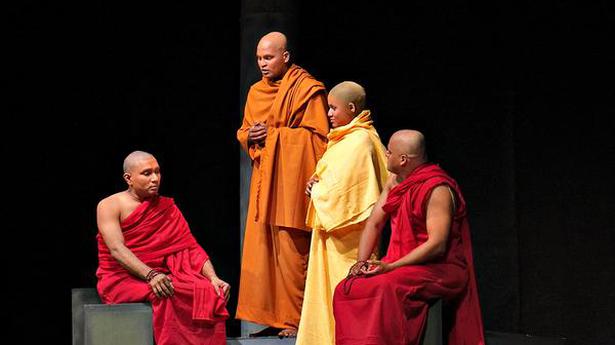 The third generation of an almost 70-year-old Goa-based theatre company, the Hauns Sangeet Natya Mandal, has taken over the reins in recent years. In what is a cultural resurgence for the group, their new production, Avyahat, won top honours at the 58th Maharashtra State Amateur Marathi Theatre Competition in March. It will now be staged at the historically significant Mumbai Marathi Sahitya Sangh, as part of the Damu Kenkre Smriti Natyotsav, the five-day experimental theatre festival named for the noted Marathi stage director, who passed away in 2008. Avyahat is adapted from Amita Kanekar’s 2014 novel, A Spoke in The Wheel, by Kaustubh Naik and directed by his brother, Rohan Naik. The writer-director duo’s grandfather, the redoubtable Vishwanath Naik, founded the company in 1950. It continues to operate from the culturally rich city of Ponda in central Goa.

What has always been a norm for Hauns is to gear its production schedule towards an annual drama competition at Panjim’s Kala Academy, the 51st edition of which was observed in January this year. “Premiering at the Dinanath Mangeshkar Kala Mandir is a family tradition. Barring five or six years, we have never missed sending an entry,” says Kaustubh, whose Marathi translation of Abhishek Majumdar’s Kaumudi in 2017 marked his foray into stage writing, for his production house. He has, of course, emerged from its theatre ethos, running the gamut from stage-hand to musical accompanist to dramaturge.

Kanekar’s epic novel has a cinematic sweep and a multi-layered narrative. It is set in the third century BCE, during Asoka’s reign, when he co-opts the monk, Upali, to write a hagiography of the Buddha. What emerges is a work that demystifies the religious fountainhead in no uncertain terms. In the backdrop simmers the bitter repercussions of Asoka’s vicious Kalinga campaign. “The novel responded to many personal concerns, bringing to the fore caste discrimination, the debate around the rights of forest dwellers, and the nexus between religion and power,” describes the playwright. The play’s title literally means ‘never ending’, a reference to the unending cycle of violence and, perhaps, the perpetual churning of the wheel of dhamma.

Avyahat focuses on selected narrative strands from the book, and the climax, which involves fire as a motif, was changed for technical considerations, as most prosceniums forbid the use of live flames. The play was mounted over an economical three-month production schedule, which includes the scripting that took place concurrently. Its cast and crew strength runs into more than two dozen members. The up-and-coming Keatan Jadhav plays Upali, and is pitted opposite warhorse Bipin Mangeshkar as Asoka, in an ensemble that reflects a tantalising mix of the old and the new. What the scions have inherited, besides an established reputation, is the means of production to continue mounting plays and support networks. “While I was conditioned to be part of the company, it took some time to choose it as my own calling,” says Kaustubh, who studied Computer Applications at Sinhgad, before shifting to Performance Studies at Delhi’s Ambedkar University. Even with all resources at their disposal — actors, technicians, rehearsal spaces — insufficiency of funds is an impediment, which is why competition season remains sacrosanct, as cash prizes go a long way towards offsetting production costs. A slew of second-place finishes at the Kala Academy event saw the group amass a tidy sum, as did the Best Play and Best Director (for Rohan) citations at the Maharashtra state event. Not accustomed to touring with their productions, the outing to Mumbai with such a large troupe has thrown up fresh challenges. “Opening at a competition allows us to be indulgent regarding a play’s production design, but the sets are ultimately not portable,” explains Kaustubh.

The Mumbai shows (a second performance is slated for June) will be staged sans the Buddhism-inspired sets, but will still carry the charge of history, both in theme and legacy.

Avyahat will be staged at Mumbai Marathi Sahitya Sangh, Girgaon on May 6 at 6.30 p.m. Free entry.

When Karan Johar uploaded a video on Instagram of his house party, the filmmaker may not have imagined the furore it would cause. Featuring several celebrities like Deepika Padukone, Shahid Kapoor, Ranbir Kapoor, Vicky Kaushal, Arjun Kapoor and Shahid Kapoor, the video captioned “Saturday night vibes” has Johar showing the Bollywood actors in conversation with […]

Frequent collaborators Michael Pitiot and Yann Arthus-Bertrand’s documentary, Terra is a sprawling but impressively shot ode to the planet. Between mesmerising shots of Mount Roraima swathed in clouds and stomach-churning visuals of a slaughterhouse in China, the film maps the evolution of life on Earth before dwelling on the widening chasm between humans and other […]

Clowning around with the classics

A whopping century of shows and counting, could well be theatre’s version of the 100-crore milestone, and likely costing just a nano-fraction of that. At 110 shows over a little more than a year, Rupesh Tillu’s adaptation of a fourth century opus by Kalidasa, performed by a trio of clown-actors and titled Shakuntalam (Agar Pura […]