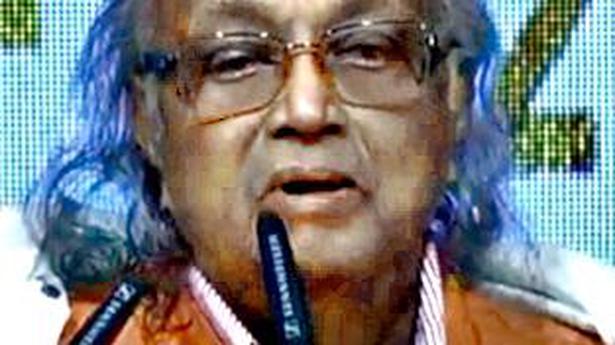 The award, at the 16th edition of the festival, celebrates his lifelong contribution to non-fiction filmmaking. Dr. Krishnaswamy said, “It is very difficult for the voice to come up when you are on cloud nine. I am speaking from my heart. I have never accepted to make a single film in which I did not believe,” said the filmmaker, renowned for his four-hour From Indus Valley to Indira Gandhi that traces the history of India.

He received no financial help and took over 15 years to make the film, which was eventually distributed by Warner Brothers in 1976.

Dr. Krishnaswamy reminisced about the day he got to know that the Parliament had discussed this film for 40 minutes. “I sent a message to the then I&B Minister Shri L. K. Advani, expressing my gratitude, but also saying that it would have been more beneficial for the parliamentarians to watch my film. A leader of stature, Shri Advani organised a show for himself and for some of his colleagues,” he said.

The chief guest for the film festival’s opening ceremony, Union Minister of State for Environment, Forest and Climate Change, Babul Supriyo, and the guest of honour, State Minister for Cultural Affairs and Medical Education Amit Deshmukh, presented the award to Dr. Krishnaswamy.

Dr. Krishnaswamy has made socially relevant documentaries, more than 200 non-fiction films and several television serials. His 18-episode series Indian Imprints on the impact of ancient India over South East Asia, which aired on Doordarshan in 2009, received overwhelming response.

Dr. Krishnaswamy was awarded the Padma Shri in 2009, and is a recipient of the Lifetime Achievement Award from the U.S. International Film & Video Festival, Los Angeles.

The Dr. V. Shantaram Lifetime Achievement Award, given every year at MIFF, includes a cash award of ₹10 lakh. In the past, filmmakers such as Shyam Benegal, Vijaya Mulay and Anand Patwardhan have been bestowed with the honour.

The award is instituted in the memory of legendary filmmaker V. Shantaram, who was closely associated with Films Division as honorary chief producer during the 1950s.

Model-turned-actor, Vidya Pradeep, 26, is a multi-hyphenate. When not playing Anandhi in the popular television soap Nayaki on Sun TV, she is pursuing her doctorate in stem cell biology at a private eye hospital in Nungambakkam. “I never watched movies as a child,” says Vidya, who has a master’s degree in biotechnology. “We had no […]

Portrait of a strained marriage in modern-day Romania

Last year, Romanians were asked whether they wanted their constitution altered to specify that marriage can only be between a man and a woman. The rather expensive referendum failed because of a low turnout (turnout was less than 30% making the vote invalid), despite a push from the Orthodox Church. Marius Olteanu’s Monștri. (Monsters.), a […]

Thiagarajan Kumararaja directed his debut, Aaranya Kaandam, back in 2011, then fell off the radar. “I was just chilling,” he says nonchalantly. And what did that entail? “Trying to be as close to a non-living thing as possible. I’d visit friends, hang out.” It is those friends who had his back till the time he […]