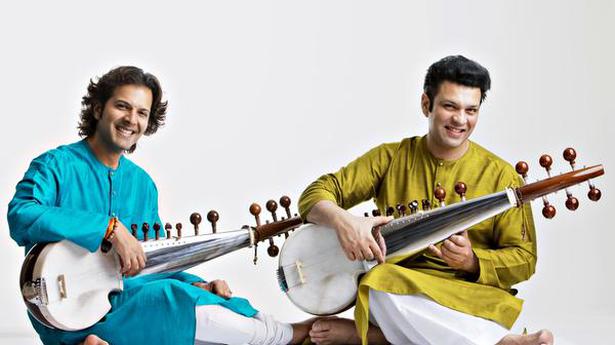 As a genre, Indo-fusion has been around since the 1970s, but the number of album releases has been sporadic over the years. Simultaneously, there have been numerous concerts in the genre, though many end up being impromptu jamming sessions. Keeping that in mind, the recent release of two fusion albums seems to shake the pattern we’re used to. On Namo, the group Namo Fusion has marvellously blended Carnatic raags with Western arrangements and a techno flavour to create a set of fantastic tunes. In the other project Infinity, sarod players Amaan and Ayaan Ali Khan have teamed up with composer-percussionist Karsh Kale to mix Hindustani melodies with electronica. Both the albums are structured well, with tight compositions and a clear thought process. Namo Fusion comprises violinist Dr. Narayan Raman and guitarist Sarosh Izedyar. The duo’s moniker is derived from a Sanskrit term translating to bowing down with respect. While the title track and its club version ‘Namo (Reprise)’ use raag Saramati and are based on the emotion of respect, ‘Freedom’ (in raag Karnaranjini) is dedicated to the armed forces and ‘Departed Souls’ (in Panthuvarali) pays homage to those who have left us. The peppy ‘Happy Kalimba’ and innovative ‘Relay Express’, which uses the concept of a relay race, add to the charm. Namo has shades of early Shakti and the fusion albums of violinists Dr. L. Subramaniam and L. Shankar, but there’s something fresh about the way the compositions have been approached and arranged. If its base is Carnatic, the brothers Ali use Hindustani raags on Infinity. While the mood-setting title track is based on raag Kamod, the concluding piece ‘Journeyman’ features sarod maestro Amjad Ali Khan. Karsh Kale’s electronica merges effortlessly with sarod riffs on ‘Home’ and ‘Believe’, which has elements of raags Shree and Poorvi. Two vocal numbers ‘Darkness’ and ‘Space Between’, featuring Pavithra Chari and Anindo Bose of the group Shadow And Light, provide variety. Overall, the album reminds you of late 1990s lounge releases and some of Nitin Sawhney’s and Talvin Singh’s work. Both these albums should be able to attract those who love good, planned fusion.

Talking of fusion, one must mention the brilliant Perfect Amalgamation concert conceptualised and composed by Siddharth Kasyap that took place last month. Rather than just jamming haphazardly, the musicians went by the composer’s songbook, and the marvellous animated visuals and lighting added to the aura. Coming January, ace guitarist John McLaughlin is releasing the album Is That So? with vocalist Shankar Mahadevan and tabla maestro Zakir Hussain. An excerpt from the track ‘The Beloved’ is out on YouTube, and is a mix of Carnatic vocals and jazz guitar. The times seem to be interesting for Indo-fusion, but we need many more regular releases to think of a revival. Needless to say, the industry needs to back the genre with more focus.

Namo is available on all major streaming platforms; and Infinity is currently a JioSaavn exclusive

Director Gautham Vasudev Menon has confirmed the release of his long-pending movie Ennai Noki Paayum Thota on September 6 with an official release trailer. He posted on Twitter, “With due respect and thanks to everybody involved with this film, the investors, people who have stood by the film and me, to those who have invested […]

BBC’s ‘Earth From Space’: An eye in the sky

Earth from Space, the new series from BBC, shows the natural history of our planet from a brand new perspective. After successfully capturing the living world with the aid of cameras on ground as well as in the air, they now turned to space for a new dimension. “We only have one planet, one home […]

It is not the end of an era, Shyamala G Bhave’s students say. Her school, Saraswati Sangeet Vidyalaya, will take her beliefs forward Source Related