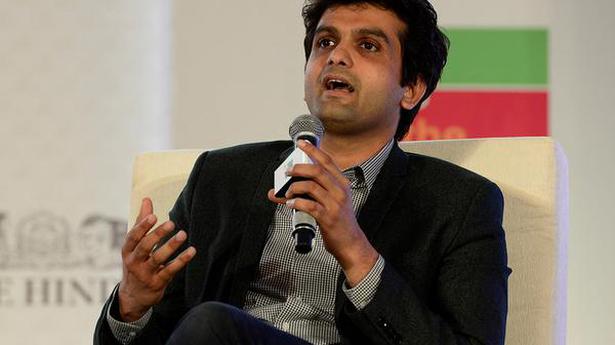 Amit V. Masurkar disagrees vehemently to the mention of elections and democracy in the same breath.

“Elections are also conducted in North Korea, so let’s not equate elections with democracy!” says the young filmmaker for whom it’s the principles of freedom, equality, fraternity and secularism that are of paramount importance, the bedrock of India’s democracy; the values that India has always aspired for.

Mr. Masurkar’s sophomore film, Newton, is a unique Hindi film set in a polling booth in conflict-ridden Chhattisgarh’s Dandakaranya, one of the most authentic and biting representations of the electoral process in Indian cinema. Premiered at the Berlinale 2017, the movie was India’s official entry for the best foreign language film at the 2018 Academy Awards.

On the eve of the film’s premiere, Mr. Masurkar had spoken about how the film had come to him while reading the Preamble to the Indian Constitution. “It gives you goose flesh, you feel uplifted while reading it but what is practised is different,” he had said, about the disparity between the written word and its implementation. Something that Newton also aims to question by focusing on the frenzy of the largest election in the world, by zooming in on the spectacle of democracy and the one day when the common man supposedly matters the most.

“I was fascinated by the way elections are conducted in conflict areas by ordinary government servants who at times show exemplary courage,” Mr. Masurkar says on the eve of the 2019 Lok Sabha election.

Setting the film in Chhattisgarh, a hitherto unseen space for popular cinema, also meant bringing this essential dichotomy into focus. “The common people in the jungle area are under tremendous pressure from the government to vote, and from the Maoists to boycott the election. It becomes extremely dangerous for an individual to express a nuanced or a third opinion,” he says. So the only decision-making power available to the common man, once in five years, also comes rife with dangers.

The film is set in one location, over one day and is narrated from the point of view of an upright, idealistic polling officer, Newton, who is also an outsider to the world he is stationed at. “The audience enters the jungle with Newton and stays with him as he struggles to conduct free and fair elections. We tried to show whatever we could with this story design in mind,” recollects Mr. Masurkar. As opposed to Newton is the apathetic, cynical CRPF commandant Atma Singh, who having seen many such polls, regards it as just a mock-up — does anyone truly care about an election?

From the cut-outs and posters of the candidates in the “Great Electoral Circus” to the voting machines and party symbols that leave the tribals flummoxed, Mr. Masurkar uses gentle humour as a tool to make a strong comment. There is the irony of a politician selling the idea of laptops and mobiles as “development” to the most backward of regions in the country. Then there are the tribals — caught between the state machinery and the insurgents — who just want the right price for their tendu leaves but are perceived as nothing more than a vote bank.

Bringing the elections alive on screen meant intensive and extensive research. People, books, documentaries, news reports all went into shaping it. Mr. Masurkar, and co-writer, Mayank Tewari, interviewed journalists, academics, retired CRPF officers, surrendered naxals, tribal activists and common people. “Nandini Sundar, Rahul Pandita, Ilina Sen, Bela Bhatia and many others helped shape our ideas. Journalist Javed Iqbal guided us through the research process and his photographs of a village and school in Dantewada destroyed in conflict were used as references to build the set,” he says. In Bastar, they met Mangal Kunjam who became their script and Gondi language consultant. “He’s a young, sharp and articulate journalist and tribal activist who has been fighting the forced displacement of Gondi Adivasis due to the pressure from the mining lobby,” he says.

While Mr. Masurkar may have moved on from Newton and working on a new project, elections continue to intrigue him at a larger level: “Every five years, the most powerful people go to the powerless and beg for votes. Even the best Bollywood writers, with their imaginations running riot, can’t predict some of the twists and turns in politics.” Least of all when it comes to the2019 election.

Laguparan has an interesting career trajectory. He started out as an assistant director, made his acting debut in Raatinam (a 2012 romantic drama), has shared screen space with Charlotte Gainsbourg in a French film, Son épouse (2014), and went back to assisting filmmakers (Kamal Haasan’s Thoonga Vanam). Then came this year’s thriller, Sathru, where he […]

Raw and relatable — these two words form a loop that echoes in my head as I walk into Ashvita’s recently-opened art gallery. Nothing about it looks like a typical gallery, be it the rough, cemented and seemingly ‘unfinished’ floor or the metal brackets that jut out in neat rows from the roof. These are […]

The RD-SD fascination and the music of ‘Jewel Thief’

Newer and younger waves of music lovers and performers rediscover and reconnect to R.D. Burman’s genius — and this provides us with newer and fresher insights into his music. We also learn about how far back his influence made itself quietly and anonymously known in his father S.D. Burman’s compositions too. His new arrangements and […]