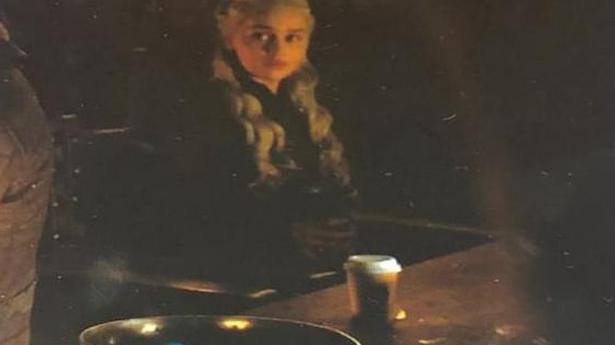 Months after Sophie Turner blamed her for the infamous coffee cup gaffe on Game of Thrones, Emilia Clarke has revealed Conleth Hill, who played Varys on the show, as the real culprit behind the goof-up.

A takeaway coffee cup had found its way on Daenerys Targaryen (Clarke)’s table in a celebratory scene when the heroes gathered to celebrate their victory at the Battle of Winterfell.

The presence of the coffee cup created a stir in the fourth episode of the HBO series final season in May, which led to a flood of memes and jokes on social media.

Turner, who played Sansa Stark in the show, previously implicated Clarke on The Tonight Show with Jimmy Fallon for the cup. She also blamed Kit Harington earlier.

Clarke revealed the “truth” to Fallon in a new episode.

The actor, who will next be seen in Last Christmas, also explained why Hill didn’t come clean sooner.

“He’s like, ‘I think so, I’m sorry darling, I didn’t want to say anything because it seemed (like) the heat was very much on you’ And I was like, ‘What?!’”

Clarke then said she also thinks Hill did it, adding “He might have been drunk, but he said it”.

A 36-year-old Indian stand-up comedian in the UAE collapsed and died on stage in Dubai while performing in front of a packed audience, who thought it was part of his act, according to a media report. Manjunath Naidu, 36, suffered a cardiac arrest while performing his routine on stage on July 19. He complained of […]

Fire and thread: Game of Thrones tapestry is unveiled in France

The French town of Bayeux has been home for nearly a millennium to a tapestry depicting a bloody battle for power. Now it has another. An exhibition featuring a tapestry illustrating the events of hit HBO TV show Game of Thrones opened in Bayeux, Normandy, on Friday, just down the road from the museum where […]

In the corner of Vincent Van Gogh’s Starry Night, is the moon, facing away, as if ready to exit the frame. This very moon is the centrepiece of Tabrez Alam’s work of art. The cheesecake yellow backdrop is embellished with the silhouette of Elliot carrying ET on his bicycle, riding across the sky — and […]