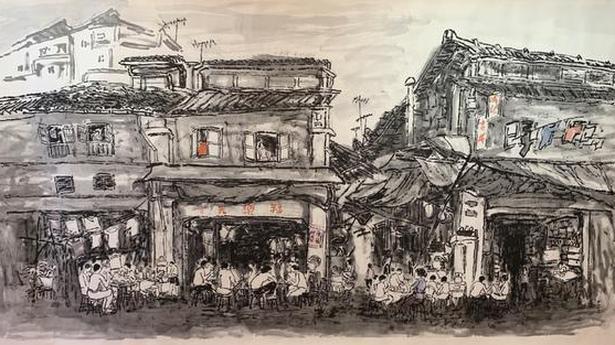 The metropolitan city is an amorphous being, that’s continuously rearranging its landscape. While certain pockets are still dotted with traditional homes, glass buildings are the more popular template in a modern world. Photographs, artworks, poetry, and literature document these shifting cities, as they grow, and disappear, all at once. For 99-year-old artist, Lim Tze Peng, the rapidly changing landscape of Singapore where he resides has been the muse of a longstanding calligraphy and painting oeuvre.

In the show, titled The Spirit of Ink, the artist showcases his historic documentation, and abstract paintings, for the first time in Mumbai.

The Dr. Bhau Daji Lad Museum, in collaboration with IDF (Innovation & Design Forum) Singapore, The Ode to Art gallery, and the Consulate-General of the Republic of Singapore, presents Peng’s sketches of old Singapore, particularly Malay kampongs, early Chinatown, and the Singapore River. Additionally, visitors are given a glimpse into his passion for painting trees, and large abstract calligraphy works that the ambitious artist painted over the course of 2018-2019. “[Tze Peng’s] art has spanned half a century, and I’m humbled to be able to record his distinctive style, and its changes [through] different time periods,” shares curator and gallerist of Ode to Art, Jazz Chong.

In 3D-esque calligraphy works of China Town, Peng captures the frenzy of the once busy neighbourhood, that’s now mostly taken over by skyscrapers. You can almost hear the cacophony of sounds erupting from the bustling markets, packed shop houses, street stalls, and bobbing bumboats that mapped the essence of Chinatown and the Singapore River before the landscape was overhauled in the 1980s. Somewhere between watercolour, and sketchbook drawings, these paintings on rice paper, speak of the artist’s attention to geographical detail, and his personal connection to the place.

In the 1970s, the Singapore River was home to approximately 4,000 people, including hawker stalls and vegetable wholesalers, who sold their wares both on and off land. But in 1977, the government shifted the riverside communities into public housing and sanctioned hawker centres, for the maintenance of hygiene. The crowded river now stood still, and the bridges that arched above it were suddenly refurbished. Peng took it upon himself to map these architectural landmarks, and Singapore’s colonial past in his drawings, which distinctively show life by the waterside. His panoramic painting overlooking the Singapore River resembles a sepia photograph made on film, fading over time.

In the past decade there has been a significant shift in the artist’s style, that’s apparent as you walk through the multiple rooms of the exhibition. Moving away from structured city maps, the artist began to indulge in his emotional connect with trees and nature. “Trees have character, and personality. Whether crooked or straight, there is an inner beauty in things that are irregular, and yet regular,” shares Peng. During this phase, the artist discovered Japanese colours and acrylic ink which brought vibrancy and pop into his newer works.

Since Peng was now interested in experimenting with larger strokes, he began using Korean paper that was denser than his traditional Chinese rice paper. This led him to clip it vertically onto large planks, which requires him to stand and paint till date. The shift played a drastic role in the evolution of his style, as the artist began using a thicker brush, and painted using his whole body, rather than just his wrist. As the exhibition note elaborates,“The vertical placing also introduced gravity to the fluid nature of his ink, resulting in large splashes and organic drippings.”

Through the years, the calligraphy painter has became more introspective, which made his work increasingly abstract. “In my earlier works, I primarily painted what I saw. Now, at my age, I reflect, and then draw,” he explains. While Peng’s latest works might not reflect the same minute detailing, they serve as his visual diary that keeps him going. He follows a strict routine of painting at 2 p.m., and stays in his studio for as long as his stamina allows it. When asked in an interview what drives him to continue creating, he smiles, and says, “Life ends, but art transcends time.”

The Spirit of Ink is ongoing at the Dr. Bhau Daji Lad Museum, Byculla, until September 15.

Game of Thrones star Sophie Turner has taken a swipe at actor Evangeline Lilly who had said that she won’t be going into self-quarantine amid coronavirus outbreak, as she values freedom over everything else. The Ant-Man and the Wasp star’s comments on social distancing didn’t go down well with Turner, who urged her fans to […]

On the eve of ‘We Are One: A Global Film Festival’, De Niro takes on U.S. President

Talking about the coronavirus onslaught in the U.S., the actor said “the situation could’ve been minimised if we had the right team in the White House.” Source Related

Ryan Reynolds set to be back with ‘Deadpool 3’

Actor Ryan Reynolds will be back as the popular foul-mouthed superhero Deadpool in the third instalment of the film franchise. Screenwriters Rheet Reese and Paul Wernick are preparing a script for a new movie featuring Reynolds as the titular star. Deadpool 3 is currently waiting for the green light from Marvel Studios, reports dailymail.co.uk. The […]