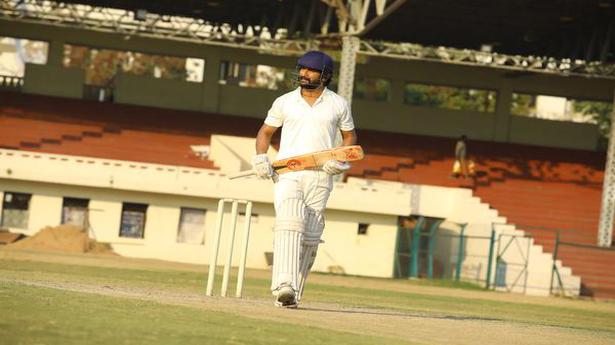 The drought at the box office ended first with the arrival of Majili and then Jersey, which is off to a roaring start. Incidentally, cricket is a part of both these stories and the films couldn’t have come at a better time to cash in on summer holidays and the (IPL) cricket fever.

While Majili was appreciated for Samantha and Naga Chaitanya’s performances than for its cricket, Jersey is winning appreciation for its screenplay and direction, impeccable performances, and the professional portrayal of cricket.

In an earlier interview with MetroPlus, writer and director Gowtam Tinnanuri had mentioned that the idea for Jersey came from an interview in which Harsha Bhogle dwelled on what makes Sachin Tendulkar an icon. And lead actor Nani had mentioned that he felt as though an unseen force was guiding the team during the making of this film. The film is proof enough that the team did all it could to present a labour of love.

On social media, film and cricket buffs have been showering praises on Jersey’s production design (by Anivash Kolla) that brought to fore cricket accessories and clothing that befit the 80s and 90s. Even the poster of Sachin Tendulkar gifted to the child actor Ronit harks back to the mid 90s.

Discussions have also been rife, comparing the day-night Ranji trophy match in the film to real matches in 1996. A few have drawn analogies to real cricketers struggling to be in India XI despite their talent, just like the protagonist 36-year-old Arjun (Nani). Twitter user Vikram Kadiam referred to the recent case of 33-year-old Ambati Rayudu not finding himself in the Indian playing squad. Avid sports buff Venkat Raghav has pointed out how players like Shantanu Sugwekar and Amol Mazumdar who played well in the 1996/97 Ranji trophy never got a chance to represent India in international matches.

Gowtam, Nani and Shraddha Srinath have been basking in appreciation from the film fraternity and those who’ve watched the film. In fact, this massive outpouring of love for a Telugu film hasn’t happened since last summer that had memorable films like Mahanati. Nani, in particular, has come in for praise for his restrained and internalised portrayal of a failed cricketer who wants to shine in his son’s eyes, and for his on-screen flair for batting. So much so that actor Vijay Deverakonda remarked in lighter vein that Nani should play for Sunrisers Hyderabad!

Also, have you noticed that the naming of the lead characters, Arjun and Sara, alludes to Sachin Tendulkar’s son and daughter? Chew on that.

One of Mahatma Gandhi’s favourite bhajans ‘Vaishnav Jana To’ written and composed by the 15th century Gujarati poet-composer Narsinh Mehta lays emphasis on the ideals and virtues one has to follow in life. It was a must rendition at the Sabarmati Ashram during the days of Mahatma Gandhi. Ever since, the bhajan became popular, and […]

‘I’ve been friends with Dhanush for nearly 10 years,’ says Manju Warrier on her ‘Asuran’ co-star

Nervous, excited, happy, anxious… Manju Warrier goes through a gamut of emotions as I catch up with her to talk about Asuran, which releases on October 4. Having breathed life into the character of rustic Pachaiyammal in the Vetrimaaran flick, starring opposite Dhanush, Manju can’t wait to know the audience’s reaction. “I have been blessed […]