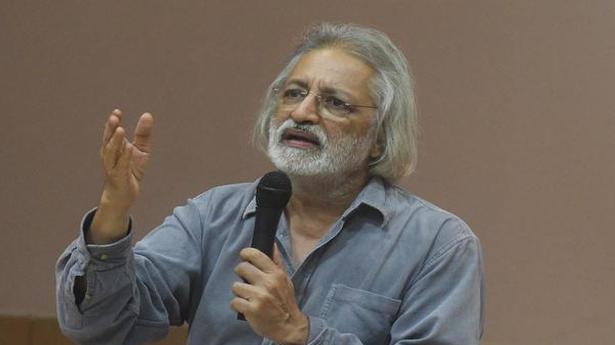 Film-makers Anand Patwardhan and Pankaj Rishi Kumar along with others on Tuesday alleged “backdoor censorship” and “absolute control exercised from Delhi” in the selection of films to be screened at the 16th edition of the Mumbai International Film Festival (MIFF 2020).

Addressing a press conference, hours before the start of the festival, they also shared short clips and details of the films “rejected” by MIFF 2020. Pankaj Rishi Kumar’s Janani’s Juliet, Anand Patwardhan’s Reason/Vivek, Deepti Gupta’s Shut Up Sona are three of the significant films that have not been found suitable for screening.

Pankaj Rishi Kumar’s Janani’s Juliet, a searing look at caste politics through the rehearsals and performance of an adaptation of Romeo and Juliet, won the Best Long Documentary prize at the International Documentary and Short Film Festival of Kerala ( IDSFFK).

Deepti Gupta’s Shut Up Sona on the outspoken singer Sona Mohapatra’s fight against sexual discrimination and harassment and for an equal space for women, is in the official line-up of the on-going International Film Festival of Rotterdam(IFFR).

However, these three are just a few of the significant films that have not been found suitable for screening at the Mumbai International Film Festival that kicked off on Tuesday.

MIFF is the oldest and largest biennial film festival of non feature films in South Asia and is organised by Films Division of the Ministry of Information and Broadcasting.

It was launched in 1990 as Bombay International Film Festival. One of its highlights was that it did away with the requirement of censor certificates. Many Indian films critical of government policies and ideologies were not only selected in MIFF but even won awards. Among them were Patwardhan’s own In Memory of Friends, critical of the government’s role during anti-Sikh riots and sectarian violence in Punjab and Ranjan Palit and Vasudha Joshi’s Voices of Baliapal highlighting protests against a missile base in Orissa. Patwardhan even won the Dr V Shantaram lifetime achievement award for contribution to documentary film movement in India at the same festival in 2014.

According to the film-makers it was in 2003, in the wake of the Gujarat carnage of 2002, that a censor requirement for Indian films at MIFF was introduced. As a counter to it, film-makers successfully mounted a popular protest festival called Vikalp. The censorship clause at MIFF was then withdrawn and stayed off the agenda. But by 2016 it started becoming increasingly clear that films critical of the ruling ideology would just not get selected in MIFF.

This year the prominent films that have been overlooked include Pradeep K.P. (Deepu)’s Our Gauri that follows the political journey of late Gauri Lankesh and her fight against right-wing communal forces. The week-long festival of documentary, short, fiction and animation films that starts today will conclude on February 3. Sunil Kumar’s Ammi is on student Najeeb’s disappearance on October 15, 2016 from the Jawaharlal Nehru University campus, New Delhi, and the lack of progress in the investigations by the various investigating agencies. Deepa Dhanraj’s We have not come here to die, is about students all over the country breaking the silence around their experiences of caste discrimination in universities and the start of anti-caste movement in the wake of the suicide by dalit Phd research scholar and activist Rohith Vemula.

Even films slightly against the philosophy of those in power have been rejected by the “sanskari panel,” alleged Mr. Patwardhan. A film on the syncretic culture of Delhi, Yousef’s Saeed’s Dilli Yadon ki Mehfil couldn’t pass muster. Neither could Vani Subramaniam’s take against death penalty–The Death of Us.

According to Pankaj Rishi Kumar it is part of the larger agenda to control every institution. “They are not interested in arts and culture… In the future films won’t be made, save by the bhakts,” he said tongue in cheek.

The filmmakers also highlighted that 23 hours of time reserved for competition films in the festival has been brought down steadily by about 8 hours, that the RTI to MIFF on the selection was not responded to because of some small technicality and that some of the administrators’ own films have been selected for the festival.

Kumar and Patwardhan had filed a petition in the Bombay High Court asking the government to show cause as to why their films were rejected from all categories at MIFF. “While the case has now been withdrawn due to technical reasons, we are still gathering information on other acclaimed films left out of MIFF 2020,” said a press statement. The filmmakers said that they believed in democracy and fighting through constitutional means. They may plan on screening the films individually or collectively. “But they can crack down on a parallel festival too,” says Patwardhan.

Two letter of support from international filmmakers and former members of MIFF jury were also shared with the press. These are by Mark Achbar – Head of Jury, MIFF 2014 and Silver Conch winner MIFF 1994 for the film “Manufacturing Consent” (a film on Noam Chomsky) and Nicolas Philibert – Golden Conch Winner (In the Land of the Deaf) MIFF 1994 and Jury member, MIFF 2004. “It will be a dent on the reputation of the festival. International filmmakers may not come for a government controlled festival,” said Patwardhan.

The new series on Amazon Prime pads up a wafer-thin story with inanities and songs, and is a terrible test of the viewer’s patience Source Related

Art outside the museum

What makes art? Should it be always reactionary or political? What is the difference between conventional and contemporary spaces of art? At an intimate gathering of artists, connoisseurs and enthusiasts in ITC Grand Chola, these questions loomed large. In India: Art Today, an art conference organised by Apparao Galleries, spanning two days, the panelists led […]

Prints from the wild: Ministry of Mumbai’s Magic digital festival