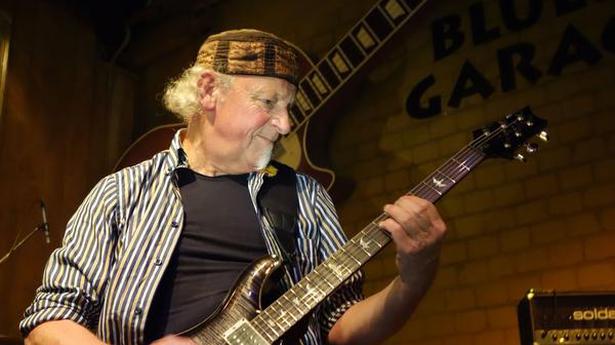 In July 2011, English guitarist Martin Lancelot Barre had to bid adieu to Jethro Tull, the British progressive rock band he had served for 43 years. The group’s frontman Ian Anderson had decided to opt for a solo career, using a set of younger musicians who had been accompanying him for a while.

Though Barre initially wondered what to do next, he too decided to focus on his solo work. The last few months have seen the release of two albums and on April 12, he commenced the American leg of his latest tour to celebrate 50 years of Jethro Tull.

From social media posts, it seems the response to his shows has been terrific. In a coup of sorts, Barre roped in drummer Clive Bunker and keyboardist Dee (formerly David) Palmer to his line-up. While Anderson is working on his next album and doing his own set of golden jubilee concerts, Barre will round up his tour with shows in some European cities and in the UK.

Now 72, Barre has always been one of the most underrated guitarists in classic rock. Those who admire Tull are big fans of his — and that forms a large number. Beyond that, there is little acknowledgement of his genius. Besides being overshadowed by Anderson’s showmanship and songwriting flair, he’s never been spoken of in the same vein as many other guitar contemporaries.

But check out his solos on ‘Aqualung’, ‘Thick As A Brick’, ‘Minstrel In The Gallery’ and ‘Dark Ages’, and much of his work on the 1970 album Benefit, and there’s enough evidence that he compares with the best.

Sadly, his solo albums have had a limited following, despite having some great portions. He began in 1992 with A Summer Band, a collection of live performances. In 1994, he’d just released A Trick Of Memory, when I interviewed him over the telephone. Extremely soft-spoken, he displayed a sharp sense of humour, and talked of his love for the movies and long-distance running. Subsequent solo albums have included Stage Left (2003), where he’s used an assortment of guitars and musical styles; and Back To Steel (2015), which has a complete Tull feel and yet its own individuality.

Barre’s 2018 studio album Roads Less Travelled uses styles as diverse as hard rock, progressive rock, folk and the blues. Stand-out tracks are the very Tull-like ‘Lone Wolf’, guitar-driven ‘Out Of Time’, the instrumental ‘Trinity’ and the bluesy ‘And The Band Played Only For Me’. Vocalists Dan Crisp, Becca Langford and Alex Hart have provided able support.

The other recent release is Live At The Factory Underground, a mix of adapted classics and solo numbers. Besides the standard ‘Minstrel In The Gallery’, ‘Aqualung’ and ‘Locomotive Breath’, it had interesting versions of Tull’s ‘Fat Man’ and ‘Love Story’, Robert Johnson’s ‘Crossroads’ and Blind Faith’s ‘Can’t Find My Way Home’.

Clearly, the man is still going strong. Anderson and Barre may be doing their own things, but both are proving they are never too old to rock ‘n’ roll.

Actor R Madhavan can’t help being a gushing father on social media after his son Vedaant continues to excel on the swimming scene constantly. Most recently, Vedaant won three gold medals and a silver medal at the Junior National Aquatic Championships 2019. Madhavan took to Instagram and Twitter to share a video and photos from […]

Deva interview: ‘Kushi’ proved that I could do more than just ‘gaana’