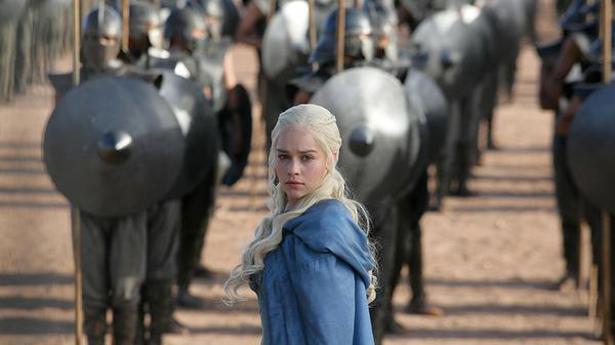 The fictional world of the popular TV series Game of Thrones may be reinforcing the existing racial, cultural and geographical stereotypes that have been part of the Western imagination of the East for centuries, a study suggests.

Game of Thrones — based on American author George R.R. Martin’s series A Song of Ice and Fire — has a reputation of being a ground-breaking portal of escape to an imaginary realm. However, Mr. Martin’s depiction of Eastern people is not far removed from older narratives, according to the study published in the Canadian Review of American Studies.

In his study, Mat Hardy, Senior Lecturer at Deakin University in Australia, cited examples from the storyline of Daenerys Targaryen, the heir to the Iron Throne — a white Westerner who navigates the perils of the Eastern lands to claim her birthright.

Westeros is the principal location for most plot arcs. To the East lies Essos, which is chiefly used as a kind of quarantine zone for the development of Daenerys’ story. It serves as a far-away land where she is relatively safe, while advancing her character arc.

To build her army, Daenerys frees thousands of dark-skinned slave soldiers known as the Unsullied, and wins over the Dothraki — a nomadic tribe of barbaric horsemen.

In the eighth and final season of the HBO series, the opening credits did away with the eastern continent of Essos and shifted focus to Westeros, as Mr. Hardy noted.

“The gathering of the Dothraki and Unsullied were major plot points for four seasons but they were about Daenerys’ development. Once she had these tools, she moved up a level of threat and leadership,” he said.

In the third episode of the final season of Game of Thrones, that aired last week, the Dothraki were presumably wiped out by the army of the dead.

“The death of the Dothraki fits a standard plot device in Western media: as strength testers. If you want to show how tough the bad guy is, you need him to slaughter a ton of good guys. Enter the non-white cannon fodder,” Mr. Hardy said.

In laying out their fantasy worlds, Western authors are inclined to reach for the same basic divisions that exist in the world.

“Inevitably to the north and west of these fictional maps lie snowy forests full of dour, uncomplicated, and noble warriors,” Mr. Hardy wrote in the study.

In the series, the northern stronghold of Winterfell is perenially cold.

According to Mr. Hardy, the Northern and Western peoples — such as the Starks — are portrayed as more honest, more productive, and generally more positive than their Eastern counterparts.

“To the east and south, there are deserts, steppes, and wastelands full of crafty nomads, duplicitous petty rulers, slavers, and evil magicians,” Mr. Hardy wrote.

Another example from the show is fair-skinned Arya Stark’s training in the Eastern city of Braavos. Mr. Hardy noted that this too is a reflection of how the West perceives Eastern martial arts in the real world.

“You pop off to a monastery for a few years and come back as a lethal dealer of death. It doesn’t even have to be explained to an audience. They just accept it,” he said.

Mr. Hardy, who teaches Middle East Studies, wants people to question their assumptions about the Middle East and its people. “Western fantasy authors are lazy when they draw up their maps and cultures and an endemic Euro-centric imagination prevails,” he added.

In the current lockdown situation, Facebook and Instagram have emerged the most go-to avenues for socialising. According to data collected by Instagram, in India, live views have increased by more than 60%. How do artistes who perform on these platforms feel about the whole arrangement? Does it make them nervous? Do they worry about ‘audiences’ […]

Hula hooping artiste to conduct a workshop in Covelong this weekend

Eshna Kutty’s luggage is a large round cloth bag. It’s filled with hoops of psychedelic hues — neon pink and orange, fluorescent yellow, bright green — in different sizes. “I can spin around 10 hoops at the same time, if they are of the same size,” says the hula hooper from Delhi, in town to […]

Praveen Kumar Sobti admits he is known more as Bheem from the Mahabharat series, than the track and field sportsperson he used to be Source Related