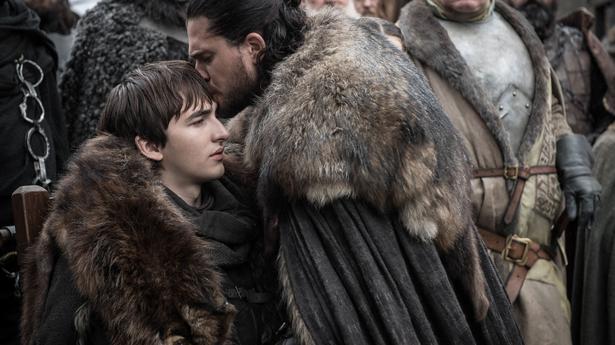 Game of Thrones is not just destined to have a bittersweet ending, it is designed to be a bittersweet experience, through and through. Being perennially shrouded in a darkness-dominant chiaroscuro, in an uneasy state of normalised morbidity, in a paradigm that is programmed to destroy everything which evokes endearment, the sets, scenes, and seasons of GoT have meticulously primed the viewer to expect — even embrace — the disconcerting. Nothing like the imminent annihilation of the Long Night to create and maintain a pall of doom over Winterfell, the human settlement turned military outpost turned ‘garrison of the living’. My only concern is that the first two episodes have already been one too many to keep lingering on the preamble to what should ideally have been an entire season’s worth of war.

Of course, the longer the preamble invests in getting us reinvested in the characters in this new apocalyptic context, the more satisfyingly intense the cinematic payoff when they die or survive. Already, we’re rooting for Arya Stark (Maisie Williams) and Gendry Baratheon (Joe Dempsie) to take their love into the “afterwards” that Bran Stark (Isaac Hempstead Wright) reminds us is still a distinct uncertainty. Meaning what exactly? That the characters may die or that the world as the characters know it would end? Does Bran even know the aftermath of the war or is his greensight subject to some sort of quantum indeterminacy? Who can tell with the Three-Eyed Raven these days?

The overall mood of this episode was not unlike the second half of Titanic. Once it has become clear that the ship is to sink, all that remains to do is eke out the last few drops of life through human commingling and song (Podrick Payne has a host of hidden talents, along with Daniel Portman’s singing voice). Thank god for Tormund Giantsbane (Kristofer Hivju) and his inborn sense of timing and delivery; his screen presence has provided the rare rays of levity in the thick air of fatality suffusing the show right now. The expression on Arya’s face has been flitting between cocky and coquettish this season; so, it’s good she’s got one of those motives out of the way.

Also bittersweet was the knighthood conferred on Brienne of Tarth (Gwendolyn Christie) in the most informally formal of ceremonies. Ok, she’s now a “Knight of the Seven Kingdoms”, and has attained the respect and recognition she’s always striven for, but why is she hailed as Ser Brienne as opposed to Dame Brienne? Seems like a brazen case of gender norms controlling nomenclature. Well, I guess Westerosi human civilisation would have to first make it to the Age of Electricity before it enters the post-modern era of non-patriarchal equality.

Jamie Lannister (Nikolaj Coster-Waldau) is fighting his own battles for absolution even ahead of the real war, seeking forgiveness and redemption from everyone he meets, wandering the lanes of Winterfell like it’s the site of his pilgrimage. In his defence, he has journeyed far, forsaking his lover and queen and safety, to fight for the sake of humanity with one hand. The kangaroo court at the Great Hall may have acquitted him, but he still has the decency to appear remorseful at every sight of Bran, the boy he crippled “for love”.

But the loneliest of them all has to be Daenerys Targaryen (Emilia Clarke). She’s in a strange land, among distrusting strangers, her authority as queen is thinning amid Sansa’s and Jon’s united front as decision-makers, she is finding it increasingly testing to continue trusting her own right-hand man, and then, it comes to her notice that the only raison d’être she’s ever had — claiming her birthright to the Iron Throne — was built on a lie. She has already taken a whole detour from pursuing her prime motive, simply on her beloved Aegon Targaryen’s (Kit Harington) behalf; now, she finds that’s not even his real name. The least Sansa Stark (Sophie Turner) could do is refrain from constantly looking daggers at Dany when all she’s trying to do is ingratiate herself to her would-be sister-in-law-or-some-relation-that-makes-sense.

The leitmotif in this episode is about the characters helping the viewer construct a clear definition of death, as represented by the Whitewalkers. For the assassin Arya (Maisie Williams), who’s trained to handle any threat unfazed, death is comprised by its variegated indeterminateness, her response to which is an eager open-mindedness: “I’ve seen Death; he’s got many faces. I look forward to seeing this one.” For Sam Tarly (John Bradley), the rationalist historian with a heart, death signifies a state of ‘forgottenness’, an erasure of historical record, of memory, and, therefore, of human identity. Which is why the Brans and the Tyrions must be protected

The Three-Eyed Raven confirms Sam’s take when he reveals that he, the repository of all the lands’ memory, is the actual target of the Night King’s destructive juggernaut. At this point, let me just lament how typical it is of GoT that its prime movers, Bran and the Night King, are also its most laconic characters. But what’s appealing is the idea that amid all the brutishness of the arms and ammunitions–fuelled physical battle building up around Winterfell, the key battle is going to be between a cripple and a non-human entity, and likely to be more mental or metaphysical. It should be interesting to see what shape a combat between the two would take — if the showrunners give us something as cheesy as the spiralling ballroom sway that Voldemort and Harry Potter perform in The Deathly Hallows II and title the final episode ‘Dance of Death’ or something, I’d go on hunger strike and urge you all to join me.

A life in music

The instrument veena has strings near-mimicking the human voice with a hoary tradition. It was this single Indian instrument that moulded three different schools — the Mysore, Thanjavur and Andhra baani (styles) — in Carnatic instrumental. It’s importance increased when iconic artistes such as Veena Seshanna and Veena Venkatagiriappa followed by Veena Doreswamy Iyengar received […]

‘Gangs of Madras’ tells the story from a woman’s point of view: CV Kumar

From producing experimental films to making his directorial début in Maayavan (2017), CV Kumar has come a long way. The director is now looking forward to the release of Gangs of Madras, his second directorial venture. When CV Kumar started scripting the film, he was clear about one thing — to make a raw, edgy […]

She was the product of a moment: John Guy on artist Y.G. Srimathi

John Guy, curator of the South & South East Asia section at New York’s Metropolitan Museum, was in Chennai recently to launch a book on Y.G. Srimathi, the Chennai-born artist who went on to make New York her home and who is now largely forgotten in India. The book, an extension of the retrospective that […]