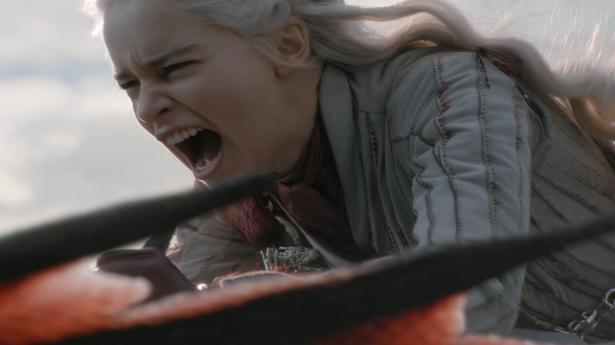 Methinks Game of Thrones has done enough with the theme of irrational, unbridled, senseless, arbitrary carnage. As exploring themes go, they’ve explored this one quite threadbare. After a point, terror-stricken screams, blood-curdling screeches, and roars of brutality can tend to become a little drab. On-screen chaos is very effective at keeping viewers clutching their pillows to their bosom. But only if they understand what it’s happening as a consequence of. For the most part of this episode, the viewer doesn’t know why anything is happening — somewhat like the poor souls of King’s Landing. The point where the violence turned into a numbing agent was where Daenerys Targaryen, in the best sense of the expression, flipped her lid.

Her dreams had already come true. She had ruthlessly nipped treachery in the bud, reasserted her dominance on her advisors, come to terms with her spurned-lover status like a boss, won everyone’s applause and approbation for her snazzy dragonback manoeuvres — she was evading flying projectiles like she had a PhD in aviation and carpet-bombing the enemy’s naval forces with clinical military precision. She had enforced a surrender and essentially won the war single-handedly, without a single casualty or unnecessary death. Give the awesome lady her crown already, viewers cheered into their screens. And without warning or cause, she proceeded to create a spectacle for them. Spectacle over substance really has been the show’s motto in recent times.

Dany’s character has been developed as someone who kills with discretion. She’s supposed to be a Targaryen with an innate sense of justice, fairness, and public good, who wishes to rule only to end tyranny (and because she believes it her destiny). The writers have tried to introduce a manic edge to Dany’s character this season, dropping her into insecurity and isolation and using that to stir her up into a state of hard-hearted mercilessness. But the point where they tipped her over the brink into cruelty still remains unconvincing — the viewer just didn’t have enough information about what came over her, about what might motivate her to gratuitously raze the streets of King’s Landing and kill all its innocent civilians, when she could have simply floated over to the Red Keep and fried Cersei Lannister (Lena Headey) on her balcony.

Perhaps the whole point was to depict how a single ill-considered petty decision from people at a height can set into motion a torrent of violence that tends to spiral horribly into utter madness for people on the ground. But you expect ill-considered petty choices from Cersei, and Dany is supposed to be her counterpoint. This is why you need writers to flesh out character motivations properly.

That said, maybe her motivations can be summed up by this rather nifty verse:

All she wanted was love.

She even told her lover how it could be found.

But she was scorned. So, she rose high above

And scorched the world below to the ground.

Ah, Cleganebowl. So typical of Game of Thrones to follow through on long-held fan demands so spectacularly and make a 300-esque apocalyptic show of it. Of all the deeply traumatised characters this show has given us, Sandor Clegane (Rory McCann) has been my favourite. Nothing as poetic as being fully aware that one is trapped in their own desire for vengeance, walking straight into its maw, expressing disgust at its grotesque face, and then diving into one’s phobia to end it all.

It’s rather cute to see Tyrion Lannister (Peter Dinklage) running around trying desperately to retain the humanity that his queen is so intent on shattering. Even Jon Snow (Kit Harington) has to shoot him a look of something like pity for his determined pacifism when the armies are facing each other. Dinklage’s arc has been hazy this season, as he continues to act stupidly rather than intelligently, belying his character description. But you can’t help but appreciate his presence on this show. Jon too — those shots focussing on his heavy breathing amid the muted surrounding bedlam are cinematic gold — remains a powerful cog helping to retain a sense of morality in a storyline hell-bent on undercutting it.

Playing Cersei Lannister has been the easiest gig Lena Headey can have wished for. All she has been doing all season is to plaster the mildest of smirks on her face that’s a mixture of “Ah, I love the fresh morning air of King’s Landing” and “Dragons bore me” and “All the single ladies…” Then again, it calls for so much dexterity to portray emotions ranging all the way from super-confident to petrified using the fewest of facial muscles. I’m not entirely sure she is out of our hair, although in this show the more of a villain you are the more anticlimactic your death is.

Speaking of anticlimax, it was confusing how unremarkably Jaime Lannister (Nikolaj Coster-Waldau) changed his mind about following Tyrion’s plan, bewildering how easily Arya Stark (Maisie Williams) agreed not to follow through on her regicidal vow (maybe she’s just pragmatic like that and knew she had to be the PoV character for the tracking shots through the ashen city), and downright perplexing why Cersei Lannister keeps lying about her baby’s father. The less said about Euron Greyjoy, the better. And maybe this is just something I’ve missed, but can someone please tell me how Ser Davos Seaworth has become a frontline swordsman when he has fingers missing?

Films are alternate realms. It is the distinct feel generated by shooting locations should you ever walk into one of them. Sample this: It is not uncommon to stumble into temple festivals (read: koil thiruvizha) in Chennai. But how often would you come across one where attendees look like they have been transplanted from the […]

Pack your own snacks — preferably home made. But make sure you have enough to share with about 40 other people. If you are running out of ideas on where to take your Tinder date, and bored with the packed club scene, check out Motojojo. An experiential platform, it aims to curate unique indoor and […]

First World War drama 1917 was the big winner at the BAFTAs on Sunday, picking up seven awards including best picture and director for Sam Mendes, the first time he has been honoured for direction by the British academy. The thrilling drama, shot in what appears to be a single take, was also honoured in […]