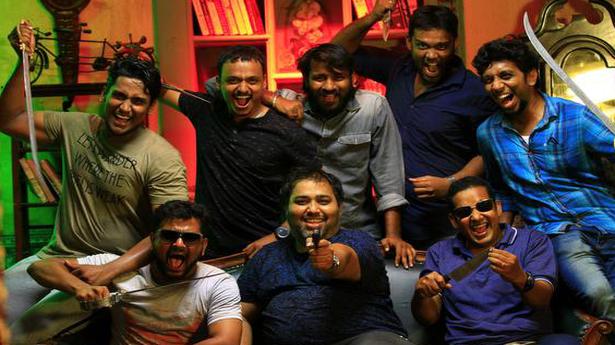 From producing experimental films to making his directorial début in Maayavan (2017), CV Kumar has come a long way. The director is now looking forward to the release of Gangs of Madras, his second directorial venture. When CV Kumar started scripting the film, he was clear about one thing — to make a raw, edgy gangster flick without any commercial compromises. Set against the backdrop of narcotics, the film, according to Kumar, tells the story of a husband and wife who get involved in the ugly world of the drug mafia. Excerpts from an interview:

Your production house has been credited for introducing a lot of young filmmakers into the industry. What made you get into direction?

Whether you’re a producer or music composer, you would still want to direct films some day. Over a period of time, I realised that I was more interested in direction. It just happened organically.

The gangster genre is quite popular among the masses. In terms of box-office figures, do you think that gangster films are more saleable?

The business side of it never mattered to me. But yes, I was very particular about making a gangster flick. That said, almost every Tamil film nowadays has some gangster connection. So, I was conscious about avoiding certain things at the scripting stage. When I conceived this idea, my only focus was to tell a compelling story.

Just like horror, the gangster genre operates mostly on the ‘rise of the underdog’ template. How different would you say Gangs of Madras is?

This is not limited to Tamil cinema alone. Every filmmaker is inspired by ideas. Which is why he/she shoots a particular scene in their own way. There’s always a reference point for your film, because you’re subconsciously influenced by the films you watch. In that sense, I wouldn’t lie that Gangs of Madras is something new. The approach I’m taking is all that matters.

We have come to a point where gender-reversal is automatically termed as ‘new-age’ cinema. Would you say that Gangs of Madras is a fresh attempt just because it has a female protagonist?

Definitely not. All of us share common emotions, irrespective of gender. You must have seen in Tamil films, where the son avenges his father’s death after 25 years. I never understood that logic. If that’s the case, why not tell the story from a woman’s point of view? We had about 150 auditions, after which, we narrowed on Priyanka Ruth.

One of the major criticisms for the gangster genre is the use of violence. Not many filmmakers are willing to show the brutality of the underworld in its true sense. How have you treated it?

I didn’t compromise on that part. Even if the Censor Board gives me an ‘A’ certificate, I’m fine with it. I haven’t toned down the violence because I wanted to retain the rawness of these characters.

There seems to be a deliberate effort from filmmakers to paint producers in a poor light in films. What are your thoughts?

Everyone is a capitalist in today’s world, but they’re pretending to be socialist (laughs). They want to project themselves as socialist when things happen to them. Normally, filmmakers would say that they are in the business of cinema just for art. But they’re the ones who charge ₹5 crore as remuneration. I don’t understand this hypocrisy.

Your directorial début Maayavan opened to mixed reviews. It was a high-concept film, but was diluted for the sake of the Tamil audience. What was your takeaway from that project?

It taught me a lot. Every film is a learning experience. To cater to Tamil audience, we had to tweak certain elements, which ultimately backfired. You have to accept criticisms and move forward.

In a vital addition to its ever-burgeoning vaults, the National Film Archive of India (NFAI) has acquire a treasure trove of cinema memorabilia belonging to still photographer and ace cameraman Mahendra Kumar, an associate of legendary filmmaker Ritwik Ghatak. Kumar, who passed away in 2016, was a close friend of the great director for nearly […]

Art should mess with reality: Stallone

Sylvester Stallone believes that the Rambo franchise tells a timeless tale. “There have been so many upheavals and civilisations have been destroyed. But it has been all about fighting back, not accepting defeat, rebuilding yourself and making a comeback,” the actor and director said at the Cannes festival on Friday. The fifth and last installment […]