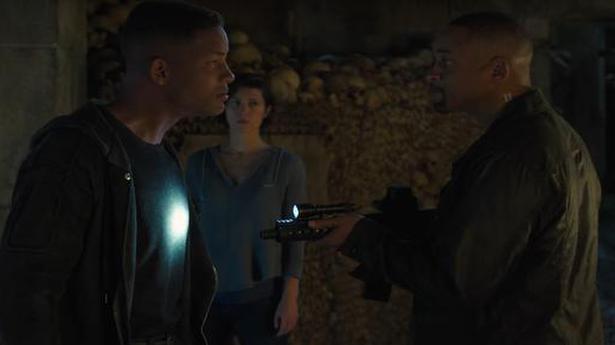 Not quite 65,000 years in the making, Gemini Man went through several actors, writers and producers in its 22-year development hell before landing in director Ang Lee and producer Jerry Bruckheimer’s corner. Will Smith, after being blue genie in Disney’s live action adaptation of Aladdin now plays 50-year-old government hitman, Henry Brogan, who decides to retire after a job nearly goes wrong. The suits will have none of that and rather than throw him a party and give him a watch they send a faster, meaner version of Henry to retire him permanently.

Beautifully shot, (Henry’s bonsais are very pretty, the views are eye popping and the motorcycle chase breath-taking) in Cartagena, Colombia and Budapest, Gemini Man moves smoothly along predictable lines. The de-aged Will Smith, Junior, is slightly distracting while the daddy issues and nature versus nature debates are broken down into bite-size psycho-babble. Incidentally Henry and Junior in the same frame bring to mind a certain archaeologist-adventurer with a fondness for a Fedora and bull whip (Harrison Ford was supposed to star in some iteration of the film). The third act unfortunately dissolves into mind numbing flash-bangs — one can almost imagine Bruckheimer chomping at the bit at the dreamy exposition.

Smith wears his 51 years lightly while Clive Owen as the wicked Clay Varris, the director of the Gemini programme — he wants to play god and create super-soldiers who feel no pain and never stop (where is the T-1000 when you need them) — looks like he is still suffering the headaches he did as The Professor in The Bourne Identity. Mary Elizabeth Winstead plays Danny Zakarweski, an operative who aligns herself with Henry once she realises the agency’s retirement policy.

With tighter writing and a not-so predictable plot, Gemini Man would have been a superb film instead of the middling one it is.

It’s possibly the last lunch together for a family in Abhiroop Basu’s Meal, as sounds of communal violence, through chants and news flashes, engulf their home. The frustration, sadness, trauma and bruises are visible on actors, Adil Hussain, Ratnabali Bhattacharjee and Arun Mukhopadhyay, in the 11-minute short film, which brings out both the fear and […]

For the love of Tamil cinema

A Tamil movie releases. You watch it on the first day — most likely, the first show. To upload on your YouTube channel, you record a video, wherein you talk about the movie: Whether it was good or bad, what worked, what didn’t, with cursory mentions of its music, cinematography, editing, and, sometimes, your notion […]

Avengers: Endgame has crossed the ₹300 crore box office mark in India, becoming the first Hollywood film to achieve the benchmark in the country. According to a statement issued on behalf of the makers, the Marvel Studios film has collected a whopping ₹372.56 crore (gross box office collection) and ₹312.95 crore (net box office collection) […]