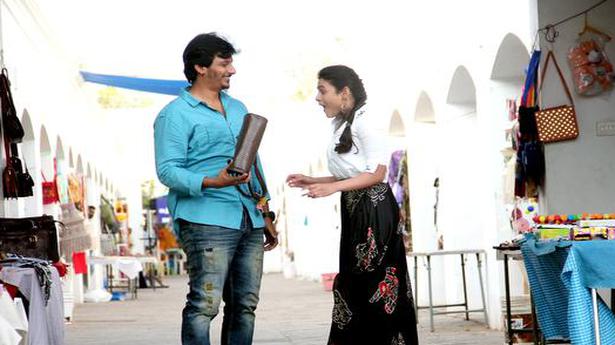 The Government better take immediate steps to solve the farmers’ crisis in the country. If it doesn’t, chances are Tamil cinema will make a hundred more films on it, and we, the audience, will be forced to sit through them.

The minute Gorilla, which positioned itself as a comical heist film, goes all serious and takes on a serious issue, it dives downwards to a depth from which it struggles to recover. The story revolves around Jeeva (Jiiva) and his group of friends (which includes a chimpanzee) who plan to rob a bank to solve their financial issues. They have a friend to help them out in this task – a chimpanzee (Kong) that they once saved from a forest (told through CG in the opening credits).

The group thinks that watching heist English films is enough to gather material to rob a bank. They choose a bank near Vandalur (I wondered if Kong would wander into the zoological park nearby), and break in wearing gorilla masks and take the customers hostage.

All this happens after a good half hour of dialogues has been passed off as comedy, a love track that has no flavour; Arjun Reddy fame Shalini Pandey debuts in a full-fledged role in Tamil, and has very little to do here. Even all this pointless fare is excusable, but not the way Gorilla starts taking itself too seriously and launches into a discourse on the importance of farmers to the Indian economy.

The laziness in the writing of Gorilla shows. Not only did director Don Sandy and team forget to weave an engaging screenplay over a one-liner that could have actually resulted in a comedy of errors, they also seem to have shown the least interest in perking up the bank sequences. Some things are irreverent – in a good way – like the room that the four reside in (it has pictures of directors Sundar C and Venkat Prabhu!). Yogi Babu shows up in a couple of scenes as a small-time thief and tries to liven up things, but Gorilla left us feeling a bit like we were caught in the cage that the animal was found in.

This is an embarrassingly obvious thing to say, but some very exciting scenes — in thrillers or action films — have involved speeding vehicles. Just off the top of my head, there’s the brilliant night-time sequence in Hitchcock’s North by Northwest (1959) where a heavily drunk Cary Grant struggles to control his car after escaping […]

Known for creating various reality shows and speaking his mind, Raghu Ram of the Raghu-Rajeev duo says it is reality shows that can bring change in the content on the web. Best remembered for “Roadies”, he will be seen in the Amazon Prime’s new reality show “Skulls and Roses”. Featuring a bunch of youngsters on […]

With ‘Sufiyum Sujathayum’ releasing on Amazon Prime, Malayalam cinema is in for a change of scene

The film, starring Jayasurya and Aditi Rao Hydari, is set to release next month on the streaming platform Source Related