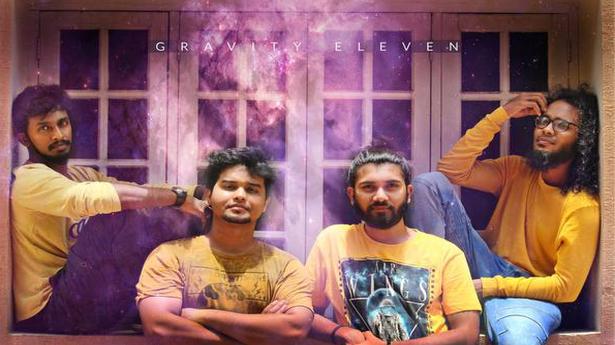 You are most likely to spot Gravity Eleven playing at least five evenings a week at one of theleading clubs or watering holes in the city. Ask members of this two-year-old four-piece band what makes them stand out and their unanimous reply is “Our lead singer’s vocals!”

Kalyan Das, the lead singer, himself is shy but well aware of his vocal prowess. Yet he travels as far as 70 kilometreson weekends to train himself. Unlike the band’s self-taught guitarist John Bodapati, Kalyan wanted to learn the nuances of music and enrolled for Hindustani classes. “I was a bathroom singer; I must have been a good bathroom singer otherwise I wouldn’t have earned applause when I was humming a song with my eyes closed to kill boredom at school. When I found a big group had gathered around me and praised my voice, I felt flattered,” recalls Kalyan. Since that impromptu debut, Kalyan graduated to singing on stage.

When not together, the boys are busy with their respective jobs and honing their individual musical skills. “Whenever we’re free, even if only for a short while, we jam. This is our time to bond and ensure we are on the same track musically,” says John.

Sharing the story of how Gravity Eleven was formed, the boys say, “It was all because of Richard, our lead guitarist.” Richard Lazarus was Kalyan’s colleague and heard of his love for singing from colleagues. Apparently it doesn’t take much time for Kalyan to break into a song, even on the floor in office. “Richard met me and we began performing together now and then. He was friends with our drummer Sudeep Samuel and John,” says Kalyan.

One meeting led to the other and the four realised their interest in music could make for a good team. “We wanted to be different from the rest. Bollywood rock was what we decided to go with because we have a fantastic vocalist,” says Samuel, the drummer. Incidentally, he learnt to play the drums from his father

Talking about the crowd’s choices, the band feels there is nothing that the crowd don’t want to listen to. “It all depends on how one presents it. We play a ‘Pehla Nasha’ track from Jo Jeeta Wohi Sikander even now. Each time we play it, the crowd cheers. We do play a lot of classic rock as well. Music is ageless, the tracks we play and the reactions we get are proof of that,” says Samuel .

Despite their consensus on the kind of music they play as a band, , their own choice of music on their personal devices vary. “I love metal music, it is therapeutic,” says Samuel. John and Kalyan love to disagree and demand ‘How’? The lively chatter goes on as we move away.

This space turns the spotlight on homegrown bands

Demystifying the magic of theatre

In the play, Colors of Trans 2.0, when the transgender performer Living Smile Vidya bares her surgically reconfigured body in a moment of aching vulnerability, it induces gasps from onlookers accustomed only to cis experiences. In Jhalkari, when the Rani of Jhansi (Dipika Pandey) comes across her doppelgänger, she instantly drops her regal guard and […]

Achal Mishra’s debut turns the lens on his ancestral home to build a portrait of changing times, nostalgia and an assertion of old values Source Related

Sree Vishnu: I was never a topper

Sree Vishnu is a favourite with all newbie directors. All the directors who worked with him made news with their interesting films, be it Kishore Tirumala, Pavan Sadhineni, Sagar Chandra and now Vivek Atreya with the forthcoming Brochevarevarura. Vivek had earlier directed Vishnu in Mental Madhilo. Set against a college backdrop Brochevarevarura, Vishnu says, is […]