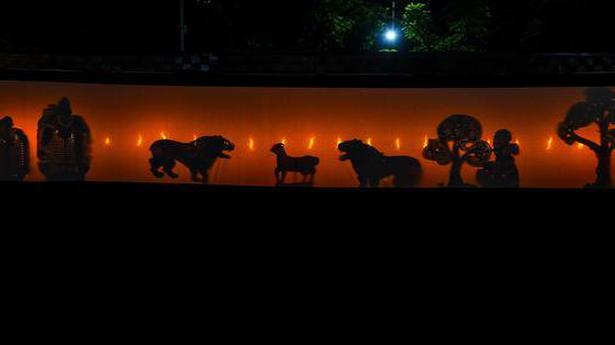 The aayapudava (goddess’ attire) is stretched taut in all its glory, as 21 lamps in coconut shells are lit one by one behind it. Spots of golden slowly take form behind the translucent white cloth, which soon basks in a soft yellow glow. Now, one is also aware of the motionless silhouettes of puppets punched with tiny holes.

Before long, they too come alive, to narrate stories from Kamba Ramayanam — episodes that depict Rama’s birth, his childhood and coronation slowly unfurl.

Tholpavakoothu, a traditional form of shadow puppetry predominantly practised in temples across the Palakkad, Thrissur and Malappuram districts of Kerala, has begun to take over contemporary spaces of performance. Chennai’s Phoenix MarketCity was witness to one such performance, led by Vipin Vishwanatha Pulavar and his team of 10 artistes, recently.

Vipin is a 15th generation practitioner of this artform, which traditionally used to be performed solely in Bhagavathi temples to please the Mother Goddess. Over phone, he takes me through a family legacy that was redefined by his grandfather Krishnankutty Pulavar, a renowned puppeteer and one of the early patrons of Tholpavakoothu. “The legend goes that (goddess) Bhagavathi expressed her wish to see The Ramayana, to Lord Shiva, who then arranged for it to be performed through shadow puppetry. This incident is believed to have been the beginning of it all,” speaks Vipin. The 18th Century art form still demands reverence as a ritualistic performance in these parts of Kerala — around 105 temples in the State host performances regularly.

The artiste, whose team is based in Koonathara, a hamlet between Shornur and Ottapalam, continues, “Earlier there used to be at least 30 families devoted to tholpavakoothu. This has now , come down to a figure that can be counted on fingertips.”

Usually performed for seven, 14, 21 or 72 days between the months of January and May, each play originally spanned from 10 pm to 5 am in the early days. Temple performances were done in ‘Koothumadam’, a specially constructed oblong playhouse within the premises. These factors also served as the reason why tholpavakoothu was restricted to a niche audience, till the 1940s.

“My grandfather can be credited with bringing in a lot of changes to this situation — he wanted more people to be aware of this form of art. He started with compressing the content to fit it into a short format — roughly of about one-and-a-half hours. He also worked against the idea that women are not to enter temple premises or be involved with puppetry in anyway. It was after he came in, that women started being trained to make puppets,” explains Vipin. He adds that even today, very few women are involved in performance and manipulating the puppets.

Krishnankutty Pulavar also encouraged his family and successors to bring the form to venues outside. This drastic step was met with a lot of criticism initially. But the artiste stuck through and before long the team under his captainship started travelling to different countries — they have performed in around 30 countries till date.

What’s in a name?

It was when they started travelling that they realised that more people should be involved in puppet making, and the puppets that they travel with get destroyed easily. “So, my grandfather trained many young men and women in the craft. My mother is the person who handles puppets for us. Even though we don’t need any more, she keeps making them for leisure. She enjoys doing that,” Vipin continues.

Tholpavakoothu uses leather puppets ( earlier, they were made of deerskin); ‘thol’ literally translates to skin in English. Figures are draw on the material which are later cut out, and embellished with dots using fine chisels.

Nowadays, young women also accompany the team to learn manipulation and performance. This, according to the artiste, is a positive shift towards more visibility and awareness, though financially, it is still a struggle to sustain only through puppetry. But contemporising the artform once rooted in traditional beliefs, has definitely attracted more audiences from different parts of the world.

“The idea is to make it accessible and thereby protect it from disappearing, like many such artforms before tholpavakoothu have,” concludes Vipin.

People want to get out of their homes and watch new movies, says Sanjeev Kumar Bijli of PVR Cinemas

The Joint Managing Director of PVR Ltd, talks about the extensive safety measures that have been conceived and put in place, to safely resume playing movies again after the pandemic Source Related

When news first trickled in that director Harish Shankar was remaking the 2014 Tamil film Jigarthanda in Telugu as Valmiki and that Varun Tej has been roped in to reprise Bobby Simha’s character, there was curiosity as to how the gangster drama would be reworked and how Varun would step into Bobby’s shoes. Varun’s recent […]

I am not cut out for franchise films, says Danny Boyle

Filmmaker Danny Boyle, who made headlines last year over his departure from ‘Bond 25’, says the key takeaway from the experience is the realisation that he is not “cut out” for franchise cinema. The Oscar-winning filmmaker had in August last year dropped out of the project along with his frequent collaborator, screenwriter John Hodge, over […]