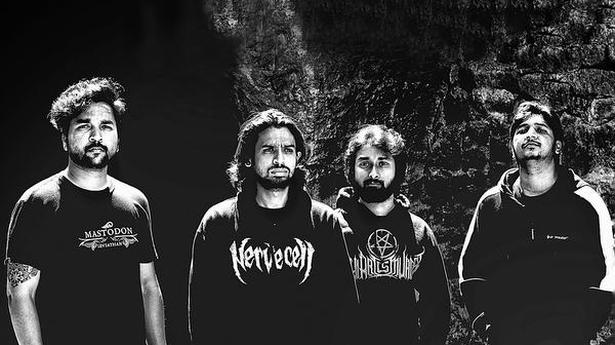 Over the weekend, Aggressive Tendencies — a heavy metal music showcase at The Moonshine Project in Film Nagar — had its twelfth edition. One of the acts was by long-established city band Hostilian who lean towards experimental groove metal.

The band comprises quite a few members: Sagar Iyer on vocals, Ven Thangaraj, Roshan Mudunuru and Neil Joshua on guitars, Kenneth Moses on bass, and Rajiv Kumar on the drums.

A love for originals

Rajiv, one of the band’s founding members and one of the original members of metal band Skript, recalls the pre-conception days in 2016 of Hostilian. By then, he had been playing for almost 13 years and was looking to form a band. In late 2015, he was contacted by Ven who was travelling continually between Boston and Hyderabad for work, but still craved the occasional jam session.

From that point on, they decided they wanted more people in these sessions and also to pursue original music rather than covers.

Kenneth and Roshan hopped on board and the songwriting experience kicked off… but they needed a vocalist. A Facebook post created on a whim invited a message from Sagar; that completed the group.

Rajiv has held the value of metal close to his heart since he was about 13 years old, when he went to a gig at which his brother was playing. His days as student at Hyderabad Public School saw encouragement from his music teacher who helped embrace a growing love for rock music.

Fast forward to Hostilian’s formation, Rajiv says the syncing of everyone’s energies was interesting. “It was understood that we all wanted to do something a bit more modern and edgy. We’ve released two EPs with four songs in each, the most recent release Catalyst being this January. We’ve written a couple of songs now (which we played at the recent Aggressive Tendencies).”

It is understood that original music has been a priority for Hostilian from the get-go, and when they first started, there weren’t many original music bands. “You stop thinking about the kind of music you want to want to write, because it eventually comes out without much thought… you can’t describe it. We don’t force ourselves to sit and write. That’s also a USP of metal music. On-stage, there’s not much room for improvisation either because the instruments are tightly packed. With metal music, you’ll also find the musicians writing their own songs always, unlike pop music, so that’s why it comes out more mind-altering.”

Thirteen years is no joke in the city’s metal music scene and Rajiv has seen the support for genre evolve over time. “The secret to longevity? I didn’t think of this as a career but it wasn’t just a hobby. We’ve seen many venues come and go but there are very few venues which really provide support. Right now there is only The Moonshine Project. And bands-wise, there are so many new faces. In Hyderabad, there’s a core audience who’ve listened through 10 to 15 years, and they spread word organically.”

Hostilian’s goals have definitely changed through its journey so far. “You start off small and there’s this idea to play in as many cities across the country as possible, especially in live settings. And you’ve got to keep it fresh and head-banging-worthy.” That said, Rajiv and bandmates find it amusing how metal musicians get a bad rap today. “It’s angry music for happy people, I guess! We are more in touch with our emotions than most.”

Hostilian, like most bands, have their idols. Rajiv mentions Marco Minneman from The Aristocrat, Mario François Duplantier from Gojira, while vocalist Sagar says Travis Ryan from Cattle Decapitation.

This space turns the spotlight on home-grown bands

Director of Art and Culture S. Ganessin dies after a heart attack in Puducherry

Director of Art and Culture S. Ganessin, 58, passed away following a massive heart attack here late on Saturday night. According to a senior official, his family found him lying unconscious around 5 a.m. on Sunday. He was immediately rushed to the Indira Gandhi Government General Hospital where he was declared brought dead. He is […]

Warwick Johnson-Cadwell of ‘Samurai Jack’ fame on his latest work

Spaceships. Specifically, spaceships shooting at each other. And fire. That is what celebrated UK-based comic book artist Warwick Johnson-Cadwell remembers drawing as a young boy. “I always drew. It was the easy way to play. I didn’t have to worry about asking my parents to buy me spaceships… well, I asked them to buy as […]

Of course, balcony antakshari is fun. But, just like in a karaoke bar, there comes a breaking point. And for your neighbour, it may just be caused by your 12th performance of Prince’s ‘Purple Rain’. Fortunately, this weekend, you can sit back and let the professionals take over. With Covid shutting down live concerts and […]