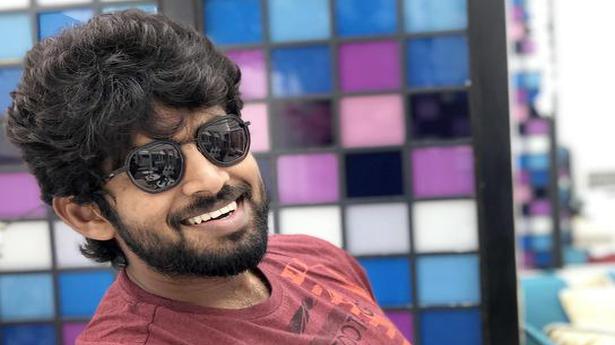 Kathir got into the film industry for one person: his father, Logu. “He wanted to see me on the big screen and I débuted as an actor, with zero experience in acting,” he recalls about 2013’s Madha Yaanai Koottam.

That was six years ago, when Kathir had given exams to go to Canada and dreamt of pursuing an import-export business. Today, seven films later, Kathir has already bagged one of the biggest Tamil films of the year: the Vijay-starrer Bigil, that’s releasing today.

The 28-year-old makes little effort to hide his happiness — it’s a film that releases for the Deepavali season, something that he’s stoked about. “That a film I feature in is releasing on Deepavali day is exciting. That it stars Vijay, an actor I adore, is extra special.”

Kathir cannot forget the day he got this offer. He got a call from Atlee, with whom he is good friends with, asking him to meet him. “He (Atlee) teasingly said: ‘Sir, are you busy? Please listen to my story and if you like it, take it up’,” laughs Kathir.

He was ready to take it up, but Atlee insisted he think about it for two days. “Even if it was a small role and required only five to six days shoot, I would have obviously taken it, considering that it was a Vijay film. I don’t know why, but I adore him (Vijay). I have known him for the past few years, and I accepted Bigil because it gave me the opportunity to spend time with him,” says Kathir, who is a big fan of Ghilli and Sachein, having watched them multiple times.

It helped that he was entering Bigil, a film that has a generous dose of football sequences, just after shooting Jada, another football-based flick. So, what’s with him and football? “I really don’t know,” he shrugs off, “I’m more of a basketball player; I have played it during my school days. But I guess now, if you call me for a game of football, I can manage.”

If 2019 is the year that saw him go to the next level in terms of popularity, 2018 was when we saw Kathir in the critically-acclaimed Pariyerum Perumal that has garnered quite a lot of praise. “It was a script I went after. A friend of mine had suggested it, and I called up Mari Selvaraj, and we had a meeting immediately after to fix it up. I knew it will be among the ‘best films list’ because it spoke about a lot of things.”

Kathir had not experienced the caste-based issues Pariyan faced in the film, but the more he kept talking to its director Mari Selvaraj, the more he got interested in the character. “It made a huge impact on me, and that helped my performance.” So, personally, what was the toughest sequence? “The pre-climax sequence where I sit and talk to the girl’s father. I felt I did complete justice to that scene, and that the audience would accept it.”

The Vijays in Kathir’s life are not restricted to Ilayathalapathy alone — there’s Vijay Sethupathi as well. They shared screen space in the superhit Vikram Vedha, an experience Kathir will not forget easily. “My film ideology changed after interacting with Sethu anna (Vijay Sethupathi). How he improvises on set is something I have picked up.”

Kathir believes that anyone can become an actor if they put in some effort. “I would encourage all acting aspirants to try their hand at it. But how far they go in the industry is dependent on several factors, including luck and being at the right place at the right time.”

Up next he has Jada, the first look of which featured him as a footballer. “It’s not a 100% sports film,” he clarifies, “It revolves around ‘sevens’, a local street form of football. When the trailer releases, you’ll see this film in a different colour.” Then, there’s Sarbath, a comedy in which he shares screen space with Soori. “We completed the film in a 30-day schedule, and I got to spend a lot of time with Soori.”

He recalls the gruelling time during one schedule of Sarbath in Dindigul, which clashed with his shoot of Bigil in Chennai. “Those seven days,” he shudders, “I can never forget. Every day, I would finish the day shoot of Sarbath, start at 4.30 pm, drive to Madurai airport, catch a flight to Chennai and head straight to the EVP sets for the night shoot of Bigil. That would go on till 4 in the morning, after which I would head straight to the airport to fly to Madurai. The only sleep I could manage was during the flight time.” When he shared this with Vijay during a conversation, the latter was surprised with his commitment. “‘Super pa, I thought it would be hard for you to do this every day, but you managed’,” he said, “I was thrilled to hear that.”

Atlee, ‘Bigil’s director, reportedly described Kathir as ‘Kollywood’s Vijay Deverakonda’. But Kathir himself is not thinking so much — even as he awaits the release of his big film, all he’s looking forward to is giving the audience variety. “I think the audience come to my films because they expect the content to be different. I will keep striving towards that.”

‘I only understand the road that involves unity’

Contrary to what pop culture experts on the Internet will have us believe, Avengers: Endgame will not be shot from purple supervillain Thanos’ point of view. That’s all that I manage wrangle out of Joe Russo during our brief eight-minute chat. He did confirm what we know already: the film will focus on the original […]

Shelton had become the leading voice of the new American independent cinema movement, causing waves with her low-budget films and work on television Source Related

Madras Day 2019: Once Upon a Time…in Kollywood

The year is 1980. It’s yet another day in the lives of film buffs Kamal Haasan, Santhana Bharathi, PC Sreeram and Mani Ratnam. They gather at Samco Hotel’s roof-top in Alwarpet, for an evening of tea and conversation. All of them are in their teens and have a common love for ‘good’ cinema. Apart from […]