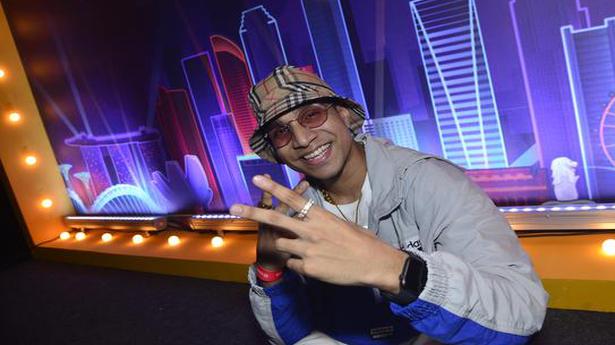 During Singapore Tourism Board’s (STB) Bengaluru leg of a multi-city tour in India — that also included New Delhi, Mumbai, Chennai — its Regional Director for India, Middle East and South Asia, GB Srithar says the tour’s chief purpose is “to change Singapore’s perception as just a family vacation place… We also want to make it the party capital of South-East Asia.” For this, STB roped in one of the country’s rising rap sensations, Yung Raja, whose music video for Sony Music, ‘Mustafa’, has over a million and a half views on YouTube.

If, for Singapore, the tour was an opportunity to redefine its identity; then, for Raja, it was to celebrate his. For, India is where his roots lie.

In 1992, his father, a Chemistry professor in Thanjavur, left for Singapore seeking a better livelihood. Three years later, Raja was born. The music and the movies that he listened and watched in his early years were Tamil.

“Padayappa (starring Rajinikanth) is my first film. At least, that’s the first time I remember watching and falling in love with the charisma of an artiste in front of a camera. People were screaming and celebrating him. I was four or five years old then. I remember telling my dad that I want to be like Rajinikanth,” he says.

Raja struggles in his search for words to describe his attraction towards his favourite star. When he finally finds them, after a brief pause, you can understand why Rajinikanth is such a big influence in his life. “It’s about how people of different cultures, races, generations love him. I mean, the man has fans in Japan! It’s also about what he represents. He represents spirituality, he’s about respect, he represents his people. I think I knew very early on that is how I wanted to be when I grew up.”

Within home, for Raja, it was Rajinikanth, AR Rahman, Ilayaraja, dosa, veshti and other typically Tamil things. But once he steps out of home, he becomes an “English-speaking Singaporean”.

“I have had this 50:50 thing all my life,” he says. But the two worlds he was traversing didn’t clash; they coalesced within him, exposing him to new things, of which hip-hop music was one.

“I made friends from different races, different cultures… And, that’s when I encountered Will Smith for the first time.” If it was Rajinikanth in the East, Will Smith was Raja’s biggest inspiration from the West — he wanted to emulate his looks, his physique and his music.

Raja, in his teens, wanting to be like Rajini, started acting. He was in ads, a TV series and a few movies. But his friend and fellow Singaporean rapper Fariz Jabba suggested he try music. “He told me I can be my own in rapping and not just another actor from commercials who nobody remembers.”

Through music, Raja says, he found himself. “I had always felt a bit uncomfortable to be myself. I don’t know why but that’s how it was for most part of my life. So, music gave me that fulfilment… I could be myself. That’s when I figured out this is my thing.”

And, according to Raja, hip-hop music is “identity-driven”. “When it comes to other genres, it’s enough if you are talented. You can probably have a team around you, who will craft you as an artiste. But hip-hop is the truth of who you are.”

Raja’s singles, ‘Poori Gang’ and ‘Mustafa’, explain his views on hip-hop as an identity-driven genre. Both have Tamil words liberally interspersed with English. Sample: ‘All my makkals wanna see me; I’m the Puthu Thalaiva (from ‘Mustafa’).

“I can’t be making full English songs. That’s not who I am. So, this mixing of words was the natural thing for me to do.”

Mustafa is Raja’s hat tip to an eponymous shopping mall he has been frequenting since he was a child. But it’s more than that. “That place has everything you want,” he says, “It’s a 24/7 place. It never closes. And, it was founded by an Indian family. Now, they are one of the most successful Indian families in Singapore. So, I want to be the same: give people everything they want and never run out of business.”

In the last few years, at least a couple production houses have resisted the need to get just the combinations right — the Kodambakkam way of getting well-known names together — for success. Production houses such as S. Sashikanth’s YNOT Studios (Irudhi Sutru and Vikram Vedha) and S.R. Prabbu’s Dream Warrior Pictures (Theeran Adhigaram Ondru […]

Over the past decade, Pandit M. Venkateshkumar has established himself as one of the country’s most-admired Hindustani classical vocalists. Earlier, the 66-year-old musician concentrated on performing in his home state of Karnataka, and besides khayal, was known for his renditions of spiritual Kannada vachanas and dasara padas. “I had a regular teaching job at the […]

Water gushes and thunders down rocks as Pt. Bhimsen Joshi in his distinct baritone sings ‘Mile sur mera tumhara’. The clear, vibrant beats of the tabla in the background match the rhythm of the water ripples. In his characteristic manner, the maestro expresses as much with his hands as his voice. He looks up at […]