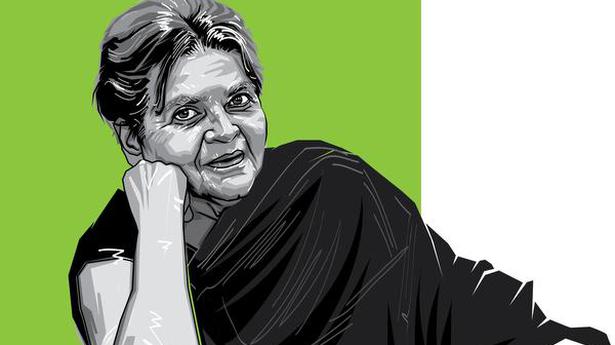 Six feature films over the course of three decades — it’s a phenomenal achievement. “I have made any number of documentaries, television programmes, plays, and I have written all of this. So, don’t discount my writing. Everything I have produced or directed was first written by me. So, I am a writer first. So, then six is phenomenal,” says Sai Paranjpye, who is in Goa for a retrospective of her films organised by the Cinephile Club of the Entertainment Society of Goa (ESG), to celebrate International Women’s Day. She adds, “I always like to maintain that I am a writer first and then a director. But unfortunately, I am not known as much as a writer. I am a first-class writer and a second-class director.”

Paranjpye’s first feature film was Sparsh (1980), in which the visually impaired principal of a school for the blind, played by Naseeruddin Shah, falls in love with a sighted teacher played by Shabana Azmi.

Once, Paranjpye wouldn’t have thought to tackle such a topic, as she considered it too sensitive and felt a certain pity for the blind — but that changed one day.

“It was when I was working for Delhi Doordarshan and my director said, ‘Sai, World Handicap Day is just around the corner, so go to the Blind Relief Association and do an eight-minute news clip or a documentary.’ I objected, saying I couldn’t see them, but when I went there I realised I was being sentimental without any reason. (My emotion) was very facile and almost fake. Because they don’t need my pity. They are wonderful, having a great time, and they are independent.”

She adds that Shah’s character was based on the real principal of the school she visited. “He shattered my preconceived ideas about blind people. He was confident, dynamic, very positive and intelligent; I said, ‘Wow!’ He remained in my mind.”

The film bagged three National Awards — Best Feature Film in Hindi, Best Screenplay (for Paranjpye) and Best Actor (Shah). It’s interesting to note, however, that Paranjpye initially had Sanjeev Kumar and Tanuja in mind for the lead roles rather than Shah and Azmi. “When I wrote the screenplay I had them in my mind.” But this failed to materialise as Kumar was unwilling to work with Sparsh’s producer, Basu Bhattacharya, due to financial issues.

And then someone suggested Shah, who like Paranjpye was an alumnus of the National School of Drama. But Tanuja and Shah didn’t work as a pair, it was felt, so Paranjpye approached Azmi. “I took the coward’s way out as I didn’t inform Tanuja. But, when I met her in Mumbai after the movie had become successful and won awards, Tanuja said, ‘Our film received an award.’ It was not sarcastic — it was genuine.”

A matter of luck

Two more hits followed hot on the heels of the debut: Chasme Buddoor (1981) — Paranjpye’s most successful film — and Katha (1983); all this was “quite a matter of luck,” she says. “I met the producer of Chasme Buddoor, Gul Anand, at the screening of Sparsh. He loved it. He said he would love to make a film with me but it must be a comedy. And fortunately I had a teleplay ready: Dhuan Dhuan, which would become Chasme Buddoor. After the major success of Chasme Buddoor, I got many film proposals. But many producers wanted me to work for peanuts, maybe because I was a woman or maybe because I had no business sense, I don’t know. So I started refusing. And then Suresh Jindal took on Katha. But in between, I kept doing theatre, plays in English, Marathi, Hindi, TV serials. I haven’t planned my career as such.” Katha provided occasion for amusement. The film was shot in a real chawl in Pune where the residents opened their homes for the filming. As a token of gratitude, Paranjpye organised a special screening for them. “The screening was a major disaster,” says Paranjpye. “It was not the regular screening one expects. The entire chawl was so excited at seeing their house or their belongings on screen that they didn’t really see the film at all. A whole commentary was going on all the time, but they enjoyed the film in their own way.”

Most of Paranjpye’s films feature strong female characters. “It was natural for me to write such characters,” she says but also laments the fate of her 1993 film Choodiyan:“It was a socially relevant docu-drama that the Films Division commissioned me to do. It was about a group of women from a village near Pune, who ganged up to wipe out alcoholism. The theme was real but it was dressed up in my own way. However, the film was not released. It won the National Award [for Best Film on Social Issues] and then it was canned and never saw the light of day.”

It’s one of Paranjpye’s lesser-known films that is her favourite: Disha (1990), starring Shabana Azmi, Nana Patekar and Om Puri. It made a strong comment on migration and the forces that drive poor farmers to megacities like Mumbai. “All these films addressed the needs of that time. I am so delighted and gratified that they live on today and people still think and say good things about them.”

Starting out as a radio announcer in Pune, Paranjpye had quite a varied career across different media. She cites her “gypsy nature” and the influence of various places — such as Australia, where she spent part of her childhood — as possible reasons. But one influence she loves to recollect is her uncle, the filmmaker Achyut Ranade. He would narrate the stories of Hollywood movies, fulsome with visual detail, during their evening walks on a hilltop in Pune when she was a child. “I was fascinated with this narration. I think my love for direction started from there.”

“I am on the last chapter, which speaks about my movie Saaz (1997). Also, my latest script is ready. Incidentally, it is based in Goa and is called Xapai (the Portuguese word for ‘grandfather’). But I am not getting any financiers for it.”

The Goa-based freelancer writes on art, culture and ecology.

An aesthetic and moral manifesto

A theatre production that has been gathering buzz over recent weeks is Riḥla from the Aagaaz Theatre Trust. Directed by Neel Chaudhuri, the play is adapted from Andreas Flourakis’ I Want A Country. The Greek playwright calls his work an ‘open text’, which essentially means that it is left up to those who interact with […]

From Rihanna to Baby Yoda: This cosplayer morphs into famous faces during lockdown

Medha Srivastava is no stranger to headlines across the geekdom. Her cosplay as video game Dota 2’s Legion Commander for Comic Con India 2020, earned her the ‘Fan Favourite’ title from judges. Comic conventions aside, concept artist and illustrator Medha is one of millions of creatives trying to make the most of the lockdown. What […]

Theatre director Quasar Thakore Padamsee read A Peasant of El Salvador written by Peter Gould and Stephen Stearns, a few years ago. The play narrates the story of a hill farmer and his family during the 1970s, amid the Salvadoran civil unrest. The peasant has a small piece of land, a large heart and a […]