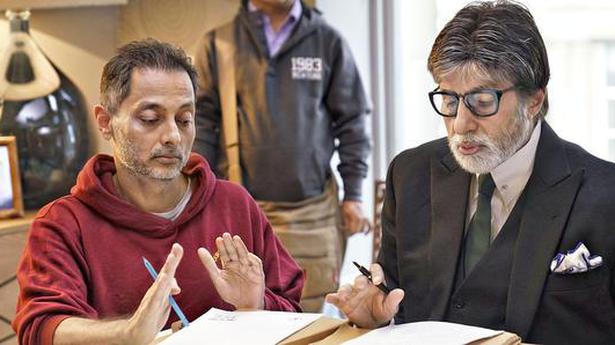 Even as we were about to sit down for our interview, director Sujoy Ghosh and his lead actor, Taapsee Pannu couldn’t stop joking and ribbing each other. From Ghosh’s unintentionally or intentionally worn out T-shirt which Pannu made fun of, to the director blaming her for not ever gifting him even a single wearable shirt, despite her fame and wealth. Credited by Pannu for his jocular personality and setting a constant standard for high energy on set, Ghosh set praise aside, and humbly said, “It’s important for everyone to have a good time on set.”

Ghosh like Badla’s lead actor, Pannu is not a product of a film school. When asked if donning multiple hats of writer-director-producer-actor is a way of learning on the job, he retorted that he is at an age where he “Can’t [afford to] learn anymore, but only survive”. The filmmaker believes that writing is the only thing that comes naturally to him. Calling himself a disastrous actor, he’s vowed to never act again after playing the role of Bengali sleuth Byomkesh Bakshi in the 2013 film, Satyanweshi directed by Rituparno Ghosh.

Of late, Ghosh has left behind a consistent trail of suspense-thrillers in his filmography (Kahaani, Kahaani 2, Ahalya), but almost everyone asking him about this shift to a preferred genre annoys the director. Ghosh’s debut was Jhankaar Beats, and he previously made an ill-fated adaption of Aladdin with Amitabh Bachchan. For him, rather than the safety of a particular genre, it is more about the choice of stories, or better: a way of telling that he has been consistently drawn towards. “We are just sitting here and talking, but if I had to shoot this [as a scene] I would probably put a sniper camera from a window looking at you,” he jokes. “Blame Satyajit Ray”, he says — Ghosh grew up watching and learning from the Bengali master’s films — “He filmed the most boring thing — two people playing chess — and made it look like a thriller,” explains Ghosh. On working with Bachchan again, Ghosh shared, “You are in awe when he brings something you’ve written on paper to life. He owns every character that he does.”

Ghosh’s latest, Badla is about a young woman (Pannu) implicated in her lover’s murder, and her lawyer (Bachchan), famed for his trial preparations, who is her only shot at acquittal. The film has an interesting location in Glasgow, Scotland, which is not surprising given that all of Ghosh’s films have been set in places he has spent time in. “I can only use a place I really know, otherwise I cannot do its culture justice”, he explained, while he confessed to not being an avid traveller. “I really only know Kolkata and London, and perhaps Mumbai,” he emphasised. The idea behind setting Badla in Glasgow was to isolate Pannu’s character in a space where she is completely alone and helpless. Pannu’s dynamics with Bachchan’s character, whose job is to prove her innocence, becomes all the more crucial against such a backdrop. Ghosh has drawn on his own experience of “being alone” in a foreign land without a support system, which he lived through when he moved to London at age of 13.

What’s next for Ghosh after Badla? That depends on the film’s success, “There will be something next, if I can get a good report card,” he jokes.

The organisation has professional film critics and film journalists from around the world as its members. Source Related

Gresham’s Law in economics states that bad money drives out the good over time. What Bollywood music has witnessed over 2010s is a living musical embodiment of this law – a decade that started with so much hope and promise, comes to a close with a situation where each year has been competing with the […]