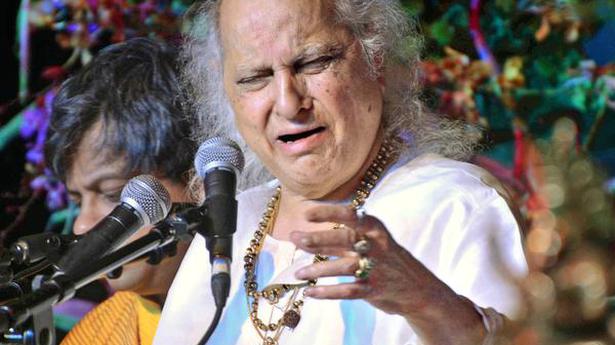 It’s Friday afternoon, and over lunch, Pandit Jasraj watches the India-Australia cricket match. He’s just completed a round of interviews, and his daughter Durga jokes, “How did you agree to speak to the media on the day of a match?” He smiles and says, “Nobody told me about the game earlier.”

The legendary Mewati gharana vocalist, who turned 89 on January 28, this year shows no signs of ageing. He’s dressed immaculately in a spotless white kurta and black sleeveless jacket and a scarf around his neck. His memory is crystal-clear and his sense of humour as sharp as ever. All through, there’s a sense of contentment in his speaking.

Jasraj is gearing up for the Golden Voice Golden Years concert, organised by Durga’s company Art and Artistes. Aimed at being a musical biography, it will feature Anup Jalota slated to perform ghazals, a tabla ensemble by Kedar Pandit and recital violinist L. Subramaniam, before he appears on stage.

“Why are we starting with ghazals? As a child, I was first exposed to the music of ghazal queen Begum Akhtar. The song ‘Deewana Banana Hai Toh Deewana Bana De’ would be played at a local restaurant near my place in Hyderabad. I would hear it again and again. Begum Akhtar, like Ustad Faiyaz Khan, had a cracked voice. But the magic these singers exuded was phenomenal,” he says.

Though Jasraj wanted to become a singer, other things beckoned. He recalls, “Not many know that I played Hindustani classical music on the guitar. Later, I began learning tabla from my second brother Pandit Pratap Narayan.” The singing lessons came from his eldest brother Pandit Maniram. Says Jasraj, “It required tremendous effort and practice. Of course, having learnt a bit of tabla, I got the rhythmic aspect quicker.” The singer accompanied Maniram for a few years. He says, “My first solo concert was in Kathmandu. I was 22. I sang Raag Multani and the Shiv bhajan ‘Gal Bhujang Bhasm Ang’. People appreciated my voice and the concerts became regular.”

Jasraj also learnt from Jaywant Singh Waghela, Ghulam Kadar Khan and Swami Vallabhdas Damulji, and soon took to teaching. He recalls, “I would teach some of Maniram’s students in Kolkata. In 1960, a young gentleman Chandrashekar Swami approached me to be his guru. It took a few years but after shifting to Mumbai, I began teaching him, Girish Wazalwar and Paresh Nayak.” Over the years, Jasraj has had many students. Besides vocalists, there have been violinist Kala Ramnath and flautist Shashank Subramaniam. “Of course I always accept a talented musician if approached. But I have never gone around looking for disciples. Today, one of my young vocal students is Swar, son of my nephew Rattan Mohan Sharma. His voice is shaping up really well,” he points out.

The conversation moves on to his specialities Haveli Sangeet, a form of Hindu temple music, and Jasrangi Jugalbandi, where a male and female singer render different ragas together. He explains, “My father Pandit Motiram sang the ashtapadis and Haveli Sangeet. So I decide to research them. Jasrangi Jugalbandi started when I heard my disciples Sanjeev Abhyankar and Shweta Jhaveri, and led me to think of a concept based on the principle of murchana (each of the 14 scales of seven notes which start on one of the seven notes of either of the two grama). Thanks to my wife Madhura, I also did ballets and dance dramas like Gita Govinda.” How much does he practice and teach, today? “Practice never stops. You cannot keep a car off the roads for long. As for teaching, my students keep coming over and practising. I keep observing them and joining as and when,” he says. When he’s not involved with music, the maestro spends time with his family, or watching sport. “Cricket is there, of course. I love hockey too. Sometimes on stage, when my disciples sing with me, I feel I am passing a hockey ball to them. They return it and I score a goal,” he jokes. Over his lengthy and illustrious career, one has lost track of the number of musical goals Jasraj has scored.

‘What about the Ravana inside you that wants to be heard’

For the past eight years, the National Centre for the Performing Arts (NCPA) has been holding the Contemporary Dance Season to showcase performances that combine innovation and cutting-edge choreography. In its ninth season this year, NCPA has some dance programmes by prominent artistes, which are not only entertaining and engaging but thought-provoking as well. Performances […]

Musicians around the world are going live, online

This one has pulled out all the stops, and we are more than a little starstruck by the scale of it. Their ‘Together At Home’ Instagram live series has already pulled in the likes of Pop’s blue-eyed duo Camilla Cabello and Shawn Mendes (performing together), Irish singing-songwriting hearththrob Hozier, and US-based rapper Common performing live […]

In a goof up, the International Film Festival of India (IFFI) attached veteran lyricist-poet Gulzar’s picture instead of legendary filmmaker Satyajit Ray’s in the director’s biography of Ganashatru on its official website. The screenshot of the webpage of the homage section of IFFI website, featuring Gulzar’s picture as the director of the 1989 Bengali film […]