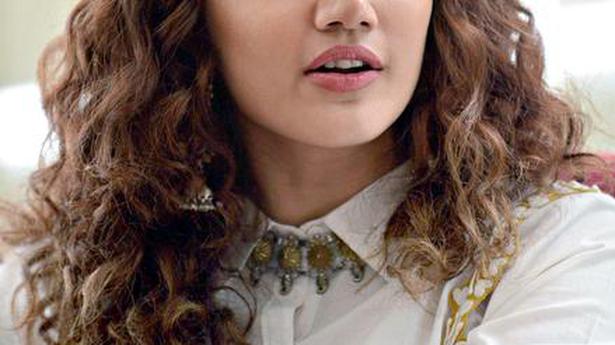 Actor Tapsee Pannu barely escaped the corporate life. According to her, if things had gone as planned, “I would have been sitting in an office like this somewhere as a marketing executive,” says Pannu, as we chat in a plush, sunbathed room at the office of Red Chillies, producer of her next film Badla. A qualified engineer, Pannu was all set to do an MBA. But after a fortuitous win at Channel V’s Get Gorgeous pageant, modelling offers poured in. In the spare year before the MBA, modelling offers “organically transformed into movie offers” from the South, in Tamil and Telugu (which she now speaks but didn’t then). Pannu says she warned them, “I don’t speak your language or know how to act”, but the filmmakers were confident about making her do both. She thought, “What’s the worst that could happen?” and decided not to “lose out on living life”. The idea was to “learn something new and come back and study”. As we now know, the return to academics never happened, as Pannu was inevitably snagged up by Bollywood.

Not a trained actor, did Pannu grow up watching and learning from films? Her reply is, surprisingly, no, as her parents weren’t movie buffs. She confesses that even now she barely watches films. She says, “I don’t like watching films on the computer or TV, but still enjoy watching the worst of the worst films as long as it is in a theatre.” The prolific actor’s busy schedule often involves location shoots, and most films are out of the cinemas by the time she has the time to watch them. She says, “It’s always a funny (and embarrassing) conversation with Mr. [Amitabh] Bachchan or Abhishek [Bachchan], or anyone who comes to [me] with a brief and asks about a particular film [as a reference]. 99% of the times I have to say no.” Of course she promises to watch them later.

About her acting process, Pannu says, “I do two things: I live my life normally — not in a cocoon — that’s enough for you to experience, observe, and absorb. Second, I try to react rather than act, so, a lot of credit for my performance goes my co-stars. And goes without saying, that when you have someone like Mr Bachchan next to you, you get the best cues”.

In her last film, Manmarziyaan, Pannu acted opposite Abhishek Bachchan, while Sujoy Ghosh’s Badla is her second film (after Pink) with the senior Bachchan. “Just left with Jaya ma’am and Aishwarya [to act with] now. Let’s hope that happens soon”, she jokes. Having worked with the Big B twice, she is more comfortable with him as a co-star but has the same kind of camaraderie with both father and son. “I don’t sit with my hands folded all the time in front of Mr. Bachchan; I don’t think he likes to be put on a pedestal. In Pink, we didn’t have as many scenes as we have in Badla, where his entire role is with me. Every day, we sat together for hours, bumped into each other during workouts. Now it seems quite cool: ‘an entire day with Amitabh Bachchan in Glasgow!’. But then, it was like being around any other co-star. I hope this film works because I would like to recreate our ‘jodi’”, she adds recalling their lawyer-client pairing, in Pink.

Badla’s suspense-thriller genre is a first for Pannu. Having a possibly duplicitous character means that there is a certain “acting within the acting”. Was this challenging? “When you’ve read the entire script, you know which layer you want to foreground and focus on to make it credible to the audiences. The difficulty lies in transitioning smoothly between these layers, otherwise the acting feels very false”, she responds.

The film’s director Sujoy Ghosh has carved out a space for himself in the suspense genre. Pannu and Ghosh had been trying to work together for the past three years. Pannu is full of praise for her director, “He is a joker and drives the set’s energy — so positive, so much fun – even in the most stressful situations, he comes up with something funny and cool to say. Badla was a joyride.”

Responding to the flak she received for acting in a film like Judwaa 2, post the “feminist” film Pink, the actor says, “I did it so that I don’t get typecast after doing films like Pink, Baby and Naam Shabana. Not many have seen my South films which are far more commercial. I didn’t want my Hindi audience and industry to think of me as “off-beat” and that I can’t do commercial films. I don’t mind “glamorous” roles and it isn’t really objectification unless you identify with and idolise problematic characters like Raja, which the film does not. [In Judwaa 2], Varun Dhawan plays Raja but also the [double] role of Prem, who doesn’t mirror Raja’s misogynist antics. There is a reason that one film easily crosses 100 crores, while others despite brilliant reviews don’t. It doesn’t depress me, as things are getting better with content-driven films but there is still a huge gap”.

This year, Pannu has three more releases, a Tamil-Telugu house-invasion thriller which will also release in Hindi, Mission Mangal, and Saand ki Aankh.

That was another era all together, which came alive with simplicity, poetry and romance. The ghazal wave was in full swing by the early 1980s, and besides a flood of private albums, the genre had made a mark in film music too. In harmony Over a decade before that, Rajendra and Nina Mehta had set […]

‘Coolie No. 1’ trailer: Varun Dhawan, Sara Ali Khan pull out all the stops

Congress opposes hosting of music festival in Goa amid pandemic

The Goa Tourism Department has given permission for the `Electronic Dance Music’ (EDM) festival which will be held at Vagator in North Goa district on December 27-28 The opposition Congress on Friday protested against the hosting of Sunburn EDM Festival in Goa amid the coronavirus pandemic. The State health minister, however, said people may attend […]