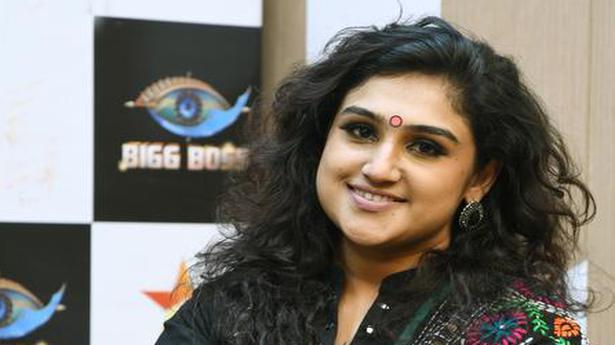 The first time actor-producer Vanitha Vijayakumar ascended the Bigg Boss stage before entering the house for the third season of the show, TV audiences across Tamil Nadu let out a collective gasp. Known for her outspokenness and penchant for drama, the daughter of actors Vijayakumar and the late Manjula was already popular for her viral YouTube interviews regarding her personal conflicts with family.

Less than a month since her entry, she has become the second contestant after Fathima Babu to be eliminated despite being a former Captain inside the house and a strong voice to contend with. Why? She believes “audiences thought I’d be safe and didn’t vote for me, I’m sure they regret it now…”

Love her or hate her, Vanitha most certainly couldn’t be ignored in the house —be it rowing some of the other housemates, fighting for her stand on several issues or assuming the role of an ‘akka’ to some of the younger models and actors on the show.

Two days since her exit, she’s much more calm and composed now as we meet her. Vanitha hasn’t had time to catch up on all the previous episodes yet, but she’s determined to. Excerpts from an interview:

What’s happened since your exit from the show?

After my time in the house, I had to reintegrate back into society, meet my kids, figure out some issues, and that took some time. I also slept to my heart’s content! After I stepped outside, it’s obvious to me I’ve been given this ‘terror’ tag: but I’d be lying if I said I didn’t enjoy it. My kids’ friends in school have apparently told them, “Please bring your amma to school as soon as she comes out of the house —we need her to put our teacher in her place!”

On social media, I realised that a lot of trolling has happened. It only bemuses me, do they think I actually care? Clearly I was popular. See I’ve dealt with divorce, re-marriage, family betrayal, lost my money… I’ve gotten so much perspective in life that nothing fazes me. I just want my daughters Jovika and Jayanitha, and son Vijay Srihari to grow up to be strong people I can be proud of. They are my only priority.

Did your elimination surprise you?

Honestly I was shocked because I was a strong contestant. You could see from the others’ reactions that they were too. I’m not able to ascertain what the audience want — do they want contestants who portray themselves genuinely or those who play a game? Let them decide that first. When I was nominated (which was expected) I didn’t think much of it — but the minutes my bags were packed and we were waiting for the announcement to come, I was in a frame of mind to leave.

I was always going to stay true to my personality: be blunt and to-the-face. Would you call Vanitha Vijayakumar to the Bigg Boss house and expect her to be anything else? But Tamil people.. Well, they can be fools. Listen, I’m a proud Tamizhachi and I love this state. But audiences here are easily manipulated and fall for a few tears! They sympathise with others too much. This is the same lot who pirate movies online and watch them

Do you miss anything about the show?

My friends! I believe Reshma has the nerve to go all the way through. She was my closest friend in the house and someone I shared a bed with. Believe me, I’m the least touchy-feely person on the planet, and for me to have a comfort level with someone on that level was unexpected. Sherin is a sweet girl —she thinks she’s really brilliant; but she’s not. Sakshi on the other hand has grown leaps and bounds under my mentoring and I’m so proud of her. I think we will all be friends for life.

Would you be open to going back on a wildcard?

Why not? It depends on my work schedule at that point of time, but given that I signed up for the experience, I’m definitely game to enter the house again with my antics. People may not want to see a powerful, dominating woman take charge, but I’m inspired by strong women like our CM J Jayalalithaa. That’s how I have grown up to be so independent. 25 years ago I wasn’t like this.

Do you think contestants are being genuine inside the house?

It seems like everyone’s strategy is to find a partner and cultivate a romantic angle on the show to stick around. All these love angles and triangles are totally fake.

But who can I love or fall for? Kamal sir only! I mean, why not? That’s why I openly flirted with him when he came on stage. We wait every weekend to see that handsome face. I’m used to handsome faces —even my dad and brother have them.

Has the experience given you any new perspectives?

I really want to do something commendable for women in the society — there are so many who are victims of domestic abuse or rape or other unspeakable crimes. They have nobody to turn towards. I’m sorry to say that the law isn’t effective yet in our country. I would be happy to start a support group for them, maybe an organisation to help survivors and heal them. Would it be via politics? I’m not sure, maybe…

What’s next for you on the career front?

I produced a film earlier MGR Sivaji Rajini Kamal which wasn’t a huge success, but I was happy with the outcome. Now I’m directing and producing a psychological thriller with a 13-year-old star-in-the-making in the lead roles. Can you guess who I’m talking about? It’s sure to catapult her to national fame and win her laurels. I took a break from acting earlier, but I play a role in this film. As for acting offers to come post Bigg Boss, I’ll definitely consider them.

A word on this season’s favourite: the Losliya army?

What’s with Tamil audiences and their love for names that end with ‘ya’? First Oviya and now Losliya. The former atleast had a mind of her own and wasn’t afraid to speak out and stand up to the others. But Losliya is a kid, she just stays mum and dances and sings once in a while. I’m sure she’ll come out of the house and act in a film with someone like GV Prakash soon.. It’s not like she’s going to act with Vijay! I have no personal qualms with her, but she’s definitely not deserving to win the title.

It’s a wrap for BUDX

By March, the music festival season is usually wrapped up in India — mostly because no one wants to host open-air, all-day music performances in the sweltering heat and impending rains. This weekend, the music showcase series, BUDX, is poised to close out the season with a bang, at Mehboob Studios in Mumbai. Electronic music […]

Although widely acknowledged as a doyen of the Marathi stage, it was his parts in Hindi cinema that made Dr. Shriram Lagoo a household name across India. Acting was his chosen vocation, even if he never quite discarded his credentials as an ENT surgeon. From 1952 to 1969 he balanced his medical practice with forays […]

Rajput donated ₹1 crore for Kerala flood relief in August 2018 in the name of one of his fans, Subham Ranjan. A month later, when flood ravaged Nagaland, he gave away ₹1.25 crore. Source Related